Need for Speed: Hot Pursuit 2 is my favorite racing game. Since its release over two decades ago, I’ve enjoyed many other games, but Hot Pursuit 2 stands apart for its singularly chaotic sense of spectacle, boasting more aggressive racing and enemy police than any other title in recent memory. Unlike follow-up Need for Speed titles like Most Wanted—which, as its name suggests, also emphasizes police chases—Hot Pursuit 2 involves races in which players must endure rather than evade police. The game’s closed circuit and point-to-point track structure, as opposed to later titles’ open-world cities, means that police will always trail closely behind, following the same closed course towards your destination. There is no means to circle around or hide from your pursuers; you can only temporarily outrun them at blistering speeds before they inevitably catch up or block your path ahead. Thus, the world of Hot Pursuit 2 resembles less a racetrack than a battleground, in which players must navigate a hostile world of police cars, spike strips, roadblocks, and even helicopters that drop bombs and shoot missiles to incapacitate racers. Just watch footage from the original trailer, which opens with cars flipping through the air and spinning wildly out of control. In Need for Speed: Hot Pursuit 2, racing is a full contact sport, a battlefield of vehicular carnage at high speeds.

The version of Hot Pursuit 2 that stands the test of time is the PlayStation 2 release developed by EA Black Box, the team responsible for nearly all subsequent Need for Speed games up until Need for Speed: The Run in 2011. The PC, Xbox, and Gamecube versions developed by EA Seattle appear similar, but have a different handling model and an overall sterile and flat look in opposition to the PS2 visuals, which have more grit and contrast. More pronounced textures like smoke from skidding tires or clouds of dust when driving off the tarmac create a dynamic environment that emphasizes movement and speed, contributing to a stimulating and exciting visual language. 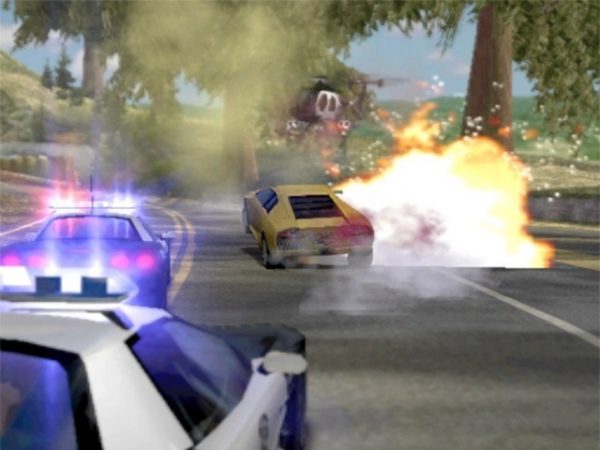 This sense of dynamism and urgency extends to the fantastic track design of the game, which opens up into an array of unmarked shortcuts and forking paths, some of which are simple cuts around corners while others involve elaborate passageways through hidden caverns or a spiderweb of crisscrossing paths that slice up a city. Since many of these possible routes intersect one another, tracks become dangerous staging grounds for dramatic collisions at high speed, such as this great example I’ve timestamped from the National Forest track, which opens with a frenzy of cars speeding from different directions. Moreover, the dramatic elevation changes of each track obscure lines of sight, propel cars on long downhill straights, and create opportunities for perilous jumps. Turns are also wide and sweeping, capable of being driven at top speeds. These breakneck tracks, mixed with the busy visual frame, results in chaotic races that demand much from the player, all before police chases even come into play.

The implementation of police chases in Need for Speed: Hot Pursuit 2 dramatically heightens the intensity and unruliness of races, turning each track into a gauntlet of impending dangers. While police have been present in previous games as early as the very first Need for Speed installment, their aggressiveness is dialed up significantly here. The game boasts a Grand Theft Auto-style wanted system, in which blowing past a cop car begins a pursuit at a one star wanted level. As the pursuit progresses, your wanted level gradually increases, bringing with it more aggressive police AI, backup pursuit cars, roadblocks, and helicopters. Police cars behave like enemy combatants, deploying a number of sophisticated tactics to run your car off the road. They may speed ahead or alongside your car in an attempt to box you in or bait you in a certain direction, or they may execute a pit maneuver by nudging the rear corner of your car to spin it off course. A slam from a police car is powerful, weighty, and consequential, costing precious time if you find yourself turned the wrong way after a high-speed collision. When parked police block the road ahead, hitting them is akin to slamming into a brick wall, grinding your car to a near halt and requiring players to recover quickly or risk getting busted. Likewise, the occasional spike strip completely ruins tires, permanently slowing you down to below 30mph. At the highest wanted level, police will dispatch helicopters that shoot missiles or drop explosives on the road that must be dodged, lest your car be thrown into the air and drastically slowed for a few costly seconds. 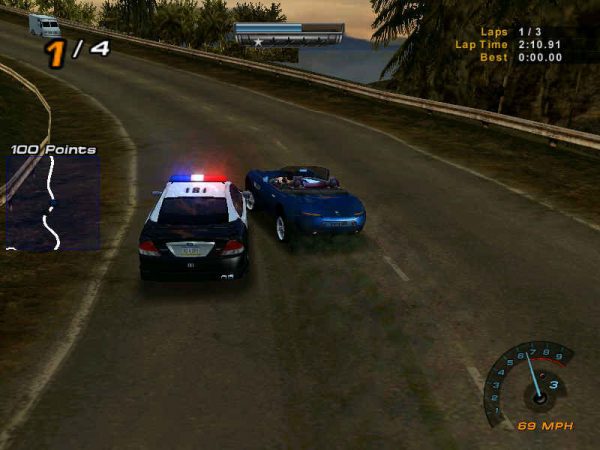 At this highest stage of a police pursuit, forces will litter the road with so many explosives, spike strips, and roadblocks that they become unavoidable, especially when aggressive opponents and police ram you into them, or a rival racer detonates an explosive and is flung into your path, creating a frenzied, deadly spectacle determined to deter you from finishing a race. The sheer length of tracks and the types of race events make playing Hot Pursuit 2 feel like endurance runs to outlast the onslaught. Lap knockouts, for instance, involve racing against four or five cars, with each lap eliminating the driver in last place until only one remains. Incredibly long track lengths mean that each lap can take upwards of three minutes to complete, adding up to ten to fifteen minutes for a mere four-lap race. As police intensify their assault and bombard racers with all their firepower throughout those laps, your car will roll across the finish line looking blown apart and shattered even if you manage to outmaneuver their offense.

As players are allowed only three busts by police before it’s game over, these races must be navigated defensively. Players have a few tools at their disposal, such as the constant police radio chatter that alerts when roadblocks or pit maneuvers will be deployed, allowing racers to plan accordingly. While players lack their own arsenal of weapons to fight back against police, they do have a passive ability: a means to temporarily pause the race to either scan ahead about a quarter mile down to see what’s ahead, or a 360-degree camera rotation around the car to observe what’s immediately around them. These tools are brief moments to take a needed breath as a 200mph race comes to a standstill for a few crucial seconds, allowing players to survey their environment and react accordingly when the game resumes at full speed. 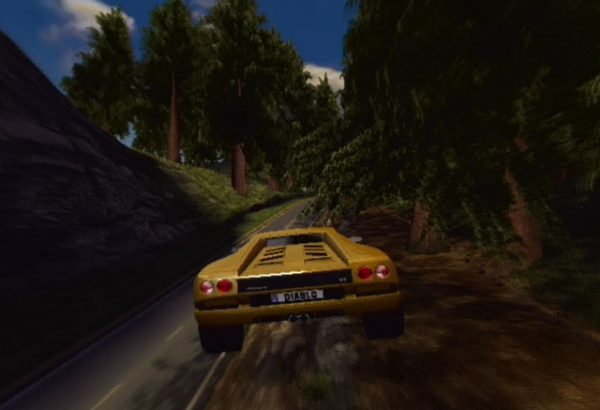 Wanted stars cannot be decreased; the police onslaught must be endured until the completion of the race or police withdraw entirely if a race is long enough. The latter scenario is rare, requiring players to maintain an aggressive four-star pursuit for multiple laps and ram pursuit cars off the road all the while. Here, racing gameplay gives way to Burnout-style takedowns two years before Takedown’s release in 2004, in which players bait or ram police aggressors into oncoming traffic or a tree by the road. The aforesaid shortcuts that crisscross racing paths thus become a valuable means to stage violent crashes as you swerve away to safety at the last second, but this is risky at top speeds. With little at your disposal, defensive driving maneuvers are all the player has to outwit and outlast police and belligerent racers alike, making use of shortcuts, jumps, and oncoming traffic as environmental tools to aid in a race. Need for Speed: Hot Pursuit 2 is also one of the last great arcade racers without a boost function (save for police vehicles), meaning that racing is at its purest form here, an intense display of battle and driving skill rather than a series of expertly timed nitrous boosts. This stripped-down approach to racing gameplay to its bare essentials—accelerating, braking, and turning—makes racing in Hot Pursuit 2 feel so rewarding and battles against police so challenging and intense. Lacking the weaponry of the game’s formidable police forces, your comparatively vulnerable racecar makes each win feel monumental, with razor thin margins for error.

Everything is out to ruin you in Hot Pursuit 2, from police adversaries to the environment itself. One track blasts through a raging forest fire and thick smoke, while another funnels drivers through a sandstorm, causing players to drive blindly through part of the track. The experience of playing the game is that of feeling just on the verge of veering wildly out of control at any given moment: land a jump too fast and collide into a wall, suffer a sideswipe from another car and careen into the abyss. Its face-melting action of bullish police and racers is the ultimate gauntlet through which one must push their driving skills to the limit. To race in Hot Pursuit 2 is to endure, to outlast, to survive.