Videogame development is a process fraught with all sorts of difficult tradeoffs. Part science, and part dark magic—both of which which involve lots of spreadsheets—even veteran developers often find their projects barely resembling what they set out to create. Within the industry, the observation that “it’s a miracle that most games ever ship” doesn’t downplay the passion and effort that development teams pour into their projects, rather it emphasizes that even the best-prepared studios often struggle with shifting priorities, politics, and the sheer scale of managing dozens of contributors in one of the most complex interdisciplinary endeavors there is. Even a “simple” game development cycle may require major effort to resolve technical, design, and creative challenges, the solutions to which are likely mutually exclusive and specific to the game being developed. Without extensive industry experience, it’s actually quite difficult to envision what really does go into bringing a new game into being.

This is unfortunate. If there’s one thing that repeated waves of videogame controversy have shown, it’s that the disconnect between the people who make games and those who play them has never been wider, and misconceptions and misunderstandings abound. Which is why Jason Schreier’s Blood, Sweat, and Pixels is an important read for anyone wanting a better understanding of what goes into modern game development, providing a painstakingly researched but accessibly written look behind the curtains at a variety of major game development studios. It tells, largely in the developers’ own words, of the trials and tribulations that went into the creation and release of nine successful titles and one dramatic cancellation. Those familiar with the major releases of the past few years will likely recognize most of the games chronicled, but the behind-the-scenes look at their production is almost certainly new information for those without significant experience in the industry.

Jason’s writing does a masterful job of fleshing out the histories of the games he covers, allowing readers to palpably experience the drama unique to each one’s creation. Diablo III’s  decade of laborious development barely resembles Pillars of Eternity’s scrappy, last-ditch attempt to parley a wildly successful Kickstarter campaign into financial salvation for developer Obsidian Studios. And you can feel the tension Uncharted 4’s developers must have experienced when a leadership change caused much of the game’s existing development being discarded to align the final game with the new leads’ vision. Despite the effort poured into planning, the development process for every game always manages to find some new set of challenges for the team to figure out how to overcome.

While the circumstances behind its creation provide a game’s backstory, the real character comes from the people that make up the team tasked with realizing the vision. Interpersonal conflicts and office politics provide limitless dramatic tension, which ultimately shapes the final project. As a result of Obsidian’s financial constraints, several key members of the Pillars dev team had to pledge their jobs as collateral to get the resources they needed to finish the project. It’s surprising just how many of the smash hits the book chronicles came within a hair’s breath of not only failing to release, but taking the studio down with them. Production difficulties like this don’t fade away if the game does manage to ship, though—the struggles become part of the DNA that shapes both the game itself and the future course of the studio. 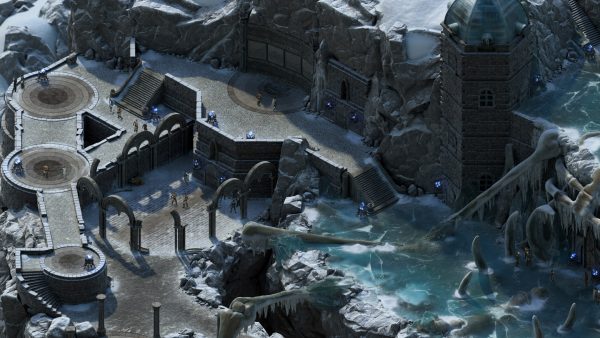 Ironically, Blood, Sweat, and Pixels’ greatest weakness comes from the lack of diversity in outcome for the projects it surveys. With one major exception, the games Jason has investigated not only eventually shipped, they went on to critical and commercial success, many of them becoming the benchmarks for success of their genre or platform. There’s certainly value in seeing how even massively successful games almost universally struggle with tortured development cycles, lest one think such issues only exist for less-experienced teams with more modest budgets. But one must be careful about letting survivorship bias distort the message that the stories present. Given that crunch in game development is a recurring topic in broader games discourse, it’s fitting that every story Jason shares touches on the subject, but it can be dangerous to show crunch only when it ultimately leads to the success its creators hoped for.

Naughty Dog’s development of Uncharted 4, in particular, describes in agonizing detail just how demanding the studio’s acceptance of “crunch culture” was on its employees. Worse, it makes it clear that crunch has been internalized within development culture. Neil Druckmann, creative director for Uncharted 4, bluntly stated that the only way he thought that crunch could be solved was if you “don’t try to make Game of the Year.” The universality of crunch in the accounts chronicled certainly lends credence to his claim. However, accepting this premise is dangerously close to the problematic narrative that those who put in the time reap the rewards, and any developer whose game fails to achieve that level of success must have somehow failed to work as hard as they should.

The Stardew Valley chapter does provide a helpful counterpoint to this, with its much more intimate focus on the game’s sole developer Eric “Concerned Ape” Barone’s four-and-a-half-year journey. By detailing how burned out the years of constant crunch left him, despite working on his dream project, Eric’s story puts the human cost of the practice in sharp focus. Of course, it’s hard to feel too strongly about the dangers of crunch when the story ends with the protagonist becoming a multimillionaire. Still, the honest look at the struggles and emotional toll that come with constant crunch is a welcome addition to a conversation that often fails to get beyond talk of passion, drive, and vision.

Altogether, Blood, Sweat, and Pixels is a fascinating look at a process that is far too obfuscated for its own good. By accessibly presenting the messy process that brings the games we play from imagination to reality, it’s a worthwhile read for anyone with an interest in videogames. Players will find a new appreciation for the amount of work that goes into creating games, as well as a greater understanding for the necessity of delays and the “broken promises” that arise from development constraints. Critics can use this glimpse at the machinery that produces games to better inform their analysis of the nuances that go into translating artistic vision to a fully-realized whole. And certainly anyone with a desire to be a part of the industry should take advantage of this chance to learn a bit more about how it functions, calibrating expectations and equipping themselves to better navigate a demanding field. This invaluable look behind the curtain gives an important dose of transparency to a medium that sorely needs it, and Jason manages to achieve this important goal while remaining engaging and pleasant to read.