The characters of Fumito Ueda’s games are outcasts—the horned protagonist banished by a fearful village in Ico, the lonely colossi of Shadow of the Colossus, and the shackled and spear-riddled creature of The Last Guardian. While other characters may shun and exile these figures, Ueda compels players to reconsider their worth as these games unfold, urging a sense of patience and empathy via deeply humanist stories. Patience is key in all aspects of his games, from forging relationships with other characters to slowly maneuvering through derelict landscapes. Fumito Ueda’s games, particularly The Last Guardian and Ico, adopt gameplay mechanics that oblige patience and empathy to more specifically address themes of communication and its failures. The two games center around the trials encountered by a pair of characters unable to communicate with each other, either because of a language barrier or because one must cooperate with a mysterious mythical creature. Thus, The Last Guardian and Ico necessitate that players unlearn linguistic relationships with another character, instead underlining universal ways of communicating such as touch or simply reaching out with an open hand.

In an illuminating interview with Fumito Ueda by James Mielke for Glixel, the developer responds to the question of whether the griffin-like creature Trico can become more obedient over the course of the game, asserting, “I didn’t want to include it into the advancement of the game because then it would make it a ‘cultivation’ game where the object of the game would be to nurture Trico.” By envisioning Trico as more than just a simplistic entity to be tamed and therefore “won” by the player, Ueda grants an unexpected agency to the character that defies the norm. The common complaint about The Last Guardian is that Trico stubbornly fails to respond to commands given by the young boy, but such grievances fail to apprehend the central relationship between the characters and the game’s broader theme: the difficulty of communication. Indeed, there exist barriers to communication not only between Trico and the boy, but also between the game and the player because The Last Guardian selectively omits from the subtitles of its fictional language certain information such as the young protagonist’s name. Ueda suggests in the Glixel interview that some characters call the boy’s name but the subtitles do not specify it; comprehensible language is present but not in the service of the player.

The Last Guardian returns to themes and gameplay mechanics introduced in Ico, depicting the escape of two characters from a cryptic fortress hideaway and the necessity of mutual effort despite an inability to communicate. The game is unhurried, with Trico ambling leisurely at its own pace because the creature doesn’t understand the stakes of the game and the boy’s need to return to his village. Trico is content regardless of the boy’s wishes to escape and rejoin his family, thus causing a disjuncture in urgency. The boy (and thus the player controlling him) wants nothing more than to progress through the labyrinthine ruins, contrasting Trico’s decelerated aloofness and bouts of mischief. Videogames are a medium where players have come to expect direct consequences for their actions, and a lack of feedback is often cause for complaint that gameplay is “unresponsive” or that an AI is “stubborn” or even “broken” without considering the possibility for deeper meaning. Instead of straightforwardly criticizing these systems, perhaps they can play into broader themes of the game. In The Last Guardian, the lack of feedback reflects the characterization of Trico. The winged beast maintains its own agency outside the interests and desires of the player, and players’ frustration in commanding Trico falsely assumes that the creature can even understand the boy’s language and his goals. 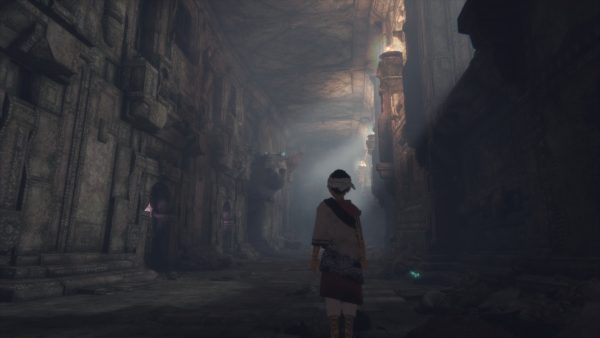 Trico sometimes fails to immediately comply to the boy’s commands to jump or move forward, like a guarded pet unsure of new places or strange people. While Ueda certainly does not intend for every stubborn behavior to be read as petlike, Trico remains a complex figure that thoughtful players (especially those who have had pets) may appreciate beyond just a piece of AI. Translating living things via direct lines of code that can be manipulated and exploited by player interaction suggests a cynical view of behavior, where emotions are reducible to algorithmic solutions. By instead granting Trico its own agency and desires outside the will of total player control, The Last Guardian upends the expectations of the medium, regarding Trico not as a submissive tool for the player but as akin to a living creature that requires empathy like all other animals. Only through patience and understanding can players effectively harmonize with Trico and acknowledge the pain and suffering that the beast itself carries throughout the game.

Trico is not an exploitable object in the game to be snapped at by the player, but an animal with its own insecurities, curiosities, and wildly oscillating temperament. Like Hayao Miyazaki’s work in films like Princess Mononoke or Nausicaä of the Valley of the Wind, Fumito Ueda treats animals with reverence. Trico may ignore the boy and wade into a puddle like a joyful dog, and the horse Agro in Shadow of the Colossus often chooses not to obey the commands of the player. In the aforementioned Glixel interview, Fumito Ueda tellingly alludes to the photographer Gregory Colbert as an influence for the game, and his exhibition Ashes and Snow shares a thematic emphasis on the kinship between humans and wild animals with The Last Guardian. In both works, a sense of understanding is conveyed through touch; despite the barriers to communication, the possibility for empathy remains open. The Last Guardian steadily builds a relationship out of mutual respect gained over the course of the story, rewarding gentleness and care towards Trico and not absolute mastery over the animal. The young boy must calm the beast when he goes mad with rage upon thrashing the antagonistic stone soldiers confronted in the game by petting him to relieve his anxieties. A gentle touch communicates volumes; by petting Trico, its eyes turn from an angry red to a pacified green, signaling that Trico feels safe and unharmed. In turn, Trico rewards the player by allowing the protagonist to latch onto its fur to climb up to high places or leap over a barrier. Small moments like Trico nuzzling the boy to make him laugh or the boy helping Trico to scratch behind its ear punctuate the grander codependence of the two characters as they navigate the crumbling infrastructure of these ancient walls.

Fumito Ueda has investigated themes involving these difficulties in communication as far back as the late 1990s, as similarities can be found in early demos of Ico, another game squarely about characters working together to escape imprisonment despite a language barrier. Like the boy in The Last Guardian, Ico’s title character cannot issue complex commands because his companion Princess Yorda cannot communicate intelligibly back to him. In cutscenes, Ico’s words are translated via subtitles in English, but Yorda’s words are abstracted with odd hieroglyphics. Since the two characters cannot effectively communicate using words, Yorda is often left aimless and idle while Ico navigates the trickier puzzles and hard-to-reach areas of the eroded castle terraces on his own. When they must communicate in order to complete a puzzle that requires effort by both, Ico and Yorda communicate via actions. Although Ico wordlessly traverses the landscape and solves puzzles that block the way, he must return to the immobile princess and guide her by hand because they cannot exchange complex instructions to navigate. 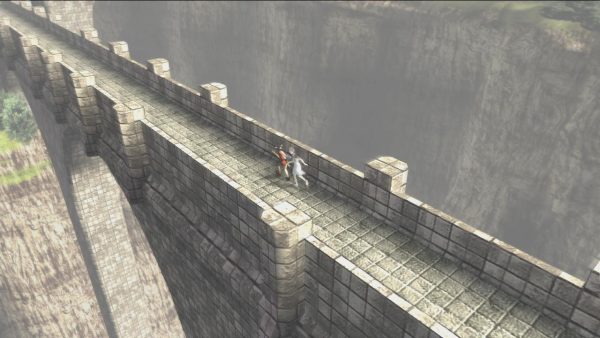 In lieu of verbal communication, Ico defers to meaningful actions as a way to convey solidarity. Videogames often feature “escort missions,” but rarely do such stories suggest the deep bond between characters in the way that Fumito Ueda’s games do. Ico’s act of holding hands with Yorda as they maneuver through the colossal ramparts of the fortress communicates to the player their unyielding trust. Yorda’s few words and phantomlike inertia eerily counter Ico’s solitary forward action. Ueda underlines their vulnerability in a gorgeous, virtuoso moment as the two characters dash across a towering bridge, with the camera’s faraway, widescreen shot highlighting the architecture absolutely dwarfing the characters. The scene has genuine mystery; both characters are uncertain about the other but are linked by circumstance, bound together against the cryptic hostility of a broader world even more resistant to understanding them. Ico is exiled by a superstitious village fearful of his horns, while Yorda is trapped by the selfish Queen who does not want her straying beyond the castle grounds. To offer an open hand serves as a meaningful communicative act because these characters have been denied empathy and understanding on their own terms. Even the fight scenes in Ico are not about self-preservation because shadowy demons emerge not to eliminate Ico but to abduct Yorda, and Ico must reach towards Yorda when she is pulled into the clutches of their evil (a relationship meaningfully reversed in The Last Guardian). Many games emphasize the individual champion, but Ico resists this tendency down to the act of saving the game. The stone benches that function as save points require both Ico and Yorda to rest in peaceful slumber, and the latter’s absence requires Ico to guide her by hand to safety.

These small actions in the games of Fumito Ueda—holding hands, petting an animal, sitting together—represent a riposte to the individualist tendency of videogames where everything is knowable and conquerable. Instead, The Last Guardian and Ico suggest that while we may never fully understand others outside ourselves, there may be just enough to get by. We may not comprehend the motivations of Yorda or the fears and apprehensions of Trico, but we (and the characters) nevertheless feel the palpable emotional connection necessary to develop a bond with another living thing. In the absence of linguistic harmony, Ueda’s stories are keyed into the minutiae of communication like delicate gestures and even physical presence to assure another that they are not alone. The failure to communicate does not represent an artistic failure; given Ueda’s ever-present interest in languages and interaction, what characters cannot understand clues us into what crucial things they can.

Tags: Ico, Shadow of the Colossus, The Last Gaurdian
← Art Tickles: What It Means
Off the Grid: Shantae ½ Genie Hero →