Hyper Light Drifter is a partly autobiographical game. In it, a cloaked drifter wanders an unfamiliar, overgrown wasteland in search of a remedy for their terminal disease. Heart Machine lead developer Alx Preston similarly battles serious heart ailments, and life-threatening scares have pursued him throughout his life. “I’ll always be in and out of hospitals,” Preston remarks in an interview, noting genetic mutations, congenital heart disease, and ailments in the digestive and immune system as health issues that have resulted in pacemakers, countless pills, and open heart surgery. While the drifter’s disease is never fully explained, we witness its symptoms in small moments throughout the game as the beleaguered character coughs up neon pink blood, struggles to stay upright, and sometimes passes out entirely. This vulnerability is present not just in the character’s body, but is also paralleled by the world they inhabit. Hyper Light Drifter visualizes a dying ecosystem littered with the collapsed remains of a bygone civilization, as though the vestiges of an organic world are kept alive via synthetic parts and wiring barely distinguishable from the vines and flora that intertwine it. The game’s correlation between personal and planetary decay suggests that human life, like the entire ecosystem, remains in a state of fragility even as life daringly endures.

The wordless, dreamlike opening cutscene immediately establishes this analogy between individual illness and global catastrophe. Strange machinery triggers an apocalyptic detonation that turns a lush civilization into a toxic red hellscape. Threatening titans loom among distant industrial ruins that once housed a thriving society. The drifter then appears, violently coughing up their insides as the character reckons with annihilation and decay on a personal and global scale. Racing up a flight of stairs, the drifter encounters three colossi, their eyes glowing with life before a lightning flash reveals them as husks of disintegrating steel, blowing in the wind like dust. This is our macabre introduction to the world of Hyper Light Drifter, but a few minutes of gameplay reveal that this post-apocalypse teems with life. Waterfalls feed into rivers and tributaries to irrigate a verdant jungle and sustain its grazing animals and canopied vines. At the same time, this world reeks with the stench of death. Rot hides in the meadows and lurks beneath the waters, implying an ancient conflict long passed. The game invites players to explore its ancient ruins, discovering older histories concealed among new growth. 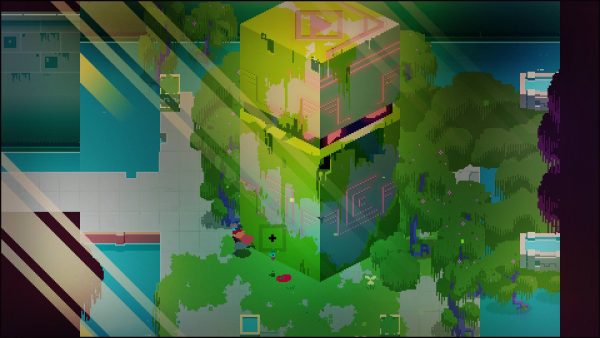 Because the game lacks any recognizable written or spoken language, players are faced with a steep learning curve not just to converse with marketplace vendors but also to simply understand the backstory of the game’s world. Instead, Hyper Light Drifter conveys much of its pre-apocalypse history through wordless environmental design and brief snatches of pictorial dialogue communicated as comic-like panels. Through exploration and short interactions, we’re able to piece together a narrative concerning a war between titans and an advanced civilization, and that this conflict left both sides obliterated as a new society arose from the old. Traces of apocalyptic struggle hide within the landscapes, juxtaposing the emergence of new life with the decay of a bygone world. Behemoth corpses serve as new environments within which things grow. For instance, the calcified ribcage of a giant juts out from the earth like a rock formation overgrown with colorful moss, creating new terrain. A titan half-submerged in azure wetlands forms new islands where its head and fingers break the surface of the lagoon. Despite the ubiquity of death, Hyper Light Drifter is a game about continuation and the possibility for an afterlife, in which death and decay sustain the environment.

Deeper travel into the frontiers of the game reveals further evidence of warfare and grim histories of destruction. The physical traces of this doomed war adorn the landscape, evoking Hayao Miyazaki’s film adaptation of Nausicaä of the Valley of the Wind and its toxic wasteland where life has adapted to fit the harsh new reality. Expansive laboratories and factories house horrible machines and robotic weaponry half-constructed in assembly lines. Such environments bespeak a history of fear as the ancient civilization struggled to manufacture an army to combat the titans. The mutually assured destruction that eradicated both sides gives way to strange new wildlife including cybernetic toads that belch out tentacular offspring or agile spiders that spring out from crystalline ice. To the west lie military battalions strategically positioned along lonesome canyons, but the soldiers remain forever petrified in crystal coffins as though flash-frozen in the middle of battle. Like a museum diorama behind glass, the crystalline troops grip their rifles and pose mid-yell as they lead a tragic charge against the titans, guns no longer aiming at living targets. Likewise, a downed colossus sprawls before them with jagged, icy stalagmites piercing its corpse like mold eating away at the remains. The overgrowth of red trees and vines blanket the scene, with both sides of the conflict lost to history as they decay. Here, the old is constantly being reclaimed by the new, which has mutated and adapted with the harsh new status quo of the world so that life may continue. 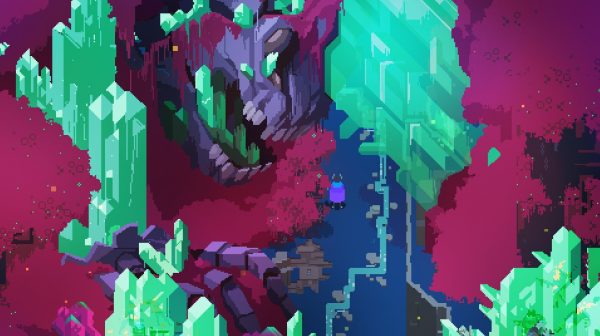 Hyper Light Drifter seems to say that if we can’t come to terms with and find peace with the certainty of death, then we can at least acknowledge its presence. The game’s incredible difficulty means that death will become familiar to players, contributing to what Boen Wang perceptively describes as a tone of “melancholy resignation.” The drifter’s brisk movements—dashing away from an enemy attack, and chaining the motion with a stunning sword slash or breakneck gunfire to complete the kill—renders skirmishes over in mere seconds. The quickness of battle means that the game is remarkably lonesome throughout the drifter’s pilgrimage. Even as the hub world flourishes with the inklings of a small settlement making do in the ruined, hollowed-out concrete shells of a shattered city, the surrounding barrens lie in silence. Apart from vicious wild animals and hostile rogues, only the sparse individual campsites of nomads exist in the remote frontiers of the land. This haunting emptiness suggests the precarity of it all: once there was a world here, and now it’s gone. When the drifter retraces their steps through an area with freshly slain enemies, the solitude of the game becomes even clearer. The drifter will step over the newly deceased, bloodied corpses symptomatic of their swift savagery, but there are older remains here too. Skeletons, vestiges of a past we can never fully know, rest among the trees and fields and can be smashed like brittle rocks by your sword. These splintered bones are no longer living creatures but are just part of the landscape. Its destruction, turned to dust with a faint thud, erases the last physical traces of the dead from this world. As the drifter journeys across this unforgiving frontier, they will encounter living things cruelly eviscerated by both the environment and their own hand, continuing a cycle of decay and regrowth.

Amidst the desolation of the wasteland, a familiar face will recurrently greet the drifter, offering temporary reprieve from loneliness. This other nameless warrior, accompanied by a stately black dog, also suffers from a mysterious illness, coughing up blood and ostensibly also seeking the medicine to reverse their pain. In the world of Hyper Light Drifter, even friends cannot escape the arbitrary cruelty of an early death, but these short moments of shared hardship and contact quietly celebrate life despite its fragility. At points throughout the game, the drifter will hemorrhage blood when health is low, leaving behind red tracks that remind players of death’s unbroken pursuit. Like the colossus embracing a mountainside half-buried in snow or the fallen giant crumbling with the rusted machinery and wiring of an abandoned biolab, the drifter will soon share a similar fate. Regardless of the cure, Hyper Light Drifter recognizes the inevitability of death and that the drifter will eventually join these other skeletons, resting among the ruins of the world. 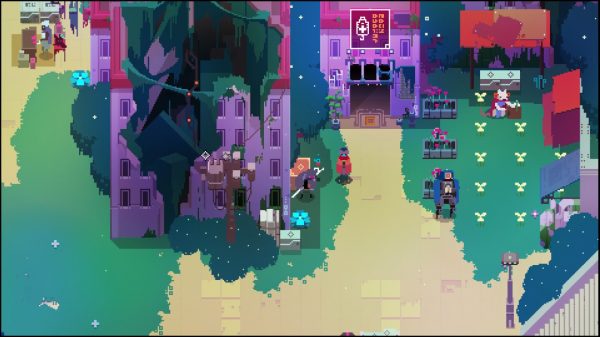