Allison Winters has an “F” in evil.

In the middle of a frozen lake, wielding a sword she stole from a man she “accidentally” killed, is the “heroine”, ready to face a rival she didn’t know she had whilst a bunch of drunk ghosts heckle her with hints on how to defeat said rival.

Underhero is a game that rises above most parodies in that it actually weaves a cohesive plot that allows for bigger punchlines to its setups, instead of going for the easy internet culture jokes and an excuse of a plot. Jokes come naturally and you find yourself smiling at the pure absurdity that you’ve just witnessed. Things that first seem goofy – like a shark on a scooter – develop into fully-fledged subplots. Why does the shark use a scooter? Can we use that to defeat him? It’s a game that is all about the pay off, from the jokes to the story to the characters.

Characters that are written off early as just a quirky little joke come crashing in with a much more sinister role. The game’s humor slowly takes a darker turn with little things here and there becoming a bit more ominous if you think about them for a minute or two. The story starts with our accidental heroine is tasked with returning the macguffins to boss monsters for the next hero to collect again. However it eventually becomes a very introspective tale about what it means to be a hero while never losing its odd sense of humor  Once the plot started showing its true colors, I was hooked. When the big reveals are thrown around near the finale it’s less out of left field and more “oh, that makes perfect sense now.” 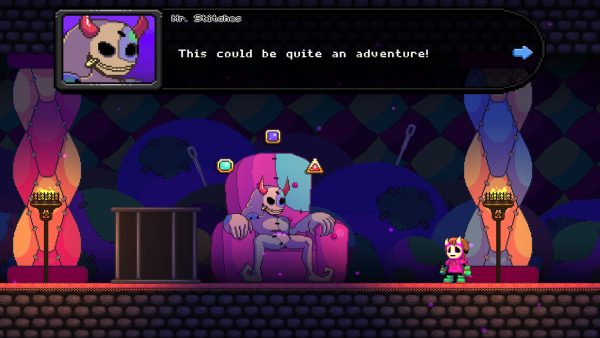 The story makes a slow descent into darker places, yet I couldn’t point out an exact moment when the tone completely changed. It’s a series of subtle changes that compound organically. Minor creepy notes like main villain’s wild mood swings from manic to terrifying that are hidden among lighter fare like gangster ants and a sassy talking sword. If you told past me that I’d be sobbing by game’s end I’d call you crazy. Yet there I was, crying like it was any given weeknight at my house, at a game that had had me laughing and smiling not that long ago.

Characters have wonderful arcs and the game really plays with the idea of what it means to be a hero. Our intrepid heroine starts her journey after accidental homicide and ends it ready to willingly jump headlong into sheer madness to save those she calls friends. It’s a perfect contrast to the male hero we play as before his untimely death early in the story. The Hero is doing his duty without question with a talking sword that is clearly going through the motions. The heroine is instead doing what she knows to be right and that same companion has shed that aloof facade and ready follow the heroine till the end.

Underhero is the kind of game that I want to spout cliches about, maybe even call it an instant classic. Instead, I’ll leave you with the fact that I laughed, cried, and swore liberally. Saying any more will spoil this instant classic.

Tags: Underhero
← The Superheroic Vertical
Let’s Place: The Forest With No Trees →