Let’s Place: The Forest With No Trees

Starting a new game, apart from the story, characters and mechanics, I’m often given a map and an excluded piece of land to operate within. The area is gridded with paths and invisible patricians that can limit my movements, yet at the same time provide me with a sense of understanding or even ownership over the territory.

Nature can hide the dangers of this land, as well as give birth to mythical creatures and monsters generated by my fear and imagination. But it can also give me a shelter from those dangers. I walk through the narrative, and try to keep close to the paths and roads while I don’t have enough XP to tackle the dangers that might await me. I start to move freely, familiarise myself with the setting, until the map has no areas left uncovered and becomes fully transparent.

The landscape I’m placed in is not just a decoration – it responds to the story I play, absorbing its tension. It provides ground for the narrative and presents the constraints of the mechanics. It teaches me how gravity works, what the limits of my abilities are, whether I can swim in this water or will drown instantly.

I want to talk about these notions of forests, nature, and landscape, as presented in three games: Firewatch, Horizon Zero Dawn, and The Vanishing of Ethan Carter, to look for the specificity of those settings and what new possibilities they present. 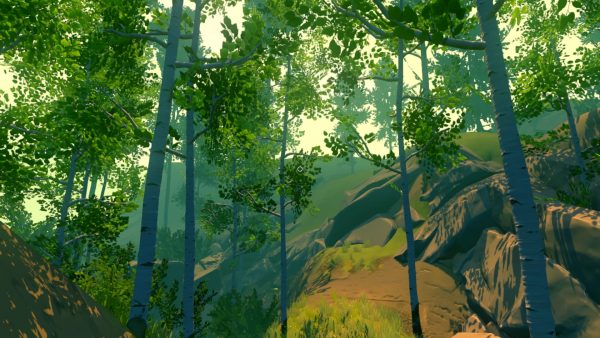 Forests in Firewatch: places to hide and be hidden

In Firewatch, I play as Henry, a man who goes to work as a fire lookout in Shoshone National Forest. His wife is suffering from early dementia, and he runs from the frustration to the forest, recently recovered from fire.

The setting is peaceful, yet tense: the beautiful landscapes of the national park are intertwined with the narrative in the beginning of the game, unfolding a story of Henry and his wife Julia. He takes one day at the time. He settles in: the tower opens an overview on the forest, yet every day Henry has to come down to face smaller problems. The view changes accordingly: from distant observation to closer takes. Reflecting the contrasting issues Henry is dealing with, like figuring out his life and fixing the communication line, the forest tricks you into believing that something unsettling is happening there. As the story unfolds Henry is getting anxious — teenage girls went missing and he is the last person to have seen them, and their encounter unfortunately can be interpreted in a bad way for Henry. Then he starts noticing that he is being watched, he even finds the incriminating transcription of his conversations with his supervisor Delilah. All of that is happening inside this beautiful, peaceful and indifferent forest.

By the time Henry finds a suspicious monitoring station, his anxiety (and mine too) got so amplified, that after finding the logs that kept track of Henry’s movements, I had the distinctive feeling that Henry indeed is in danger and must flee the scene immediately. Only at some safe distance, I was able to see that nobody was chasing me, and there were no threat present. I was tricked by shadow of the story reflected in the dusk scenery, where even mundane things like being stung by a bee get involved with building up the suspense.

The forest comprises most of the visuality of the game. There are not many elements of interface: only the circle in the middle of the screen, which serves as the constant to relate to, and some buttons showing up when there is a possibility of the interaction with the environment. The rest is left to the fields, creeks and endless forest, which fuel my imagination into generating things that are not there, while chasing the mystery the park hides.

In his The Ground of the Image, french philosopher Jean-Luc Nancy makes the distinction between garden and landscape. Where garden is the piece of territory associated with the predefined place of dwelling, which in turn makes it familiar, impossible get lost in, no matter the scale. Landscapes on the other hand, “open onto the unknown”, presenting the absence of a presence. It is where my sight and mind are lost by default. Where does this place the national park, as recreated by designers and artists in videogame between those two modalities? And is it possible to get lost in the forests of the game?

Natures in Horizon Zero Dawn: we used to microwave, now we just eat nuts and berries

In the beginning of the Horizon Zero Dawn I was taught to hide in high grass, while hunting the machines for parts. This world is somewhat a result of acceleration gone wrong. Because of human mistakes, intelligent machines wiped out humanity, sending it to the post-historic condition, where most of the animals have been replaced by the machines, and people (all speaking pretty good English, but nevermind that) live and survive in the ruins of technology. They animate those ruins, turning them into religious, magical objects. What used to be knowledge has been reduced to superstition. What used to be technology is now merged with nature.

After serving their purpose machines become violent to new humans, considering them a threat to nature. Now, nature is blooming — the plants and trees are beautiful, although there are not many types of animals left in this world. Those were reduced solely to their function in relation to humans and replaced by the machines. And the only animals left are there to be hunted and used for food.

To quote Nancy again, “It is not a question of ‘nature.’ ‘Nature,’ as it is most often understood, is an abstraction, as is the idea of man standing before it. What is real is the earth, the sea, the sky, the sand, one’s feet on the ground, and one’s breath, the smell of grass and of coal, the crackling of electricity, the swarming of pixels…”

So what is real within the world of HZD and how one can relate to it? There are sky and mountains, rivers, forests and plants with little interaction with the player. There are plants and animals that are treated as resources, marked by artificial glowing of the game’s interface – the interaction with them is still limited. There are animal-machines, that became essential to the ecosystem – you can either kill them or tame them. There are ruins of tech hubs grown into mountains.

In this renewed state, with what used to be natural and artificial so tightly entangled, is there some other possible way to communicate with this in-game medianature? 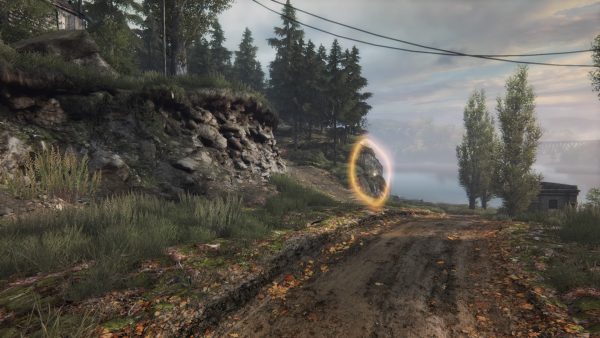 Landscape in The Vanishing of Ethan Carter: landscape as interface

I can’t go too far in the water in The Vanishing of Ethan Carter. It doesn’t kill me, but it doesn’t let me go farther than ankle deep either. The whole landscape of the game, which is incredibly detailed and tempting, works as the interface. I don’t have any artificial tools to communicate with the game-world: weird distortions in the air, which once I gather enough clues become windows to narrative scenes playing out as if on another plane, and floating words attached to objects, are perceived as the logical extension of the game’s natural scenes.

In this seemingly natural setting filled with sounds, of water, wind, insects, I can also hear my steps. I can’t see my legs though (and there is a reason for it), and despite having a name and identity my character’s agency is reduced to the gaze, and that is how I operate within the landscape of the game. Infinity of the landscape meets the finitude of the subject. 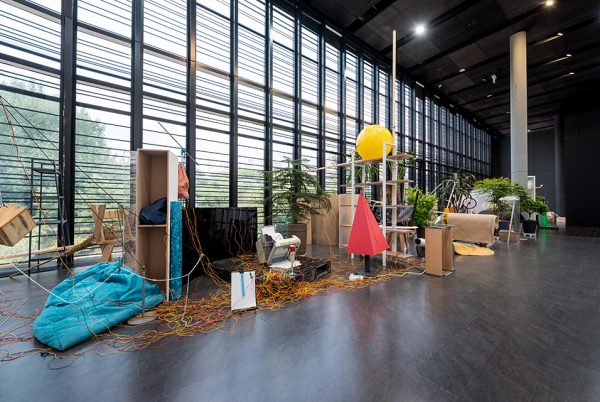 Forest of Sensors, is the work of Chinese artist Yang Jian, exhibited this summer at Nam June Paik Art Center in Seoul. The work consists of various household objects and plants, recreating the landscape of everyday life. Sensors are attached to each object, and visitors are invited to go through this terrain unnoticed, escaping the gaze of the objects – what we see looks back at us.

Occupied by this idea of landscape working as the interface, I’m trying some techniques to manage my time, I use some apps to help me concentrate. One of them is some kind of a flow timer — while I’m working on timer, a tiny tree is planted. The more I concentrate on the work, the more trees are planted, the more points I earn. If I earn enough, I can spend them to have a real tree planted somewhere. So I’m watching, how through the interface of this app my work is converted into the landscape.