OFF THE GRID: RONIN

Ronin is the term for a samurai who lacks a master and who travels the land looking for any type of work. Once feared for their tendency to pursue a career of evil, they are now viewed more favorably, possibly  because of society’s love for romanticizing history. However,  the heroine of Ronin is not subject to that treatment, being more in line with a traditional ronin, even if the game never refers to her as such. They could have called this game Revenge and it would make as much sense. Yet they chose to call it Ronin, which in turn tells us a great deal about our protagonist. It shows the detail that went into the game. But while the subtle details are implemented well, it still has a problem with the bigger picture.

On the surface, the story of Ronin is a bare bones tale of revenge that casually hints at some hidden depths. Our nameless protagonist lays out her relationship with these five gang members and why she’s taking them down, but that’s it. Events are left intentionally vague, but unlike, say, Titan Souls, it gives me something to work with at least. It neither condemns nor condones the murder of each gang member, allowing the player to decide how they feel about it. I could attempt to figure this whole story out, yet I feel like I’d be mocked for trying to do so. Little hints in the credits and the community’s initial sarcastic attitudes gave me this feeling that this was meant to be a parody of so-called “arty” games; therefore, trying to dissect it seems to be missing the point.  The hint system, which appears to be designed to be as unhelpful as possible, seems to be trying to let you in on a joke that the story isn’t privy to. So we’re stuck in a Martian Successor Nadesico situation where the parody seems to be doing everything it’s mocking. I’d love to try to figure the whole story out, but I just can’t shake the feeling that someone is yanking my chain. 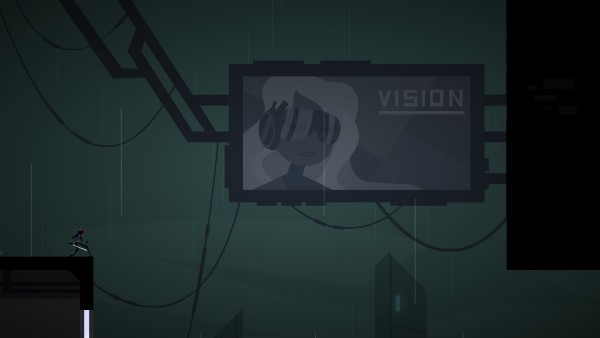 The gameplay is clear in its intentions yet still falls short in explaining itself. The jumping is lifted from Gunpoint, as in using the mouse or right stick to aim your jump and its arc. The combat is turn-based and begins the moment you are spotted by a guard. Once in battle you jump around, cut people up, and dodge bullets. The basics are fairly simple and are explained clearly; however, the player is left to figure out the finer mechanics on their own. It’s not too bad, as many concepts can be sorted out through observation, but this problem comes to a head in two instances. First is how enemies detect you: it’s never quite clear what alerts them. Sometimes I can kill a guard right next to his buddy and he’ll be none the wiser until he has a sword in him, but other times I get detected for daring to step between them. The second instance is in the final mission, in which, instead of dying to bullets, you get saddled with a timer that kills you after nine seconds and that is reset each time you kill. It’s never explained, nor is the fact that after you kill the final boss the timer goes into overdrive. These minor issues of vagueness aside, the gameplay is still fluid and engaging.

The levels offer multiple paths to take, and despite the hint system’s  insistence that it isn’t a stealth game, silent elimination keeps battles manageable. Once you get how Ronin flows you’ll be jumping and slashing to your heart’s content. The various upgrades you acquire add another layer of strategy to the gameplay, as well as even more freedom in how to approach a situation. The steep learning curve and trial and error gameplay can be a bit of a turn-off, but the feeling of satisfaction from clearing a particularly difficult room is immense.

While the flexible levels provide room for exploration, the mission and objective design  could use some work. The levels themselves are excellent and fit the dark, noir aesthetic. The levels feel big and imposing, emphasizing just how small you are and how titanic your struggles are. However, every section is rather samey: two levels of finding the computers and then a last mission of killing the target. It’s short enough that it doesn’t quite begin to drag, but had it gone on any longer the game would become a chore. 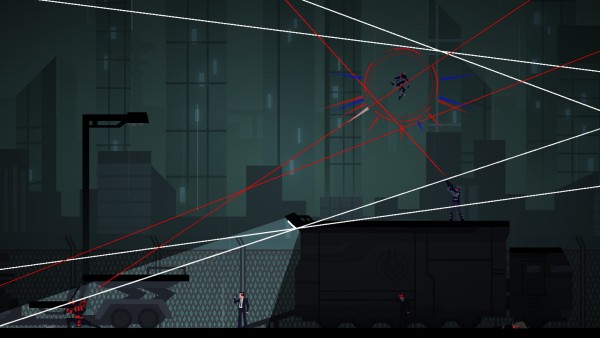 The optional missions to earn skill points fare no better. The mandate not to set off any alarms becomes frustrating rather quickly when combined with the other mission objectives necessary to get the skill point. If a civilian sees you due to the poorly-defined detection mechanic he will set off the alarm, but you can’t kill him because sparing civilians is another optional mission, and they all have to be done in one go to get the skill point. These poor mechanics are also evident in some technical issues, such as the occasional clipping through walls, which, though not prominent, impede the flow and technical prowess the game seems to ask for.

As it stands now, I enjoy this game; the turn-based combat is entertaining, and the story has the possibility for depth that intrigues me even if I can’t get a feel for its intentions. With the creator’s joking within the hints and credits, such as calling out to all his haters, there is a sense of an ill-defined parody hiding in here. It is a rather well-written game with some interesting gray areas, yet the idea that it could be satire keeps me from fully investing in it. Even if it is ultimately revealed that it’s a spoof then it’s rather poorly handled one.  I’d love to have a sequel to the game with more mission variety, a clearer sense of tone, and fixes for the minor problems.

Tags: Gunpoint, Martian Successor Nadesico, Ronin
← Games are the Most Personal Thing
Due Diligence: Escaping the Den of Madness →