Off the Grid: Let’s Not Stay Friends

Allison Winters is glad she left the dating scene.

Let’s not Stay Friends is the perfect example of how to make a competent romantic visual novel. Calling it great would be insincere and imply that it tried something interesting or risky. I don’t hate this game but ask me about it two weeks from now and I’d probably give you a confused look. If you plan on becoming intimate with this game: don’t, seriously, how would that work?

We follow the misadventures of Inske and her attempts to pass a test in magic school with the help of one of three handsome men. You can choose from the childhood friend,the playboy, or the nerd. They all have names but I’ve already forgotten them and these archetypes are just about all there is to know about them They all play out the exact character arc that you’d expect: the playboy who wants true love, the childhood friend wanting to be more, and the nerd who wants to be brave. It’s nothing exciting per se, but it each route is well told and once I was in a route I was drawn to finish it for more than professional obligations.

The story has a loose fantasy setting that anyone vaguely familiar with Tolkien or Rowling will pick up on easily. There’s a magical school and various made up monsters that are weirdly adorable. It has an Ed Wood-like cheesy charm to it that makes it bearable in a way that probably wasn’t intended. Put it under scrutiny, however, and we’re left with an incredibly lackluster plot It’s like a warm blanket that provides comfort but offers nothing in return and turns cold after a while. 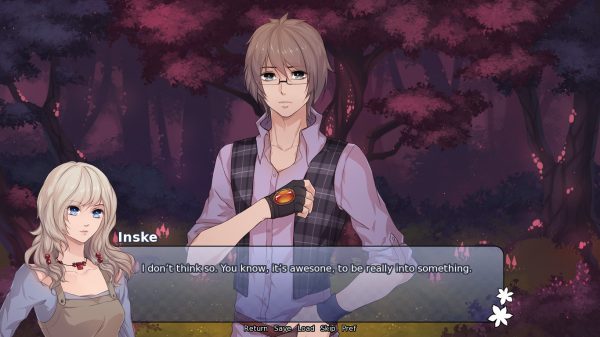 Like most visual novels we are treated to a cavalcade of clicking to advance and periodic choices to make. Navigating through each route does require you to pick up on each boy’s eccentricities and this is where a small semblance of challenge arises. I had fun trying to learn how each boy worked for the better endings. Though I ferreted out of the most endings and extra content in one sitting. This is not necessarily a bad thing, but given more time these characters could be fleshed out beyond basic hot guy stereotypes

If Let’s Not Stay Friends has a real misstep, then it’s the presentation, more specifically its poor English translation. The translators’ first language was clearly not English, and everything is translated literally, leading to a few gems of faulty English. I’m not going to sit here and take cheap shots because I like to think I’m above that, and once you get used to it your mind sort of corrects the glaring typos and awful syntax. Anyway, English is a ridiculous language in general, and I pity those who have to learn it. Despite the shaky translation I did find some charming bits of dialogue here and there that I genuinely laughed at.

Let’s not Stay Friends may not set my soul ablaze like Highway Blossoms did but I had an okay time with it. As I stated before it’ll probably be forgotten soon after it’s played. I do see potential in it as a game to get together with friends have a few drinks and poke fun at. However I may have a warped idea of what fun is, so, best just to ignore me.  If nothing else, just go play Ladykiller in a Bind again.