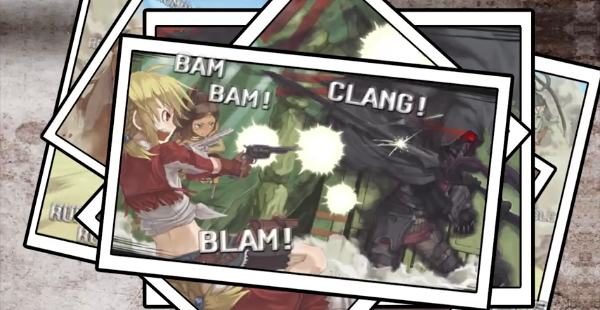 Off the Grid: Dead End Junction

Allison Winters has mastered the art of clicking a button.

Dead End Junction is a Western but to call it that is a bit oversimplified. There are definitely gun duels, outlaws and cattle ranching, however the game seeks to mix in elements from sci-fi and the supernatural to deliver an interesting experience. This proves to be a double edged sword as while the story and its dusty-textured art leave a positive impact, the characters feel lacking and the bugs that plague the game leave a negative impact. As with every visual novel that ambles through this town, there will be mild spoilers abound.

Dead End Junction tells the tale of Josette, Jo for short, as she attempts to leave the sleepy little town of Cow Stone Bell and consequently gets caught up in the requisite “save the world” plot. It starts out as something like a genre film—albeit in Kinetic novel form—and slowly morphs into a genre mash-up with elements of sci-fi, the supernatural, and a small bit of fantasy for taste. Jo’s role as the small town girl with daddy issues makes her an excellent audience surrogate as we experience her wide eyed wonder at this new world, allowing the plot to unfold naturally around her yet keeping us grounded in a story that is constantly redefining its setting.

Just when we start to think that this is a standard dime store Western we meet the Black Knight. The Black Knight, generic name aside, comes crashing in and with him comes a sense that this world is not as it seems. Up to this point in the story we’ve had mostly musings about life against a standard Western backdrop, then this guy waltzes in wearing metal armor, and he’s got the ability to conjure storms. Everything about him raises new questions about who he is and what exactly our setting is. He drives the plot from the background with his wide array of unearthly abilities that still feel believable due to his early introduction in the story. As a result new elements pop up without feeling shoe horned in and keeps the world feeling grounded and consistent even when the dead can rise again and Elves act as a conductor for a magical ghost train.

The story told within this game is fairly engaging but has a bit of a problem with pacing. The story is split into four episodes, three of which I’ve read. The first chapter, A Good Day to Travel, does well to establish the world with the aforementioned Black Knight. It’s here we are introduced to Inaho and her people the Furro, a race of beastmen that are basically a stand-in for Native Americans as understood by popular culture. They have a connection to the spirits of the land and losing said connection is a great source of distress for Inaho. As Jo struggles with adjusting to the world itself, Inaho is concerned with the well being of said world. As both girls come to understand each other more on this leg of the journey we come to understand this world and its problems more clearly. At this point the plot is driven by meeting the president and what exactly the black Knight is. It’s a shame that the next chapter stretches these points out to painful lengths.

Deadman’s Bullet opens up on an exciting shoot out with zombies but then takes us back to how we got here.This is the point in the story where things start to drag for a time. The meeting with the president is delayed endlessly. First the guy is out of town so we’re forced to watch Jo mess around in town, then we get involved in an assassination plot against him that can apparently be foiled a few times by a trio of young people. The whole section is littered with navel gazing about the nature of war and Jo’s ideas of a hero being shattered, ideas that will be better explored in the next chapter. Here it’s just filler till we can get to the more exciting bits again. The best element to come out of this is a new side villain, Mad Dog Beth, who is far and away the best part of the chapter. After serving as a soldier in a war in the world’s distant past, Beth is left to wander around a land that no longer needs a soldier. She is searching for purpose and finds it in a life as an assassin. Searching for purpose is a theme that resonates with me more than I’d like to admit and as a result she does too. By the time we get to the third episode, she has fallen in with the Black Knight and has become an insane nihilist. A war veteran looking for the meaning of life when all she knows is causing death. She delves deeper and deeper into madness as the story progresses and the climactic duel between her and Jo in chapter three is a bittersweet end to the character.

Despite the game’s pretension of having a deeper meaning it never reaches the lofty goals it sets for itself. Using a fantastical race, in this case the Furro, to explore racism is nothing new. However it’s been explored better in other media and adds nothing to the overall plot. We’re just left with some ham-handed scenes. The story as it stands is fine on it own and the racism aspect feels forced in because hey we need to be about something I was more invested in the the twists and turns of the story as we explored this lonesome crowded west. Jo as a protagonist is enjoyable, she’s brash, goofy, and overall just a likable girl. I don’t relate to her as well as Amber from Highway Blossom, but her fun demeanor brings in a nice contrast to the more serious supporting cast. She works well as an audience surrogate since we’re meant to feel what she feels reading those cheesy dime store novels.

This is not to say that the rest of the cast is unlikable, just that sometimes they feel like stock Western characters. They do their best to be three-dimensional, but in the end they have a role to play and they do it well. For example, Jo’s father, Johat, is the tough Western hero who doesn’t handle emotions properly, preferring to stay in a background helper role for his time on screen.

I just don’t really see most of the characters rising above their role to become characters in their own right. In a world that hints at so much more they feel quaint by comparison. Again looking at Johat this is a guy who’s seen some crazy otherworldly events yet he comes of as nothing more than the cool outlaw type. If I have any point of contention with the cast it’s Bizkit, a little clergy boy from another world because guys who look like girls are hilarious, hahaha. He’s a cocky little git who really doesn’t earn his right to be that arrogant. It’s meant to be funny that he’s constantly mistaken for a girl but forgive me if I don’t find that amusing in the slightest. Does it come off as malicious or spiteful, not really. It’s just stagnant. 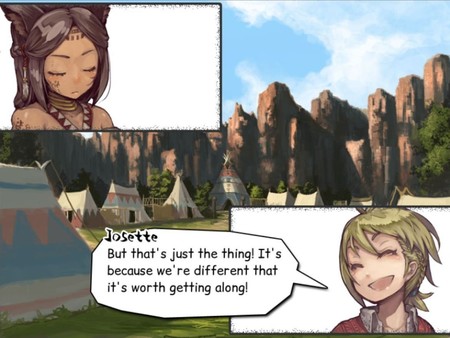 I’d be remiss to neglect talking about Inaho, Jo’s longest traveling companion. Intentionally or not, she works as an interesting metaphor for depression and anxiety. When we first meet Inaho, she is very cut off from not just loud mouthed Jo but most of her tribe. It’s never implied to be a requirement of her people but more self-imposed. She has a hard time relating and prefers to be the cold, aloof guide. As she travels with Jo, she’s plagued by “evil spirits” that tell her that everything is gloom and doom. Even as she comes to trust Jo, they tell her Jo will hurt her and that she should just give up. She eventually conquers these demons and manages to put them mostly at bay, though they still linger. I really don’t know how deliberate this was as I had to do some reading into to it get that much but as someone who knows those feelings, Inaho spoke to me on a more personal level.

I’ve been over here getting all story driven and what not, and I may have neglected to mention the actual mechanics of the game: they’re functional. When I’m playing a visual novel I’m not expecting much in term of mechanics. Can I advance the dialogue comfortably and see a backlog? Because I tend to click forward like a child on a sugar high. Dead End Junction succeeds, but past that is choppy waters. The game is riddled with bugs that come and go like ships in the night, from getting stuck on a certain scene with no explanation to backgrounds that don’t transition properly. Every time I was getting drawn into the game I was jerked out of the moment by a stupid bug, which in turn drew my attention to the weaker aspects of the story and characters. The developers are working to patch issues as they can – we’ll see.

The art direction is top-notch with an anime style that mixes in some lovely shaded designs that give the game its own feel. The characters look beautiful with a distinct look that conveys who they are, you take one look at a character like McBain and without any exposition you know that this is a tough outlaw. The backdrops give us a sense of where we are but feel bland compared to the sharp character design. The music complements the backgrounds in this respect, being overall kinda generic with some different interpretations of public domain tunes, such as “Home on the Range” and “The Saints Go Marching In” scattered about. They can be rather grating at times and some just don’t fit the scene at all.

Bile notwithstanding, I do enjoy Dead End Junction for its story and art which, as far as kinetic novels go, are fairly crucial elements. I’m excited to see where the story takes the characters and can’t wait to experience it with them. The mix of other genres adds an element of mystery to an already exciting if standard Western tale. Those who enjoy the Wild Arms series will find themselves right at home, along with catching some clever references along the way. 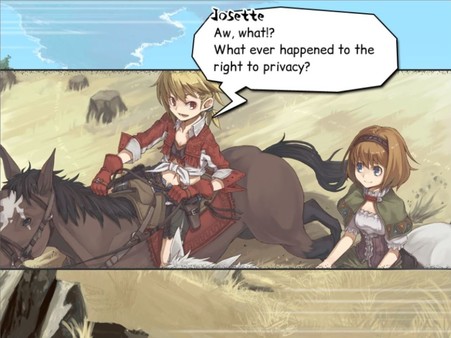