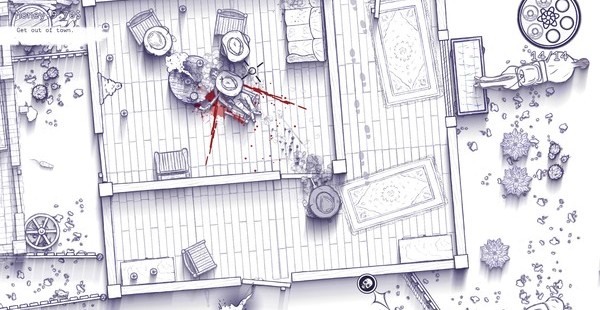 Allison Winters is lonesome in this crowded West.

An engaging story and themes can sometimes mask a game’s other flaws. I mean, Persona 3 is one of my all time favorite games, but it made some boneheaded design choices. However, I can overlook them due to an engaging story and the excellent use of its themes. That is not the case with 12 is better than 6. While it has some interesting mechanics, it quickly becomes a slog due to both a story and difficulty curve that are all over the place.

Since you may already be thinking it in your head, yes, this game resembles Hotline Miami in more ways than one. Both use that same overhead perspective with a dash of ultra violence while going through a series of boxy rooms. However, 12 is better than 6 diverges with a Wild West flavor and a heavier emphasis on gun mechanics and combat. You have to manually reload each bullet and cock each shot, and this tension ramps up the already intense firefights. There are melee weapons, but outside of a stubby knife they are few and far between. They aren’t that well implemented either, as the love clearly went into the gun and arrow mechanics. The melee weapons detection is rather vague and inconsistent; sometimes the knife kills in one hit, while other times it takes nine. This can lead to frustration as quite a few levels like to limit you to the knife or whatever other melee weapon is lying around.

Speaking of frustration, the difficulty curve is less a curve and more a series of jagged peaks and canyons. It will be an arduous uphill battle for a mission or two then go right into a set of areas where you just tiptoe through the tumbleweeds. It doesn’t help that while enemy AI clearly has a set of rules, sometimes they just decide to throw caution to the wind and come at you unpredictably, guns blazing. Sadly they are all better shots than me. The game is hardly unfair, it’s more jarring… and tiresome. 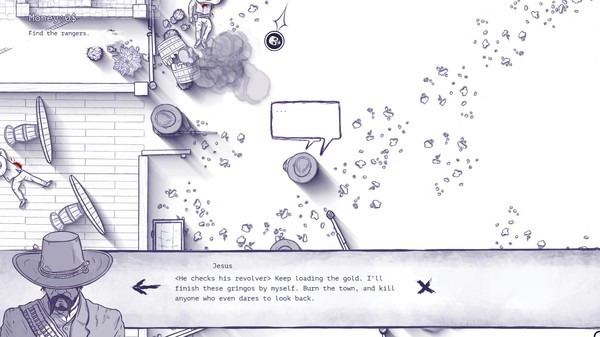 This is really the sticking point for me: the game gets monotonous quickly. If the story was halfway decent and not trying to be Hotline Miami with a Mexican gentleman named Jesus in lieu of a white guy, it might have been enough to salvage the game. It tries to be all mysterious about Jesus’ past, but for all the build-up this story gets the payoff seems weak. It doesn’t help that Jesus is a completely unlikable character. He murders indiscriminately, is borderline racist against the Chinese, and really shows no redeeming values. Jacket from Hotline Miami was committing horrible crimes, but he wasn’t so much sociopathic as confused and possibly scared. Jesus shoots people for looking at him wrong, so the big revelation the he led a gang is hardly surprising. I’m not interested in figuring out more about this man because he’s a horrid person, and not even fascinatingly horrid, just normal horrid. I don’t care about his backstory, or even what happens to him in the present to be honest, and as a result I have no reason to keep up with the mostly tedious barrage of gun fights.

The story also has problems with tone and direction, with each act of the game varying wildly. The first act sees Jesus on the run from the law, the second and third acts feature big revelations, and what I’ve played of act four is decidedly wacky in a way that is trying to be mature but just comes off as childish. This incongruity is jarring, and I can’t really get what the game is trying to say, or even if it’s trying to say anything at all. Maybe I’m just not that familiar with Westerns, my only experience being Gunman Clive and Wild Arms, but nothing meshes well, and the ongoing plotline with Jesus feels cobbled together.

12 is better than 6 is hardly a bad game; it’s just sort of there. The gun mechanics are excellent, especially the need to reload, and once in a while there is a cool section, but it’s mostly forgettable. I’ll admit the only thing that will probably stick with me is the soundtrack in that ear worm kind of way, but other than that it’s bland. If you’re looking for a touch of the old ultra violence, you’re better off playing Hotline Miami.