Where Allison Winters hopes no one knows her name.

Comedy is subjective. A joke about Jesus being a less than stellar guy may get great laughs at the Aethos convention, but will probably get you kicked out of the local church. Comedy is about knowing your audience and going from there. It’s also about knowing when jokes have become stale due to overuse. Weapon Shop de Omasse picked up on the first bit but missed the other important part.

Weapon Shop de Omasse is part of a collection of games for the 3DS in Japan called Guild 01 along with Liberation Maiden and Crimson Shroud, which were released overseas individually in late 2012. Omasse was not released until February 2014 due to  a perceived  lack of an audience and the massive amount of translation required. One could argue that the success of Recettear, another item shop type game, helped dissuade these concerns. All games in the collection were developed by Level 5 studios better known for the Professor Layton series, Dark Cloud Series, and Dragon Quest 8.

The story concerns a weapon shop in in your typical fantasy land threatened by evil, that rents out its equipment to a recurring cast of adventurers. One of the few interesting elements of this story is how it is told. Being a lowly weapons shop apprentice, you aren’t really the adventuring type. Instead, you follow events on Grindcast, the fantasy Twitter stream of your various clients. It gives you access to different perspectives and helps make the world feel more alive and large, even if the characters themselves are parodies of common archetypes such as the noble hero, the badass old lady, and so on. Despite the characters being fairly shallow, I was invested in a few of their stories and was genuinely rooting for them. 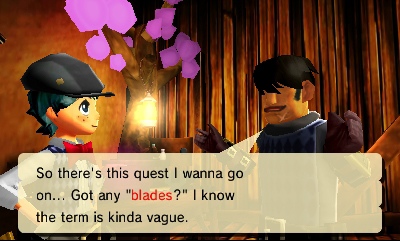 That said, this is still a comedy game with the dubious honor of being stiflingly unfunny. Its style is based on the Japanese form of comedy known as Manzai, which usually involves two people trading back and forth jokes based on comic misunderstandings and word play. Manzai consists of a straight man and a funny man. The straight man role is filled in this case by the protagonist, Yuhan, and his master, Oyaji, while the funny man role is filled by your rotating cast of regulars. Most of the customers tend to be off in their own little worlds and it falls to Yuhan or Oyaji to keep them in check.

People have been poking fun at the fantasy RPG genre for decades now with shows like The Slayers and games like Cthulu Saves the World. To really stand out anymore you need to give the old jokes a new spin or come up with some new material. Instead of doing that, the game decided to go for meta humor while throwing in anachronistic social media jokes. It got a few chuckles from me, but they were few and far between, generally caused by the sheer absurdity of the joke. Maybe this kind of humor would have been okay in the 90s, but for a game from 2012 it’s just sad. Like listening to your granddad tell that joke about how he likes his women for the 900th time.

The game’s second big problem is that it’s simply boring. The main gameplay draw is the weapon crafting system, that I’ll admit, has a fair bit of depth to it, but the main game never requires you to dive into it. Weapons are forged by playing a rhythm game with timed hits to catchy beats. Unfortunately, the game is vague on which areas you can and cannot strike, leading to frustration. The other section of gameplay is renting out weapons to NPCs and filling orders made by the regulars. The problem is that the game tends to either bombard you with customers or leaves you stuck watching Grindcast waiting for something interesting to happen. As somebody who works in retail, I don’t like my games to remind me of my day job – though this does have a better soundtrack. Omasse is really counting on you enjoying the forging system, but it’s just not that compelling. It doesn’t help that while the songs  are great, there are only about three or four of them, which you quickly grow tired of. 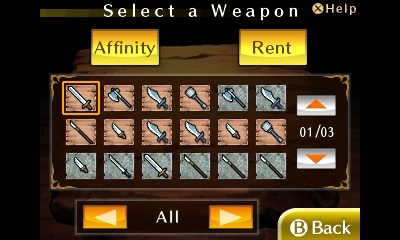 Repetition is a common theme throughout the game. Between the regular’s quests, random NPC’s stop by to rent weapons and then go on generic quests spouting the same dialogue as their brethren. Maybe I’m being nitpicky, but there are a lot of tiny flaws to cover here. The shop itself rises in levels, which seems useless considering the way you get access to higher level weapons is by the main characters completing their quests. Money is completely useless outside of buying crafting materials, but you bring enough of those in through quests anyway.

The game is also pitifully easy, provided you use your brain for about two seconds. Just make sure your weapons level and type match the renter and you’re good. On the final day, there is talk of an ultimate weapon that could defeat the Dark Lord. I ended up giving my customers a standard weapon I’d made for them previously and they trounced the Dark Lord regardless. All these little things combined with the games actual main problems just make the game tedious.

In the end, this is not a good game. It has some interesting concepts, but without compelling gameplay it becomes mind-numbing. I’ve managed to avoid making Recettear references so far, but I have to say at least that game was enjoyable and managed to be funny, something this game missed the mark on. Save your eight dollars and go buy something better like Mighty Switch Force, if you haven’t played that yet. Or maybe Tacos.