Off The Grid: Legend Of Dark Witch

Allison Winters still dreams of being a magical girl.

The Mega Man franchise is a well-loved series for good reason. Its masterful level design and easily-learned mechanics keep gamers coming back time and time again. Today’s title, Legend of Dark Witch, is one of many games that has been influenced by the Mega Man franchise. While influence is expected in artistic mediums, and is not a bad thing in and of itself, it is also important for a piece to stand on its own merit.

From a gameplay perspective, there is nothing wrong with Legend of Dark Witch. The combination of  Mega Man-style run and gun gameplay with a Gradius-style upgrade system works very well. Running down corridors blasting your way through enemies is as fun as ever, even if some of the enemies tend to sucker punch you. There is also plenty to do: you can find hidden treasure, unlock achievements, and set record times. The difficulty curve is pretty high and, as in Mega Man, knowing an enemy’s weakness will benefit you in the long run. The game, however, is never unfair and most deaths are your own fault. 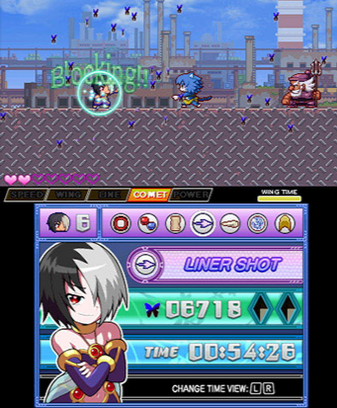 The only real annoyance is that most of the upgrades you earn throughout the levels, such as speed and powered up bullets, are lost upon death. While some permanent upgrades offset these losses, it never stops being frustrating. The upgrade meter is filled up by little butterfly-like creatures called Tres, which, in turn, fuel the weapons you gain by defeating bosses. The inclusion of Tres adds a level of strategy to the game, but you’re usually better off saving it for boss battles where it’s not only less abundant but best used to fuel your weapons.

As excellent as the gameplay is, the rest of the game pales in comparison; the level design, character design, and story all leave something to be desired. While the levels flow very well and teach the player through their design, they lack anything memorable to set them apart from one another. The levels themselves are stock video game locales that you’ve seen a hundred times. There is nothing wrong with that per se, it felt stale and left me wanting more.

In terms of character design, everyone in this game is either a young girl or designed to look like one. This isn’t an overt problem in and of itself, but these childish representations in conjunction with the characters’ one-note personalities – including that of  the “Big Bad” of the game who takes her defeat as well as a two year old whose ball has just been stolen – render the depiction petty and childish. 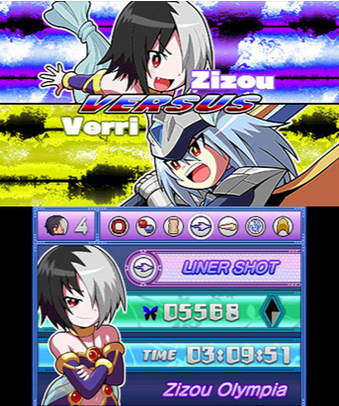 The story also leaves something to be desired but this has less to do with the story’s plot and more to do with how its presentation. The story concerns the titular dark witch, Zizou Olympia, and her quest to find the magical Plot Device. The game establishes why Zizou thinks the various girls you fight would know about the items she’s looking for and where they’re located, but no information is actually exchanged as a result of pre-fight banter or post-fight victory; you just go back to stage select to pick another girl to battle. When plot bombs do get dropped, there is no lead in and they have no impact. It’s hard to be invested in a story that developers have not mutually invested in crafting.

Despite my nitpicking, from a more aesthetic standpoint, I adored this game. The level design, while lacking interesting visuals, and gameplay are top notch too. While effort and love were clearly poured into the game, it has a hard time establishing an identity of it’s own. While its individual parts may be lacking in certain respects, the sum of those parts still create a worthy whole, and definitely make Legend of Dark Witch worth picking up.