Off the Grid: The Keep

Every little thing Allison Winters does is magic.

Memory Lane is a path well-worn by both games and players.  While my own trips down memory lane typically lead me to revisit platformers or Japanese style role-playing games, today is different. Today, I’m traveling back to a genre that, although nostalgic for some, I have no attachments to: the first person dungeon crawler. Games of this type have interested me before, but a perceived lack of being  user-friendly has kept me away. Then came The Keep, a throwback to the genre that seemed like it would be easy enough to get into and learn.

The touch screen controls for combat make the game user-friendly and accessible. Regrettably, the combat itself leaves much to be desired. While in RPGs combat and stats mean something, the lackluster character growth in The Keep makes the stats and combat feel superfluous. Increasing them didn’t seem to do anything. I diligently leveled up my skills, yet my melee attacks mostly either missed or were blocked. Damage doesn’t seem to be linked to any one stat either, as the weapons have a preset table for how much damage they can do. Even with the best weapons in the game, I did more damage to the air than the actual enemy.

In addition to superfluous stats, melee combat is dependent on a stamina meter that drains with every hit. In my own playing style, I reserve melee combat as the last resort option, so the limitation on stamina only soured the game further, for me. The game’s combat system would be passable if the the game seemed less interested in tying your hands behind with encumbering features than in letting you have fun.

With shoddy and unreliable melee combat, we’re left with the magic system. Unfortunately, that fares no better. Magic in the game is cast from the various runes you find hiding throughout the levels. While there is a nice layer of strategy involved in placing the runes in specific ways for spells to be cast, the combinations of spells required is so specific that using magic becomes tedious. The game has the requisite magic meter, but adds in a rune cooldown time which is frustrating given none of the spells were overpowered enough to necessitate  two forms of limitation to offset them.

Even the enjoyment I got from the game exposed some of its limitations. The game occasionally has large open areas  that encourage the player to find their own means of conquering them. Most of my plans went out the window within five seconds, but I found running around dodging enemies and trying to regroup to be weirdly fun. Unfortunately, the enemies are a tad overpowered and gang up on the player leading to countless deaths. 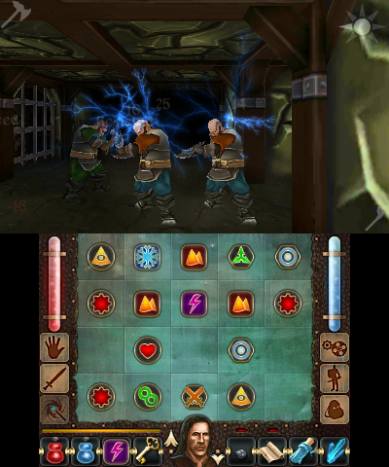 Ludic concerns aside, the story also has problems. The story is a generic fantasy tale straight out of a bad metal band’s Dungeons and Dragons session. Worse still, it seems they blew their budget on trite British narration leaving the rest of the speaking roles to be voiced by men from the local community theatre troupe. What should sound like terse confrontations sounds more like a group of third graders trying to act tough.

Not only was the voice acting poor, but it also broke any sense of immersion the game was trying to build. This is a shame because, otherwise, the game builds atmosphere fairly well. The music is soft, drawing attention to the sounds of the dungeon itself. I found myself lost in the drips of water and the distant clank of enemy armor, but then, someone would speak and shatter the whole illusion.

There are quite a few good ideas lurking in this game, but they are overshadowed by the poor execution. There is potential in The Keep for a great game, but it just falls flat on it’s face. These failings, coupled with a rather high price tag, make this one a definite pass.

Tags: The Keep
← Squad Size II
Enemy At The Gate →