Due Diligence: The Rat Race

There is a melancholic magic to Tom Clancy’s The Division. Gripped by a viral outbreak and urban chaos, its desolate Manhattan is breathtakingly evocative. The eeriness of walking through its deserted Times Square. The sense of impropriety one feels when rooting through a ransacked apartment. It conveys the horror of a viral outbreak on both a societal and individual level. Come for the power leveling, stay for the haunting, poignant experience.

Only kidding. It’s an online shooter full of color-coded loot and grind-heavy content. Because of course it is; it’s 2018.

The year is 20xx. Wanting to end capitalism, terrorists have infected NYC’s €co$ystem with deadly dollar bills. The virus has killed tens of thousands and led to a quarantine of Manhattan, but that’s about it. New Yorkers are still out buying things, only now they’re as likely to pull their Franklins out of a dead guy’s wallet as an ATM. “There’s blood on the bills, but money is always dirty,” seems to be the vibe, not that the game explores it. An explicit political take might risk lowering microtransaction revenues, and we wouldn’t want that. The death-money is throwaway precursor fare only. The Division has only one interest: that players jog forever along its interminable #shootshitgetloot treadmill.

In the months since the outbreak, all the city’s criminals have banded together into a pillaging brotherhood. More inexplicable still, municipal workers now own an endless supply of flamethrowers and, like the Puritans of yore, see fire as the only sensible course of action. Caught between these ragtag groups are regular citizens. Those who hadn’t the foresight to keep an AK-47 and some flashbangs under their bed for a rainy day. Idiots.

As an elite agent of The Division, Tom Clancy’s beige-clad personal army, the player must disperse Manhattan’s ne’er-do-wells. This means going somewhere, shooting people, and picking up a thing or flipping a switch. Hostage rescues are easy: kill the bad guys holding civilians, open a door. Supply drops have me defending boxes for 5 minutes until the enemies get bored and give up. Bounties are government-sanctioned bloodbaths where I kill dozens of people. Uplinks. Pfft. Run around a building turning machines on, sometimes without even firing a shot—in a shooter! 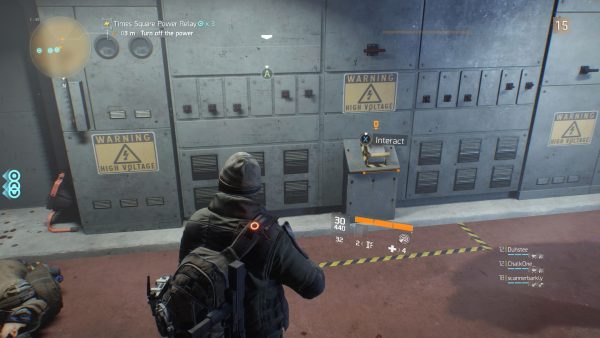 I’ve done these missions dozens of times, and as I hope is clear, they are all dull. The Division is a boring, boring game. As a product of the Ubisoft machine, one expects a certain level of Far Cry/Assassin’s Creed/Watch Dogs-isms be present. But those games at least add something unique to the content smorgasbord philosophy (pirate ships, hacking, white savior narratives). But this is just a clunky cover shooter. It is trite, a chore to play, and I don’t even get to fire a USP.

To wit, I have come to a striking—nay, earth-shattering—conclusion. Algorithms made The Division. No, it’s true: a robotic hive brain with access to the source code for all the Ubisoft games (even The Crew) made it. And I’m betting this all took place in a top secret research facility hidden under a betting shop in Ealing. It’s the only logical explanation for why it is so listless and devoid of human joy or warmth. This also might explain why the game’s solitary creative flourish is so ham-fisted.

The Division is a very straight game about Saving the World and Stopping the Bad Guys. But its self-seriousness occasionally cracks a little, especially where players mightn’t be paying their full attention. Across Manhattan, there are NPCs giving out filler sidequests. Dressed in army fatigues, they look like every other stiff upper lip in The Division. But they do say never judge an NPC by its outfit, especially before you listen to its cracking dialog for 3–7 missions. Each NPC has a single defining characteristic driving their entire personality. In the perfect confluence of poor writing and give a fuck delivery, every single one is best friend/spousal material.

There’s the vain bloke who wants to be an actor. You go on missions fixing security cameras (“I need them for my screen tests”) and sourcing costumes for him. BECAUSE THE GUY IS A VAIN ACTOR. One woman is always sarcastic for no discernible reason. “I hope you’re not too busy out there trying not to get shot, honey. I’d appreciate it if you could save the lives of these hostages. I’d go myself but I couldn’t give a shit, so can you? Thanks, sweetie xoxo. Oh, try not to die. Lolz!” One guy has the flu and sneezes a lot. That’s it: his whole character IS SNEEZING! Another lad has a dog and gets distracted by it. Sometimes he says weird things to you, but he’s only TALKING TO HIS DOG. “Don’t sniff that, I’m working…Oh, sorry, I was talking to the dog, not you!” HE WAS TALKING TO THE DOG!

Now this isn’t me being cool and/or edgy. I’m not ironically enjoying these crap characters, rolling my eyes harder than a cheese down an English country hill. They’re poorly drawn, yes, that is a statement of fact. But their artistic ineptitude contrasts so well against the rest of the game. The Division might be a design by committee wasteland of zero ambition, but these NPCs are crystalline beauty. They bask in the reflection of its blandness, becoming shiny pennies at the center of a rancid cat fur cake. If The Division were, say, a car crash of a video game, these NPCs would be the guy who lost a foot. They’re hobbled, but in far better shape than the people splatted across the highway. 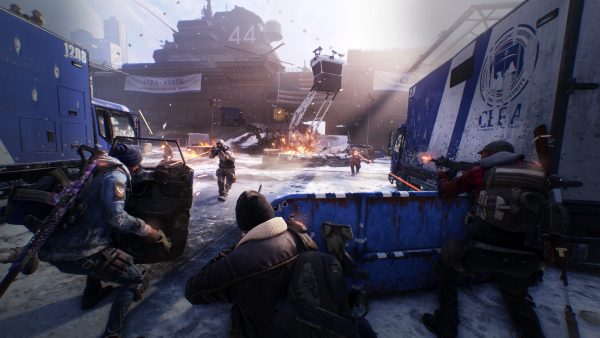 I’ve recently been getting into the teachings of David “Avocado” Wolfe. He’s the internet entrepreneur and food supplement shyster you’ve seen on Facebook. He’s an unquestionable bastard, but the dude and his $29.97 bottles of “Longevity Oil”, of which I bought a case of 24, have a point. “Every organism exists as a vehicle for the ennoblement of water into consciousness.” Think about that for a second. The Division is the water. Its NPCs a vehicle of ennoblement. And I, I am unfettered consciousness. I could look at that shoddy writing and pour bubbling hot scorn all over it, but what would it achieve? Is it not better to celebrate joy and good fortune, however small, wherever we find it?

The Division is a poor video game—that much is true. But buried within is something wonderful and human: abject failure. As I’ve learned walking David’s “Avocado Way” self-help plan ($19.99 / month, billed yearly), failure is something we should embrace, not fear. Without failure, we can never grow. With this in mind, I’m stoked for The Division 2 and the many, many areas it could improve upon the original. A reason to be happy if ever there was one—I pre-ordered my season pass this morning.