Due Diligence: It’s a Small World

Nope, sorry. I simply can’t help myself, alright? Much to even my own dismay, I’m going to harp on about open worlds some more. Apologies.

You might remember me mentioning that I used to play games a lot. If not, I’ll restate it: I used to play games a lot. That’s not the case anymore, for a number of reasons. Unlike back then, when I worked a number of transient positions, I now have a proper job, one with responsibilities, regular working hours, and a salary. I also have a flat, and that comes with a mortgage, home improvements, and decorating—all of which are undeniably, without a question, 100% more fun than playing games.

It feels like I spend a lot of my time making my house look nicer and be more functional. In reality I’ve only spent a fraction of my waking life doing such things, and maybe a similar amount of time worrying about them in troubled dreamscapes filled with floating shelves. What I do with myself the rest of the time I don’t know, so I blame my diminished free time on my house. This is all a bit unfair really, but it does mean that I appreciate a videogame that respects my time.

During a recent bout of painting and wallpapering I unearthed my long-forgotten Xbox 360 from under a pile of tools and brushes, and for a second I was carried back to a more carefree time when console games weren’t always 60 hours long. Eager to prolong this fleeting moment of nostalgia (once I’d completed my chores, of course), I set about playing through Beyond Good & Evil and Rage, two games I never quite found the time to sit down with.

Beyond Good & Evil is a terribly considerate game, to the point where it feels like it’s constantly asking me how I am and if I’m having a good time. Being British, this obviously sits very well with me. It’s an open world action-adventure affair, which mixes together the puzzly/platformy/collectathon nature of that first Jak and Daxter, Arkham-style combat years before Batman did it, and some simple yet rewarding (i.e., not frustrating) stealth. It’s also got racing, shooting, exploration, photography, and flying, all of which are in there for the sheer joy of variety. It stands as a stark reminder of those good old days when games were cheap enough to make that risks could be taken and genres could be bent any which way. Maybe I share some of the blame for the industry moving away from games like this; I only just played it last year. 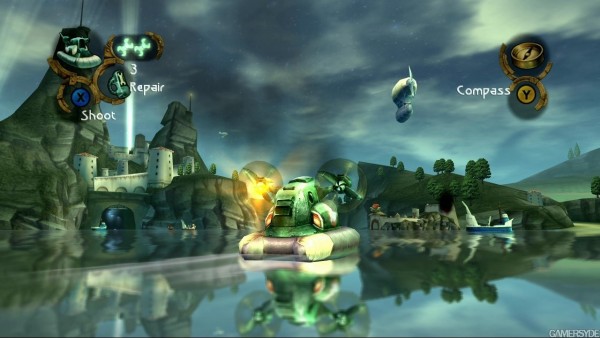 Beyond Good & Evil is all that it is whilst also being a fantastic example of a well implemented open world. It can be roughly divided into quarters, each of which holds a Legend of Zelda-style dungeon and a number of side excursions. Starting out small, the world of Hillys progressively expands as you beat its challenges, growing alongside your accomplishments. You traverse it in a hovercraft, which, like the map itself, begins very humbly and looks like an old Fiat 500 strapped to a rubber ring. Like the tiny car, it’s fairly ineffectual to begin with and can only take you short distances before running into an obstacle it can’t deal with. As you beat each of the game’s numerous challenges you’re awarded pearls to spend on hovercraft upgrades, and as its power grows it is the barriers themselves that become inconsequential. Laser fences that once hemmed your craft in are surmounted by jump thrusters. Hills, walls, and mountains become trivial once you can take to the skies. Your final mission is in space. A previously unthinkable location, it is easy to reach once the game deems you ready.

Even though Hillys expands constantly, it never becomes big in the conventional open world sense. It takes maybe 90 seconds to traverse from one side of it to the other, but its diminutive scope does nothing to lessen your sense of achievement in being able to reach its four corners. The opening up of the world gives you a tangible yardstick of your progress; once you could barely crawl across Hillys’ surface, but by the game’s end you’re leaving its very orbit.

Across the board, Beyond Good & Evil’s concision is where it shines. You’ll spend most of your time in its dungeons, where the game combines its diverse mechanics to create varied labyrinths, each room or corridor containing a different challenge. Completing a dungeon normally gives you almost enough pearls to progress the game’s narrative, and if you poke about a little, completing side puzzles and photographing each area’s fauna for additional pearl rewards, you’ll not run into trouble buying your next upgrade.

Outside the dungeons are other activities, like hovercraft races and assault courses, minigames of air hockey, combat arenas, and platforming stealth challenges. These are all lying around each section of Hillys, waiting for you to reach them so they can provide you with yet more pearls. As the world slowly unlocks you’re able to access more and more of them, so if there’s a particularly tricky pearl in a dungeon, you can forgo it in favor of grabbing another from a side activity. The game wants to keep you moving along through it, so it does all it can to make sure you do so. 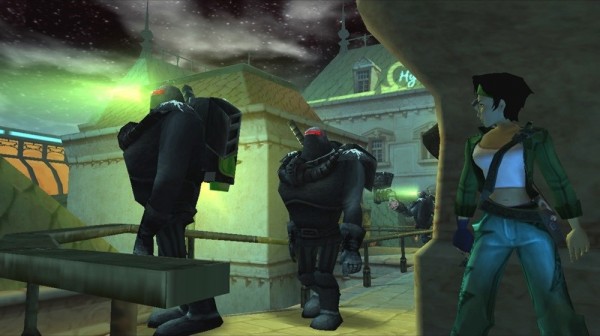 There’s a sense of forward progression in Beyond Good & Evil that’s hard to find in newer open world games. There is no grind involved in getting further into it, no “complete 11 more of these activities to incrementally boost your running speed;” there’s just a handful of everything. Four dungeons and four of each side activity is all you get. I know such a low number sounds a bit farfetched, but that’s really all there is. A lot of those are optional too, and outside the mandatory dungeons you only have to do a few of the side activities to secure safe passage to the game’s end. Beyond Good & Evil is striking in its restraint.

The game’s intent focus on providing constant progression achieves the goal of empowering the player in a way other open world games struggle to. It doesn’t contain elaborate skill trees to fill out to show you you’re achieving things. It doesn’t have an endless mountain of copy-pasted side activities to climb and make you feel like you’ve worked hard. It doesn’t have a world so vast you get lost in it before you inevitably “find your true power.” It just has a series of challenges that lead into one another, with enough player agency in between to give you a sense of self-determinism. There are only a few choices given to you as a player in Beyond Good & Evil, but the ones you’re able to make are meaningful in a way that the thousands of little ones we’re given in newer, larger open world games can never hope to match.

Beyond Good & Evil is everything Rage is not. Not that I’m saying Rage is one of those aforementioned “newer, larger open world games.” It’s just a really interesting mongrel of an open world game. Rage is a game about horrible mutants that is itself a horrible mutant. While Beyond Good & Evil manages to gracefully weave a dozen mechanics and genres together with barely a seam to show for it, Rage is a grotesque, decaying lump of flesh, staples, and viscera. It is the videogame embodiment of a transplant rejection. 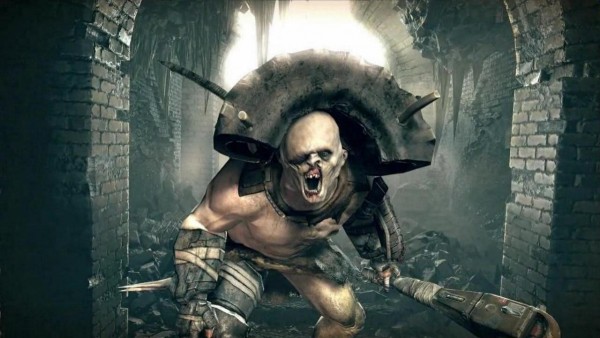 Just like Beyond Good & Evil seeks to combine popular concepts from the videogames of the early 2000s, Rage wants to do the same for the stuff released a decade later. It is a post-apocalyptic shooter that features questing, loot, and car combat. It is not Borderlands, Fallout, or Twisted Metal. It is also not Doom or Quake, despite being made by the studio behind both of those. It just kind of exists in a vacuum all of its own: a bizarre, lonely club of one.

Rage stumbles so wholly because it fails to unite its disparate components. Its questing consists of listening to one of the game’s seven named characters talk at you for a bit and then accepting their mission. These exchanges are as superficial as they come, and are essentially just you pressing a giant “CONTINUE THE GAME” button. You then jump in your car and drive down a road, maybe shooting a few bad men in cars as you go, until you reach your destination. You then get out of the car and go through a door that leads to a strictly linear shooter level, where you kill things while picking up assortments of junk. Once done, back out into the world you’ll go, driving to town to sell the junk, buy ammo and supplies, and then talk to a person for another mission. “Do it all again,” the game keeps saying; you will, of course, oblige. Rage would be a turgid shooter if that were all it was, but it would at least be over in about half the time. Instead, it wants to be an open world game. It just doesn’t understand how to be a good one.

Rage’s “Wasteland” probably takes about 90 seconds to traverse, just like Hillys. But while Beyond Good & Evil’s map is lush and open, save for the barriers you eventually overcome, the Wasteland is claustrophobic and uncomfortable. It comprises lots of canyons and narrow roads, each leading to a single place. It is less an open world and more a series of discrete locations connected by what may as well be tunnels. As if to obfuscate its tiny size, there is no way to get from one location to another; to travel anywhere you must drive to the center of the map and then take a fork in the road that leads to your destination. The world’s lack of interconnectedness means so much time is wasted driving up and down the same four or five roads, as the game asks you to go from A to B, back to A, then back to B to get to C, back to B to D, etc., etc. The driving is incessant, in case that wasn’t clear. 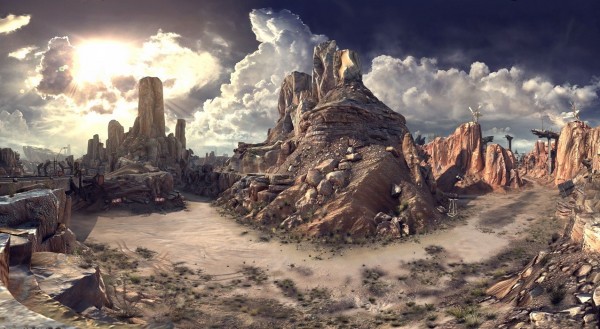 Rage doesn’t understand what an open world is, using it merely as a space to divide up the game’s bits. At their very worst open worlds are massive expanses of land filled with uncompelling stuff. Rage can’t even manage this paltry prerequisite: it is a tiny, empty means to an end that you’re forced to traipse across until you know and hate its every surface. Beyond Good & Evil shows us that an open world can be so much more than a simple space. It can become a metaphor for player progression, an embodiment of our achievements that grows as we do. We don’t need a series of menus, graphs, and diagrams to show us our accomplishments; we just need to be able to say, as so many promotional trailers tell us to, “See those mountains? I’ve been there.” But more importantly, Beyond Good & Evil also shows us that our goals don’t need to be 15 miles and 120 hours away for reaching them to hold meaning.

Leigh Harrison lives in London, makes DVDs for a living and owns a hamster. He likes canals and rivers a great deal, and spends a lot of his time walking. He occasionally says things about videogames on the Internet, and other things on The Twitter.