Due Diligence: Is This My Destiny?

Since I picked up Destiny 2 about a month ago, there’s been a curious change in my lifestyle. Whenever I’m beset by feelings of anxiety and personal doubt, I no longer feel those sinful temptations calling me. Instead, I turn to the equally joyless repetition of the sci-fi shooter’s gameplay loop. I love it: even though I play for at least 15 hours a day, my palms have never been softer—and I’ve saved a fortune on Kleenex!

Obviously, my carnal obsession with Destiny stems from it being a sweet loot acquisition sim. Like Diablo, Torchlight, and Borderlands before it, it’s essentially a maniacal chase after color-coded icons, harvested through the age-old technique of exploding a lot of juicy heads. Destiny, more so than any game I’ve played in living memory, knows how to make the work that constitutes playing a videogame painless. In the UK, for many years we had the concept of the 3 basic tenets of children’s education, or the 3 Rs: reading, writing, and arithmetic. Destiny has lifted the concept and come up with its own trifecta for success, where its insidious compulsion lies in the 3 Rs of rewards, restrictions, and repetition(s).

The rewards are obvious: loot—lovely, lovely loot! Every gun and piece of armor you use in Destiny has a ‘power’ number attached to it. All those numbers feed into your overall player power rating, and the bigger your power rating, the better you are as a person. I’ve seen level 130 players farting on babies in the street—low level scoundrels they are—turning to self-immolation for their crimes at the mere sight of a noble level 273 player. True story. You raise up your power rating by playing the game for many, many hours, and acquiring new, better gear with higher numbers. So it goes without saying, the bigger the number, the better, more dedicated the player. In this, Destiny’s reward structure is twofold: the micro reward of a shiny new gun or helmet popping from the corpse of an enemy, and the macro reward of you feeling superiority over those whose number is lower than your own.

Second: restrictions. Despite it appearing at first to be a solar system-hopping adventure for a million players, Destiny is a very restrictive experience. Each activity is quietly delineated from the last and spatially separated from other parts of each planet’s geography. Obvious examples are “Lost Sectors”, mini-dungeons literally cut off from the rest of the world by a single corridor, cave, or door which must be passed through on entry and exit. Many story missions are similarly set indoors, in single-use, linear environments you’ll see only once. (Although it’s worth saying that many of these locations are in fact portions of larger systems of rooms and corridors, restructured upon subsequent visits by the opening and closing of doors, to give the illusion you’re seeing something new. Restriction within restriction, if you will.) Even when activities do take place within the open world, the nature of their objectives injects restriction into otherwise sprawling spaces. Team-based “Public Events” are endlessly repeatable firefights that have you attacking or defending control points. They plonk themselves on the map at regular intervals, and have you shooting waves of enemies for about 5 minutes. They hint at a chaotic and unpredictable world, but play out in exactly the same way each time, essentially boiling down to you running around a small area until everyone is dead. 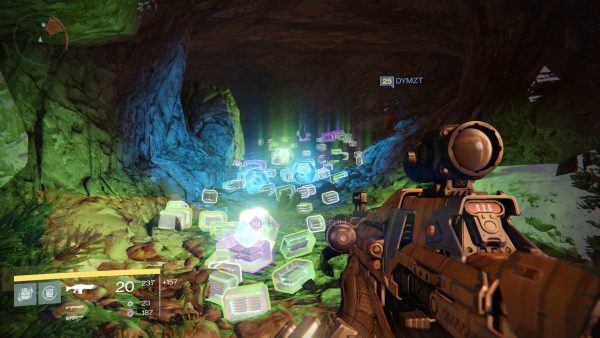 The game is never coy about it being solely about shooting things and collecting loot, and these spatial restrictions remove any friction that might prevent you from doing just that. Despite the odd aesthetic flourish pointing to openness and discovery, Destiny is a linear shooter. And while many similar games try and obfuscate this with huge vistas to the left or right of their corridors, Destiny instead makes shooting and collecting the only thing you’ll ever want to do, simply by paring everything back to running forwards (or in a circle) and shooting things. There’s no question of where you should go and what you should do: keep pointing your gun at the enemies and kill things. In removing all extraneous trappings, it is impossible not to get swept away by its uncluttered take on the shooter. It wants you to play it for hours at a time. And you probably will.

Which very neatly brings us to repetition. With its almost constant loot drops and simple, direct approach to building the purest of shooters, Destiny almost makes you forget that you’re doing the same thing thousands of times in a row. You enter an almost trance-like state, focused only on your power rating, the as-yet unpopped heads in front of you, and the next shiny thing that will jump out of them when your work is done. But it’s never really done.

Destiny works on a weekly cycle of activities and rewards. Once your power rating is up to about 265, there’s a finite amount of meaningful loot you can collect each week, unimaginatively called “powerful loot”. Powerful loot drops at or slightly above your current power level, and everything else becomes pointless, as it will frustratingly always drop below your by now impressively large number (go you!). This means that each week you’re working against the clock to repeatedly complete the cycle of activities that feed into meters which, once full, will give you a single piece of powerful loot. Complete 5 public events and you’ll get one. Participate in a half dozen multiplayer matches and you’ll get another. You. Get. The. Idea.

Destiny’s endgame for me has become a rigid schedule of meeting weekly Key Performance Indicators, just like the days when I sold TVs and laptops in a shopping center in Walthamstow—although I’m much better at collecting powerful loot than I ever was at flogging extended warranties for iPods. And this, I suppose, is really what Destiny is. It’s the shooter polished to a blinding sheen, wherein the shooting is only a means to an end, to more of that sweet loot.

And why do I even want a bigger number in the first place? Because it’s easy, guaranteed success. As long as I’m willing to give the game a few hours of my steadily eroding lifeforce a week, my power rating will keep growing. It’s a hollow, undeserved achievement, one that is utterly meaningless in the face of the little I’ve had to do to secure it. There’s a prize every time—just turn up and collect yours.

Destiny is pointless escapism that, like the tawdry pelvic polishing before it, might feel fantastic in the moment, but leaves you utterly broken the minute you step away and think about what you’ve done. I’m sorry I’ve let things get this bad. I promise I’ll try harder from now on.