Tranquility in the Wasteland: The Sobering Impact of Mad Max’s Photo Mode

James Frierson is looking to trade gasoline for camera film.

For me, and I mean this in the nicest way possible, Mad Max was not a thinking game. At least, not at first: what I wanted most from Avalanche Studios’ 2015 open-world action title was a pretty pastime with dopamine-inducing resource collecting and vehicular combat. Mad Max‘s solid gameplay loop of driving, bashing, punching, searching, gathering, and upgrading meant the violence easily lulled me into a flow state, but instead of stacking tetrominos I was attaching a monstrous bullbar to increase my car’s attack stat.

In his essay titled “Alone at the End of the World,” Yussef Cole pulls from a variety of games, mainly Hollow Knight, Metro: Exodus, and Dark Souls: Remastered, to discuss “deeply appealing apocalypses.” These are visions of the end-times packed full of potential energy, things to do, and places to explore. It’s a childlike glee, truthfully, “born of the same colonial sense of manifest destiny” that proposes that once we enter the “epilogue,” or the “footnotes at the end of civilization,” the world is suddenly once again for the taking. The apocalypse is where the bold and player-controlled reign supreme with icon-rich maps, sprawling quest logs, and banked ability points. Additionally, Cole writes that post-apocalyptic games can provide blissful solitude when all we want is to be “left alone” and escape into a different, albeit bleak, future where “it’s nice not to have to brace for war, or climate disaster, even if that means spending time in fiction where those disasters have already come and gone.” 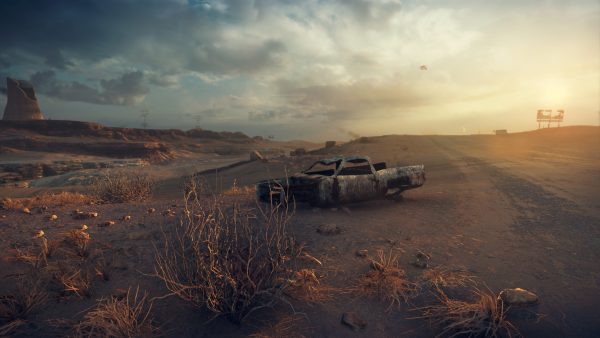 While careening over conveniently-placed ramps and reaching top speeds across stretches of fragmented asphalt, I sunk into a coziness with Mad Max that allowed me to seek outside entertainment alongside the game. I listened simultaneously to the screaming of razor-sharp blades on my tire rims and the song parodies of a jolly radio quiz show. It was easy to carry on a conversation while playing; I skewered a pesky sniper from his watchtower with a harpoon, then turned to my partner and asked if the avocados were ripe enough for dinner. It was nice to stop thinking and take in the sights like a stupefied tourist appreciating the perverse beauty of ruined Australia.

But after I mainlined the game’s story missions and installed Max’s coveted V8 engine, I began appreciating the game differently. Turned loose on the world with a souped up muscle car and oodles of time to kill, I started experimenting with Mad Max‘s excellent photo mode.

I began role-playing as a wasteland photographer with a bloody, complicated past, one who kept getting intercepted while en route to shoot locations by squads of Volkswagen Beetles rigged to explode. From the vantage point offered by a free-flying camera and a selection of filters, the apocalypse became a world full of subjects, negative space, and contrast. 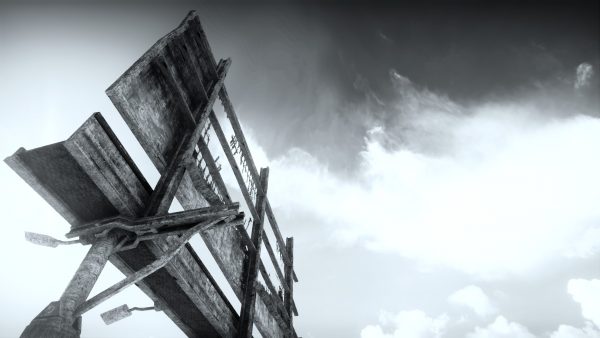 Mad Max‘s wasteland, with its prevailing isolation punctuated by the discovery of life or, more commonly, suggestions that life once existed, inspired a minimalist approach, one that zeroed-in on texture and form. Large basins of sand and withered shrubs interrupted by a derelict storefront, a naked tree, or the rusted husks of vehicles caught in a minefield; these striking images brought to mind the rustic American portraits of Robert Adams and Michael Kenna. Mad Max’s aesthetic is defined by its absence just as much as its substance, meaning its subjects occur solitarily or in vague proximity to one another without warmth or pathos. The subject is like an island, sometimes a group of islands, ignorant to the ongoing movement of a dead world; frozen in time at the moment of collapse.

However, my cataloging and its real-world analogues are not without issues. Viewing the wasteland as a smattering of set-pieces, my thoughts returned to Cole’s description of colonial fantasy. Every picture reflects an artist’s bias, so why do I choose, by and large, to omit people? Photography of a land destroyed, its history, context, and generations of inhabitants erased, felt akin to the pastoral paintings of the American West with its indigenous population conveniently absent or their images appropriated to elicit emotions of nostalgia or adventure. These depictions can promise a tale of discovery, positioning the focal point off-center and distant in such a way that invites the viewer to step inside and begin a journey in an undisturbed playground. This is how we found it, the picture may suggest, now go make it truly yours. 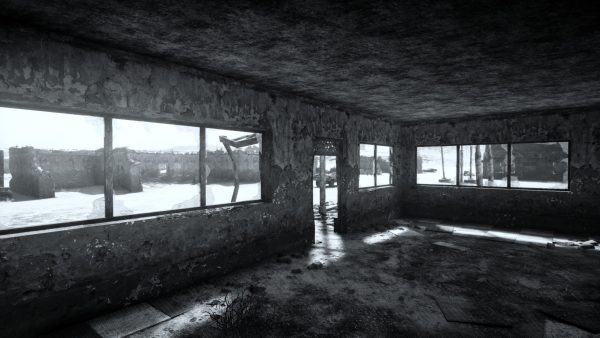 Max, and the player by extension, enters the world to reclaim and resettle while gobbling up every resource possible. Poring over sand-blasted ruins or framing corpses against the afternoon sun, it was easy to feel intrusive or even mercenary. In her own deep dive on this subject, Dia Lacina draws on Susan Sontag’s On Photography to discuss the “deliberate violence of photography” and how it relates to game spaces. Max’s presence in the wasteland, and my subsequent choices in how to frame it and acquire specific slices as my own art, is in part a circumstantial violation. Photography can turn people and things into “objects,” Sontag writes, ones that “can be symbolically possessed” and put to work for the viewer’s purpose. And if my purpose in this hellish space is not to respectfully and holistically capture its history and culture, then what is being accomplished other than a gallery of pretty pictures? Is abject strife being flipped into “ruin porn” for the enjoyment of the privileged and secure? Is the apocalypse being fetishized for its minimalism? This art of photography, though often separate from the game’s bare-knuckle brawls and exploding convoys, could nevertheless be seen as an act of violence.

Though even with this important criticism of photography and post-apocalyptic games in mind, Mad Max‘s photo mode revitalized an experience that had been growing tired. As much as I enjoyed side-checking pursuers and upgrading the porcupine spikes on my car’s chassis, it was the re-framing of the wasteland through a more considerate and creative lens that made this game special for me. I’ve never been much of a tinkerer when it comes to map-building or musical tools in games, but the increasingly popular photo mode allows me to personalize my experience and express myself. 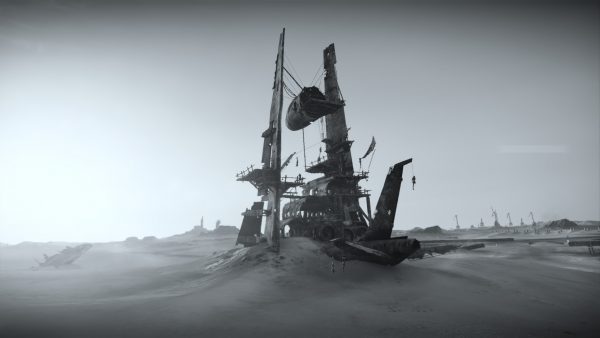 While mechanics like the interactive map and upgrade system have obvious purpose as far as game development goes, I began wondering at the inspiration and design ethos for the capture mode feature. What good is a camera, really, at the end of the world? A camera is not a tool for survival but one of pure voyeuristic pleasure. Why craft a camera with the same level of care as you would a jagged shiv or double-barreled shotgun?

But perhaps this idea of survival is too limited. With my water canteen, health meter, and gas tank filled to the brim, I could steadily climb a hierarchy of needs until the camera was employed as a means of achieving self-actualization. In the middle of all the violence, my photography could be a rebellious act of creation. I’m reminded of the World War I soldiers, POWs, and civilians who practiced “trench art”, assembling crafts out of battlefield debris and other junk, to combat the cruel tedium between conflict. Though I hesitate to psychoanalyze, this inventive hobby could reveal a desire to focus attention and energy on something that doesn’t exist solely between rifle iron sights. It’s a method of addition in face of excessive subtraction, a futile attempt to put more out into the world than is being taken away. Though undeniably appropriative at times, wasteland photography may come from a genuine place of preservation, hope, and expression. If I can’t put the planet back together, is it enough to enjoy what little there is left in the best way I can? 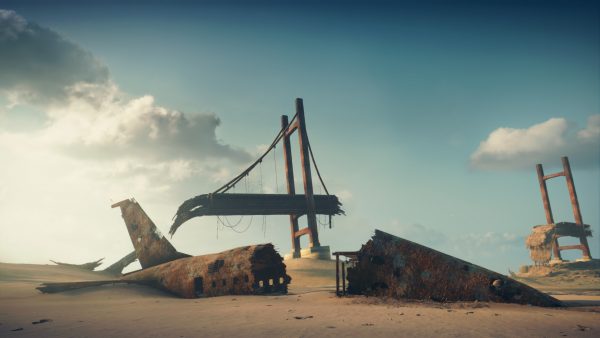 There isn’t a whole lot to hold onto in Mad Max aside from the odd cooperation among factions, such as a religious commune carved into the hull of a rusted ocean liner. This makes wasteland photography that much more valuable because “most subjects,” Sontag writes, just “by virtue of being photographed” are “touched with pathos.” “An ugly or grotesque subject,” such as a hollow fuselage half-buried in sand, “may be moving because it has been dignified by the attention of the photographer.” This makes all photographs “memento mori…[imbued] with another person’s (or thing’s) mortality, vulnerability, mutability.” If even the most hopeless images can be transformed into aesthetically interesting or evocative subjects, is that not a noble cause? Even if I’m the only one left to enjoy my art, does that make it less worthwhile?

It’s easy to forget the power photographs have over us, as they not only represent a sort of truth—though even that is complicated with the advent of altering technologies—but hold a moment, a culture, and a person in perpetuity. “They are a grammar and, even more importantly, an ethics of seeing,” writes Sontag, and the “most grandiose result of the photographic enterprise is to give us the sense that we can hold the whole world in our heads – as an anthology of images.” Long after most of us are gone and some great calamity comes to pass, photographs can serve as proof of existence. The wasteland in Mad Max is littered with these crumpled, creased, and battered “History Relics,” collectible photos found in footlockers next to scrap and ammo, depicting the delightfully mundane: a stray dog crossing the street, an infant dozing on its side in snow-white bedding, a tender slab of barbecued pork on a greasy cutting board. Max adds grave commentary to every image, once remarking “They thought they had all the time in the world.”

Every photo is an attempt to make something last, to pluck a single grain out of mountains of flowing sand. Heavy substance will always leak through the cracks as things are corrupted or completely erased. But the initial rush of the plunge, the warm silky earth lodging itself into our interdigital folds and making a home underneath our fingernails, remains a joyful resistance against a universe that will one day forget us.

James Frierson is an Austin-based writer passionate about games, coffee, and people. You can see more of his work on his blog or Twitter.