Joshua Trevett pretends to do nothing.

Did you hear about the big Overwatch update? It came out a little while ago, and it’s even better than a fresh balance pass or a new map or a character reveal. That’s right, you know the one I mean: the ability to sit down.

This arrived in the form of a new emote, with a variation available to every character in the game. They’re nicely differentiated, too! Portraying the physical way these characters relax gives the game new opportunities to reinforce their personalities. Tracer plunks down cross-legged and sways happily with a dumb grin, Ana gets down on a knee and carefully surveys the scene, and D.VA takes the opportunity for a quick gaming session. It’s always impressive how much charisma Blizzard are able to bake into these one-note cardboard caricatures, but that’s another point.

The best part is that unlike the other one-and-done animations, these sit emotes last indefinitely. When you decide to sit, you remain seated until you’re ready to move. Or somebody kills you. Or you get kicked for 30 seconds of idling (practically a synonym for sitting–what gives?). Maybe sit-down time fits awkwardly into such a fast-paced game, but still it expands the game’s reach into an easygoing dimension it had previously lacked.

I’ve always loved sitting down in videogames, going back to when I was a kid playing MMORPGs. Those are the games where it’s strange if you can’t sit. My high school friends and I would often hang out in Vana’diel, the world of Final Fantasy XI, and while I enjoyed a lot about being in the game – the setting, the characters, the music – I didn’t really care much for the game proper, the demands of a grindy RPG. My (wonderful, kind) parents must have paid two years’ worth of subscription fees to let me play it, but I never graduated even into the middling levels. Instead, I developed an idiosyncratic way of engaging with that world: I would make tiny profits by showing newbies the safest routes between the major cities, I would shoot the breeze with my guildmates, and I would sit. 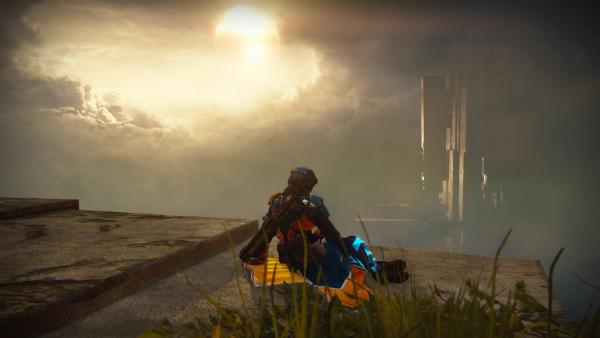 Sitting is a natural fit for the largest scale multiplayer games because of the nature of those environments. They’re filled with genuine life, real people roaming hither and yon in pursuit of their various purposes. Such a social space would feel uncanny if everybody were always standing and always busy with something; to take the time to sit, alone or with others, in the city or in the bush, is to relish the special power of the MMO. You not only get to enjoy watching the living scenery, you become scenery yourself, an ambient element that helps to sell the setting as a believable place.

Of course, that vicarious sense of location is an important part of many – possibly all – games, and any feature that helps reinforce it will be duly appreciated. Almost any game makes it possible for the player to simply stop participating in the action, but doing so frequently comes at the cost of making the presentation absurd. “Grab that M72 and take out the enemy tank,” Sergeant Whoever repeatedly hollers while our hero steps off to the side of the fight and takes in the background mountains.

So many games are all action, all the time, with quiet moments appearing only during cutscenes or other carefully-placed narrative beats, like elevators that disguise loading, or tension-building prep scenes. Those are tools of narrative pacing, distinct from features that allow the player to decide that any given moment is the time to relax. The former can be cinematic and compelling and there’s nothing wrong with that approach, but the latter is what really helps a digital location feel like a place where you can chill.

There are many ways to help players choose the mountains over the rocket launcher. Open-world games have an obvious advantage in this regard, since their natural state is without urgency. In shooters, it can be powerful to let the player lower the gun, overruling its constant dominance over the screenspace. Switching off the head-up display eliminates the on-screen reminders of the health and ammo the game is “supposed” to be about. In concert, those things make it possible for the player to transform a game into something new, a kind of interactive painting where the only task is to create and consider interesting frames. 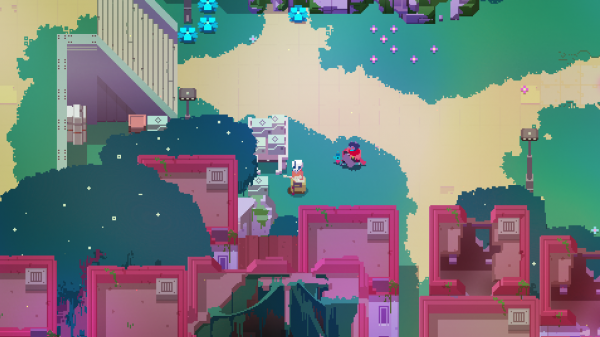 But of all the ways a game can encourage a player to slow down and explore a good image, sitting is the most powerful. That’s because unlike a first-person character acting as a camera, or a third-person character simply idling like they’re waiting for something to do, a sitting character ensures that the scenery will become a scene: the character is not just in the world, they’re comporting with it fully and naturally. The viewer has a surrogate, and is invited to speculate on what the character might be feeling. Are they enjoying a moment’s respite? Or are they in sorrowful repose? The world makes contact with the character the same way light hits a prism: it reveals a spectrum.

All that is why adding sitting to a fast-paced arena-style game like Overwatch can be surprisingly transformative. (It’s really good in Destiny, too.) Taking a seat in those small maps designed to promote a tight flow of combat instantly places them in a different context–to see Numbani from your butt is to see it with new eyes. Juxtaposition creates depth. Even just knowing that you have the option to sit down changes the feeling of the game, adding a transgressive and invisible extra dimension to the space.

Never underestimate the power of those moments when the invisible becomes visible. When the enemy turns the corner to see that you’ve become scenery, they’ll sometimes pause before blowing you away. And if you pick a particularly good spot, one time in a hundred you can watch them stop, walk over, and sit beside you, suddenly playing a completely different game. Done with purpose, taking a seat can be just as thrilling, just as urgent, as all the shooting.