Right from the start, Columbia aims to dazzle. Players stroll through its lush avenues, showered in exquisite summertime light. Towns soaring high above impose the impossible vertical scale, dizzying elevation implied by fluffy fields of clouds. And that music: soft religious chants subside for orchestral string arrangements with a hint of Dvorak when you take your first steps into its streets. With its outrageous assortment of coordinated flourishes, Columbia is its own New World Symphony.

But no wonder this lavish apparent utopia provides has any effect on the game’s protagonist. The wealth of sly details to observe, conversations to overhear and cute performances to watch are acknowledged by the player, who might occupy the same physical space as our protagonist, but not the same mindset. The cantankerous Booker DeWitt remains unmoved by the concerted efforts to intrigue and entrance. I guess he’s just not that into the Beach Boys.

I am not so presumptuous as to demand characters whose feelings are tethered to my own. But when a stunning new world such as this unfolds for the first time, not just before me but before my virtual representative, can’t I expect some synchronicity? Why do our reactions and intentions to this world so rarely align?

Of course, unlike me, Booker didn’t visit Columbia to marvel at its sights. He is a violent man. He’s committed atrocities he’d rather forget. Years of anguish, drink and gambling distance him from me. His past accommodates his indifferent response. In fact, it’s arguably designed to rationalize, even pathologize what has become the FPS protagonist’s range of interactions. 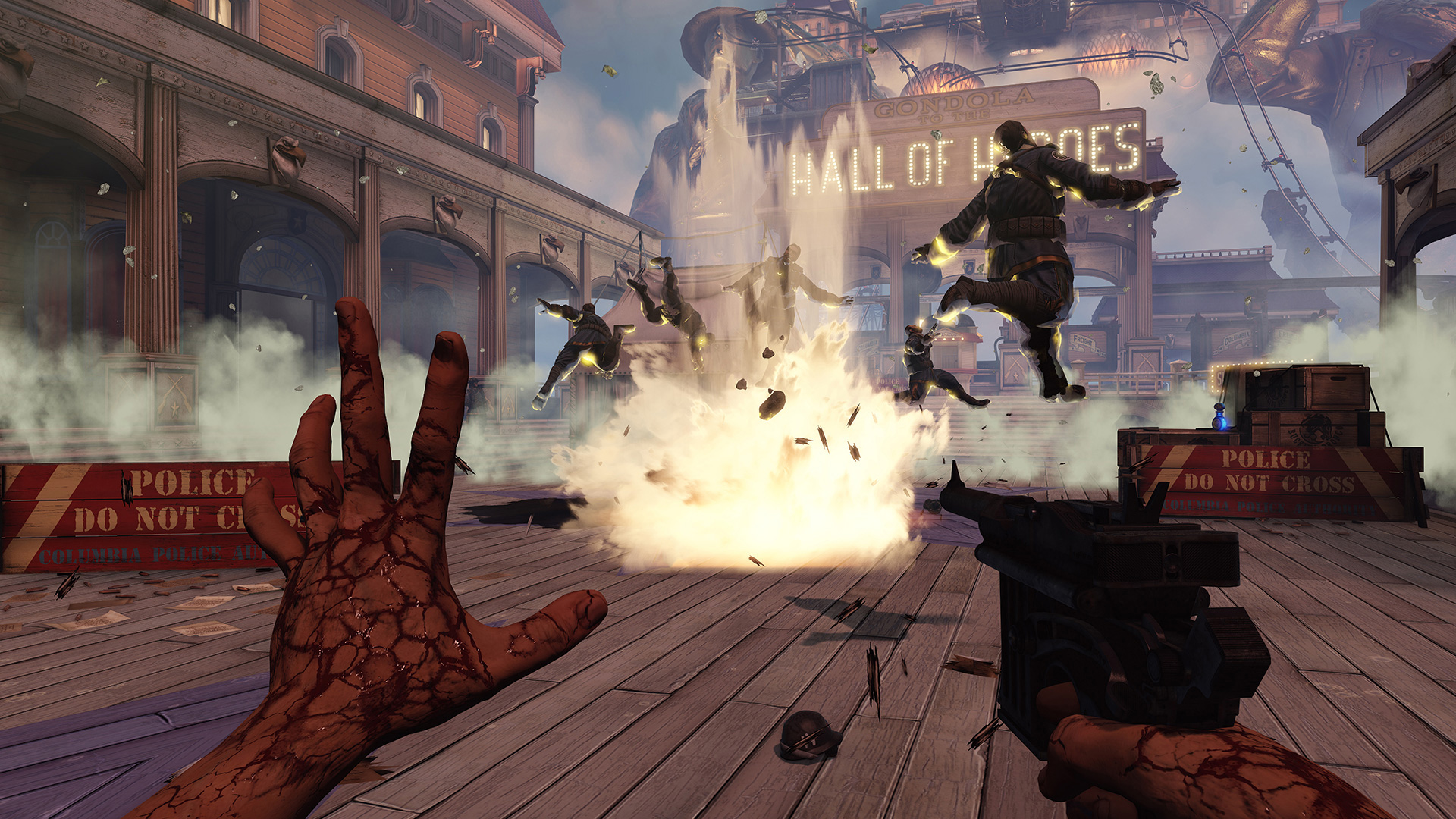 Except it doesn’t work like that. The invisible, deeply ridiculous confines of player agency can work when these are either given or deprived of context. In Bulletstorm, I don’t mind that my every action is violent in intent and execution. In this world, at this moment, violence, and nothing else, surrounds me. But while the world of Bioshock Infinite might be based on systemic violence and oppression, it presents itself with a peaceful veneer, one your companion through Columbia can access so effortlessly.

Elizabeth’s true superpower might not be the ability to reach and manipulate other worlds, but how firmly she is rooted in this one. Walls, to her, are a tangible reality to lean against, not a geometric barrier to be navigated. Pictures and posters are something to be playfully examined from various angles, not a texture to point your gun at for a while. Her inquisitive, naturalistic access to the physical world makes Columbia more of a real place, and exposes the pathetic limitations of Booker’s interactions from the second she hits Monument Beach.

By the time you’ve recovered from your daring escape, Elizabeth has run off exploring. The descending sun tinges the sky, the clouds, the beach and everything on it with a gorgeous rusty hue. Sunbathers recline languidly on Hey, you see a young girl? Shut up, Booker. You trudge through the sand. Pulled towards the source of the light, jaunty music, the end of a short wooden pier. There Elizabeth dances, carefree, to a lilting jig Miss? Miss. Miiiiiiss. Shut up, Booker. The music and the dance continue, as do Booker’s ignored protests. Press F to get Elizabeth’s attention? But why interrupt? Just wait a moment lo – fine, Booker’s dialogue is looping. Are we there yet? Are we there yet? Okay, okay.  I press F to extract her with a lie. No I don’t dance. Yes, let’s go to Paris.

Elizabeth runs ahead, keen to get to Paris. But wait, there’s still incidental dialogue to hear, further interactions to trigger. I watch her lift an exercise ball and skim stones along the waves. Booker snorts, tells her to stop. Then I hijack his legs and he runs to find more for her to play with. Perhaps I shouldn’t find this so fascinating. Only, isn’t testing the physical capacity of your surroundings a fundamental function of play? But I can only access this mode of interaction vicariously, crudely. I can’t hand her a toy directly like I would a child. Things pass from her to me, rarely me to her. I drag her by that invisible leash and wait to see what she sniffs at. I’m limited, lacking the tools to share my enthusiasm or invoke it in others but I keep trying anyway. Twenty minutes later, we finally leave the beach. 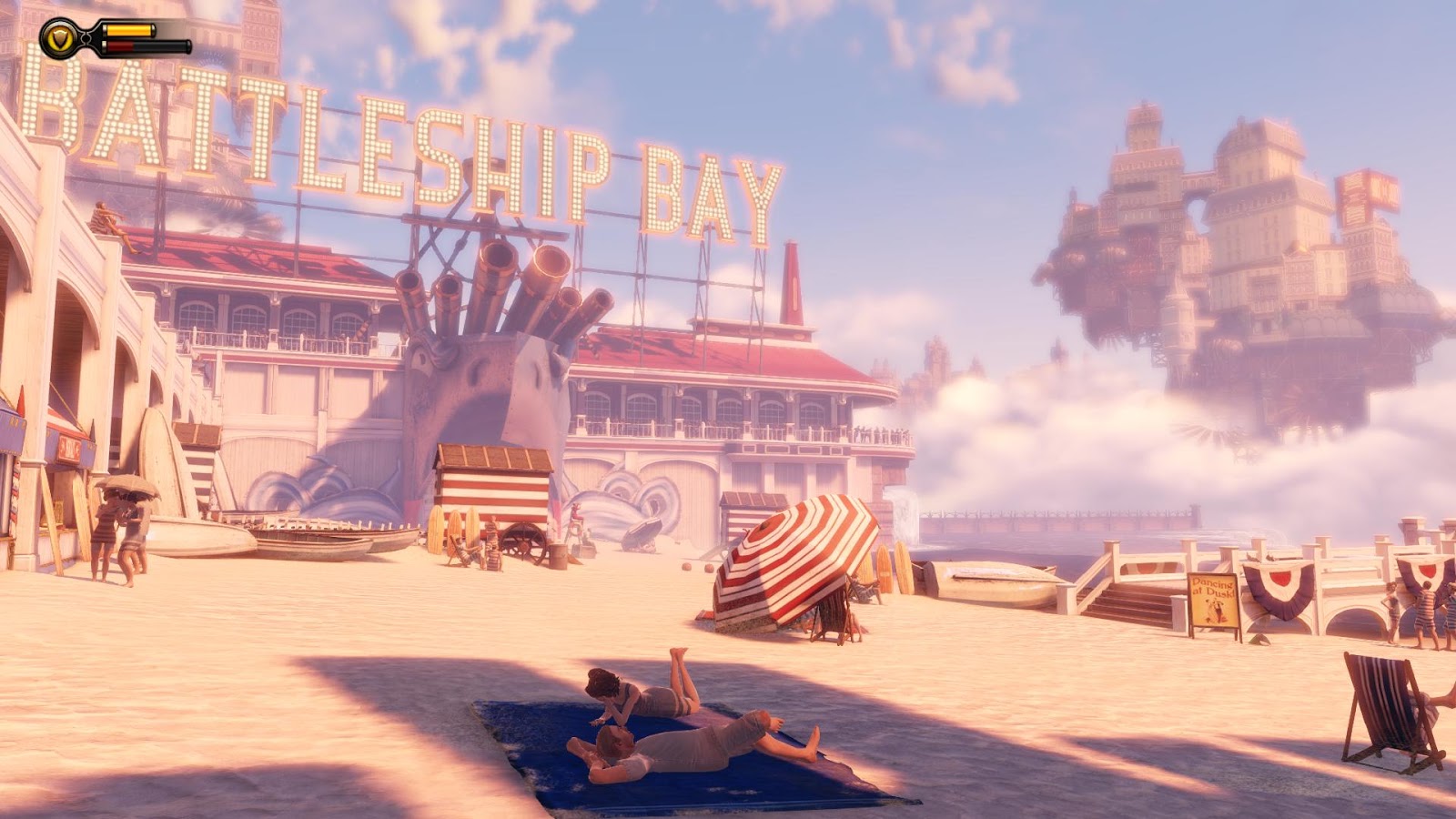 Narrative impetus tugs players in one direction, the area’s construction pulls in another. Any exploratory impulses must conflict with Booker’s witless hectoring. Do these mixed signals constitute bad design? After all, these vignettes exist to be witnessed. I wouldn’t search every barrel if I had not been trained to expect to find something inside, can’t that attitude apply to observational completionism? The player can grab the girl and leave, unimpeded, and that’s fine. But it’s the impatient enslavement to that ever-present liminal objective marker which is acknowledged. My way is ignored or contradicted by my avatar, even as he enables my behavior.

Patricia Hernandez at Kotaku has voiced similar frustrations. You constantly collect money yet you can’t buy Elizabeth ice-cream. You find carousels but you cannot ride them. Theme park influence on game design has been acknowledged in many quarters, and is deliberately invoked here with rollercoaster rails and ethnic halls of horrors. Yet here is a theme park made of ride after ride with nonsensical restrictions on pleasurable interludes. I’m sorry, you’re too tall for candyfloss.

There can be more to systems than gear and loot, gunfire and magic. Elizabeth understands this, why doesn’t Booker? He shows he can be more than the efficient soldier and dutiful debtor during one optional aside. While exploring a cellar, Elizabeth spots a guitar and says “Wish I knew how to play… might dispel some of the gloom.” A chord strums. Well, what do you know? Booker can play! Elizabeth accompanies a sweet but short take of Will The Circle Be Unbroken, piercing the foreboding menace with melody and handing an apple to a terrified child like a socially conscious Disney princess. 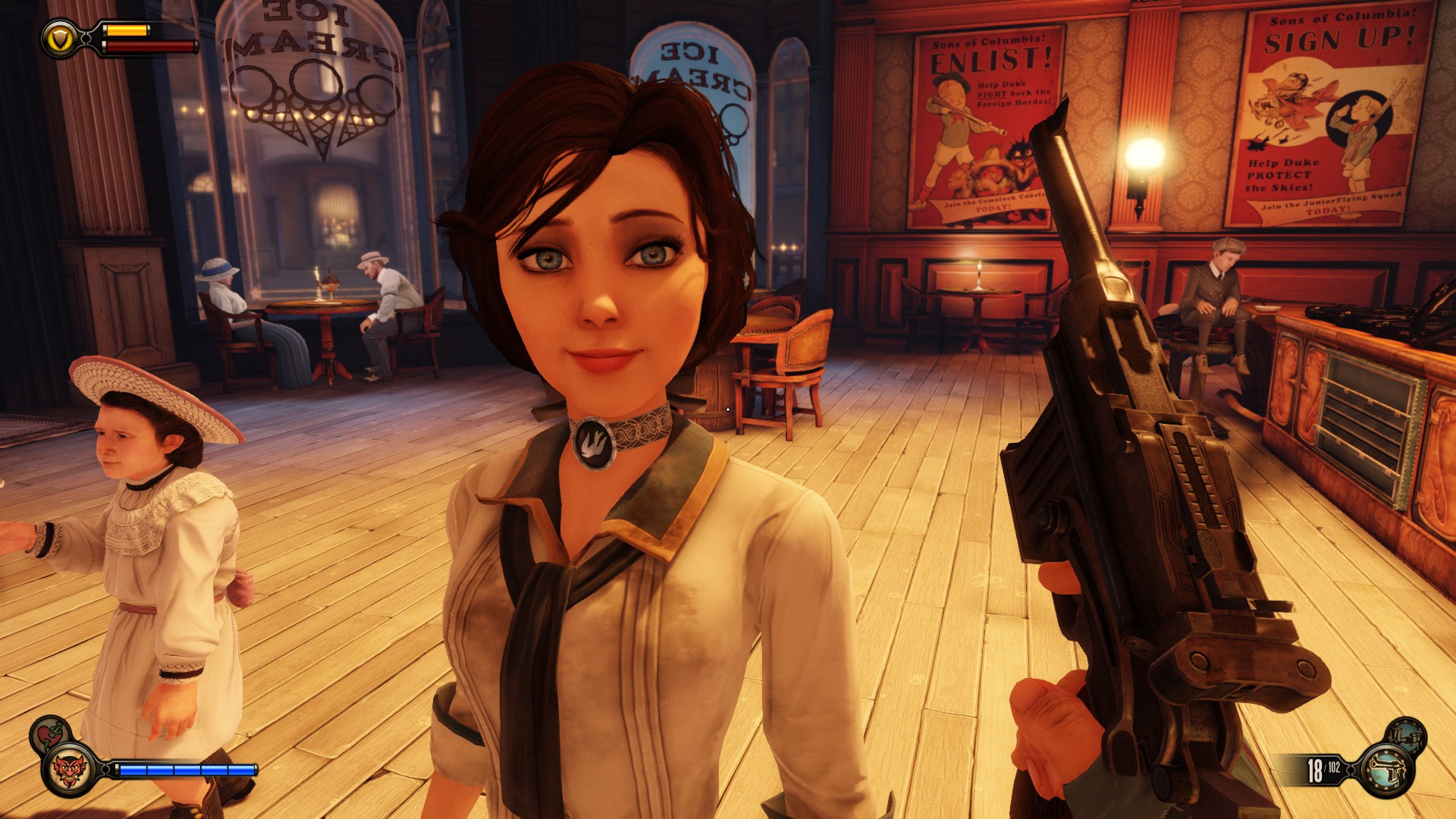 This musical interlude is so unlike Booker’s usual behavior that I am tempted to consider his ability to provide a backing track as nothing beyond a setup to parade Elizabeth’s sympathies. But even if it means nothing, it says something. If art’s great pursuit is to uncover what it means to be human, activities that aren’t essential to survival are central to that. Those living in dismal hardship will often sacrifice money which could be used on food for a little pleasure. We live in a world where troops on the front line in WW1 could stage a football match with their adversaries, after all. Fiction enhances its plausibility by recognising this impulse: Metro 2033 gave us a world at humanity’s darkest conceivable juncture, but still has room for music and sociability.

Bioshock Infinite hints at these tendencies, even tries to redeem its protagonist and itself in the process, but it’s primarily about what it means to have once been human, then contorted into the shell of a videogame character. Which just makes it even more heartbreaking when, amongst all the carnage, Booker and Elizabeth share a rare moment of touching human communication, revealing what could have been. And then the gunfire resumes.