Being Bad Is Good

Josh Trevett is stuck on an old conversation.

You seen this Cuphead video? The one where—yeah, you’ve seen it already, right? If you’re reading Haywire, you’re probably already aware of the nasty tangle of discourse that ensnared this bit of footage. This started happening about a week ago, which puts us way, way past when this would still have been timely to blog about. Too bad, I had an idea when the video surfaced and now I have to wade backward through the conversation to find it again.

I’m sure you’re already tired of hearing this part, but let’s power through it quickly. Does the video of Cuphead struggling against a simple cube and cylinder show game journalist Dean Takahashi being bad at videogames? Not necessarily; it shows him doing badly at one game, in one instance, while subject to an unknown set of distractions on a Gamescom showfloor. Do game journalists need to be good at videogames to be good at their jobs? Definitely not! The main qualification for writing about videogames is being good at writing, and having things to say about videogames. Being good at them might help you sell a few specific kinds of pitches, but that’s the limit of it.

A thing happens every few months in this small world of writers: a familiar old conversation comes up again, and then everyone sighs. “Ah, this familiar old conversation has come up again?” We haven’t settled anything, of course. We can arrive at the correct opinion every time, but we’re a long way from making ourselves generally understood. Even if someone writes the undisputed great work on what does and doesn’t count as a game, people are going to keep having that conversation, too. We shouldn’t hold that against them, please – it’s a naturally interesting question to ask when you’re just sitting down to have a good think about videogames.

But these old conversations do grate, in part because of the thousands and thousands of jerks on the internet determined to take the worst possible stances on them as loudly and as invasively as they can. The ensuing battle against the jerks often seems to overtake whatever we were originally talking about. To wit, a video of somebody struggling through Cuphead has become totally inflected by this particular conversation about player skill. But Cuphead can mean so much more, friends. 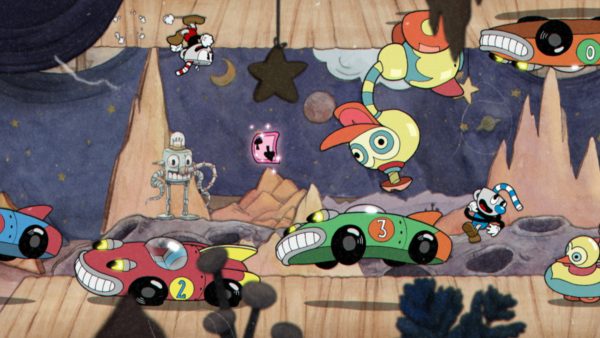 The point I haven’t seen brought up is this: what’s so wrong with getting stuck for a while, on a tutorial level or anywhere? We’ve all played games while temporarily poo-brained, whether we’re hung over, zonked out, fighting over the controller, just not trying, whatever. We all know it’s part of the fun to get befuddled for a while over something a child could figure out, to feel the sudden breeze of knowledge as we finally soar over that cylinder. That’s videogames. Don’t we like videogames? Why should anyone be upset at Dean Takahashi for playing videogames so correctly?

It makes a kind of sense that this video triggered the huge reaction it did. It’s a very good video! It entertains as it provokes. When you grok how to make it over that cylinder a full minute before the player does, that’s classic dramatic irony, and its effect is pleasingly amplified into a blithe humor by the unceasing saloon piano and by Cuphead’s dumb grin, the ready-to-go huffing and puffing of his action stance. He keeps confidently pointing up at the top of the cylinder, it’s hysterical. Everything is working in harmony here—level design, presentation, mechanics, player skill—to create a perfect little scene. Cuphead is our Saturday-morning Sisyphus.

When I first encountered it, the video hadn’t yet fallen into the hands of this discourse and was being picked apart for its lessons on tutorial design. I apologize that the Twitter thread is lost to me now, but there was plenty of smart insight. The cube and cylinder introduce too many concepts at once, somebody pointed out. Simply designing a more patient, drawn-out sequence of instructive hops could’ve seen players like Takahashi through the course much more promptly, and he may even have been better-equipped to handle the game’s real challenges by the time he reached them.

All good stuff if you’re looking for tips on design, but I say this tutorial is perfect the way it is. Don’t smooth away the opportunities for indignity – that gives ground to the notion that the only correct way to play is to stroll unimpeded through a garden of cultivated delights. That is the jerks’ view. And besides, what would be the point of Cuphead‘s cartoon visuals if the player weren’t roped into performing some slapstick? 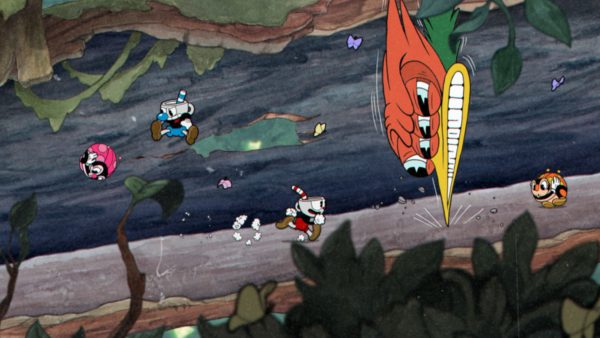 Get stuck between two walls for long enough and they start to sing, their potentials fully coming into view. We could hop onto the lower wall and dash over the higher one, sure. But if we don’t see that right away, then of course we should run against the wall, jump up and fail to reach the ledge, search backwards for clues, watch our idle animations. See how the space develops a character the longer you spend here? Why would you prefer to breeze through?