2017: The Year of Retrospectives

Welcome to Games of 2017, a celebration of some of the cool games that we played in the last year. Over the next few weeks, 30 writers will tell you about 61 of their favorite games from the last year. I hope you’ll have as much fun reading their laudations as I did.

For me, one of the most exciting parts about organizing this retrospective is seeing how high we can get the number of submissions to climb. It sounds shallow, but size is one of the core tenets of this round-up. It was born from the frustration of seeing endless Top 5 and Top 10 counts that listed the same couple of games over and over again. Given how many incredible games people create each year, it should be easy to come up with dozens, if not hundreds of interesting titles. A list of that scale would not only highlight more games, but different games, small games, weird games. We don’t exclude big hits from our retrospective, but despite all their bombast, these games really only make up a tiny fraction of this medium. The bigger your sample size, the better your chances of accurately representing that.

Still, there is a certain hollow joy in watching numbers go up (one that videogames often prey on) and at times I would get swept up in the excitement of trying to break last year’s record. I even found myself getting a little upset when I saw someone posting a personal round-up on their blog instead of adding to our big pile. Obviously, it’s a petty and silly impulse to judge people for what they do with their personal projects, but it’s especially silly against the backdrop of a list that is founded on the idea that every game – even the smallest game jam prototype – adds to the richness of this medium. We shouldn’t focus on one big list that drowns out all others, just as we shouldn’t focus all of our attention on one big release at a time.

I always want this list to be better than the last one, but I no longer think that means reaching a new record of games covered. Instead, I want us to do a better job of acknowledging our role in the critical community we are both a part of and deeply indebted to. With this in mind, we’ll start off a little differently this year: by honoring some of the other cool end-of-year/retrospective projects that are out there. I also want to to take this opportunity to once again thank everyone who took part in Games of 2017. None of this would have been possible without you.

I hope you enjoy the final list that we put together. 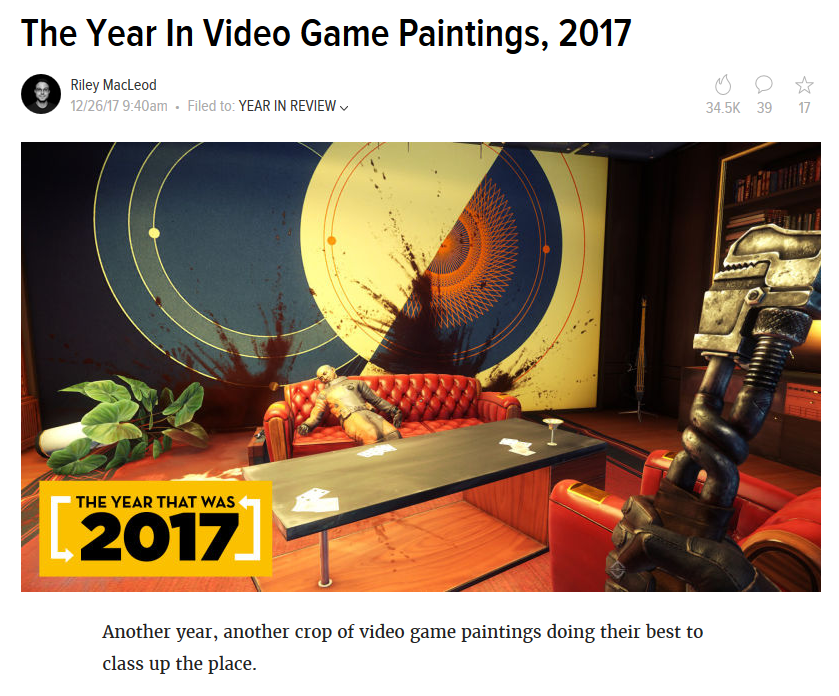 This is the second time that Haywire-alumnus Riley MacLeod went back through the year in order to discuss some of the artwork you find framed on digital walls, which hopefully means this is now a yearly tradition. I appreciate these articles because they work on many levels. On the one hand, decorative choices are one of the areas where games’ artsy aspirations often clash with their kitschy, mass-market style and there’s some good fun in looking at this tension up close.

On the other hand, the choices these paintings represent also show you a nice microcosm of the sort of decisions that go into completing a videogame, or any other creative project. Do you half-ass this tiny detail, or do you go overboard with it? Do you come up with something yourself, or do you use an established reference? Do you go for something that is realistic to the time period, or something that is true to tone of your work? Do you keep everything consistent, or do you go for a more lifelike mix of different styles? 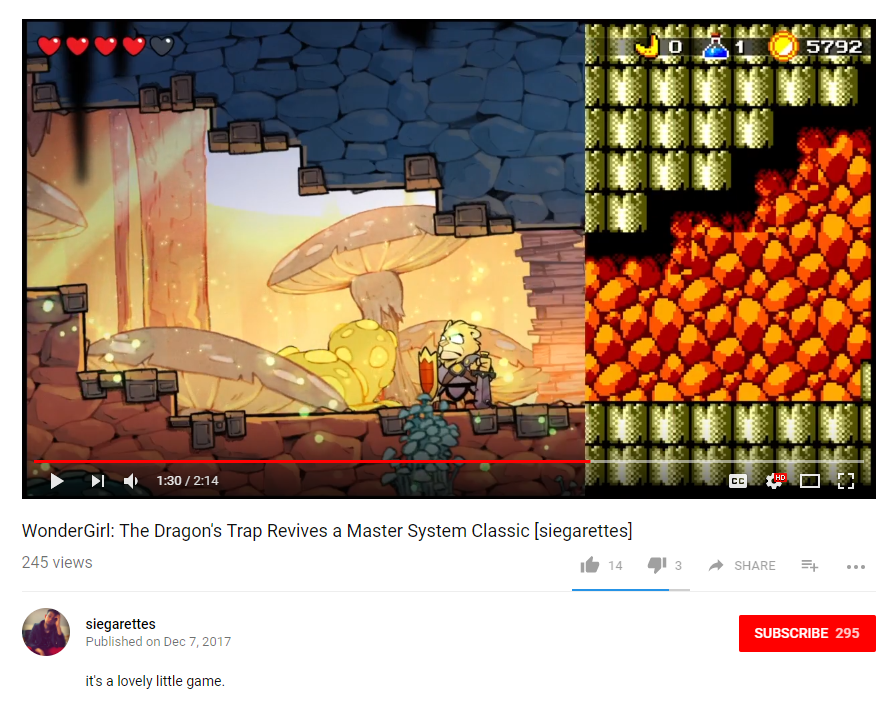 If you recognize Amr, then it’s probably for talking about how the Shadow of the Colossus remaster sacrifices the stark and memorable aesthetics of the original for the sake of a smoother and more conventional look. Which is kind of a shame: “controversial” takes on beloved games always draw a lot of attention, to the point where it can feel like they are taking up all the oxygen in the discourse chamber we call Twitter. So when Amr talks about the problems with the videogame canon, it generates a lot of buzz, but when they cover games that fall outside of it, not so much. The point is: they managed to spend an incredibly productive December making fourteen short videos about games from 2017 and all of them deserve just as much attention as the video essays that happen to fit the mold of the videogame zeitgeist.

Look, this one even has cats in it! Go check it out! 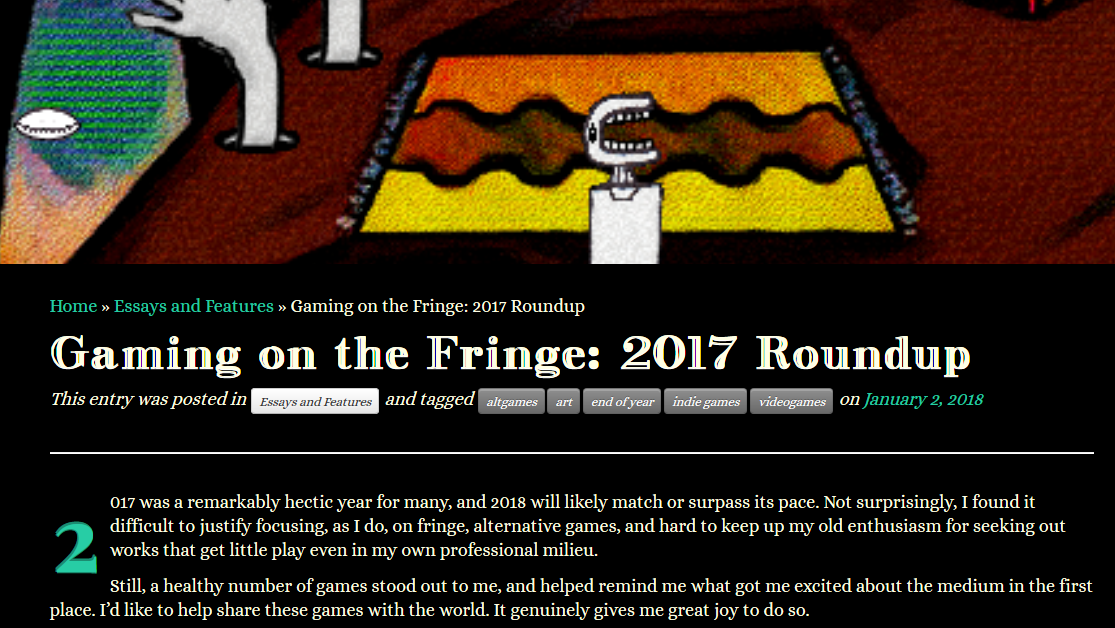 Lana Polansky is easily the most prolific critic working in our field today.

A few years ago, I tried to organize a weekly game crit reading group. Turns out I didn’t have the experience necessary to host good discussions, but I still think it was a good idea on paper. The reading list I curated seemed like a solid base: on the various topics I wanted to cover, I challenged myself not to include more than one article by any one author, so as to feature a greater variety of voices. This wasn’t too difficult, apart from the constant temptation to add more of Lana’s articles. No matter which subject I turned to, she had written a smart summary or powerful manifesto that was just perfect. In the end, she was the only writer to show up twice on our list, and it took some serious restraint not to let that number climb higher.

Her 2017 round-up features that same incredible writing. Not only does it showcase some truly hidden gems from last year, but it speaks to the themes of these games and the ecosystem in which they exist with wit and intelligence.

We often complain that the videogame scene is having the same discussions over and over again (is crunch bad? are games art? do they have politics?), but really, it’s no wonder we are moving in circles. In a community where debates like these are splintered across hundreds of small sites and often take place on ephemeral platforms like Twitter, it can be tricky to keep up even if you are around to watch everything unfold in real time. Critical Distance’s weekly roundups add a much-needed sense of permanence to these discussion, but as a historical document, they are more useful to scholars than your average reader – just as historians might study old newspapers to get a sense of the past while the rest of us would probably turn to a book.

Fortunately, Eric Swain has been providing us with the sites’ more comprehensive link lists once a year since 2010. The importance of this monumental effort is hard to appreciate in the here and now, when most of referenced works are still fresh in your mind. To really understand the importance of this roundup, go back to the very first one and see how many of these articles you would have remembered without it.