Horror movies. Has a genre ever produced such conflicting and varied views of the fairer sex? Across the history of film, the medium has constantly re-evaluated and re-represented its image of women, much as society itself has. It’s a creative art that has grown up in the 1900s, possibly one of the most wildly progressive decades in human history. Now, the representation of women in movies swings from character to character, few genres overwhelmingly sticking to tropes.

But, out of all the genres, horror has most frequently and consistently taken feminine influences and turned them into instantly recognizable tropes. From the parental fear of female puberty in The Exorcist and Carrie to the empathetic ‘final girl’, the virginal princess of slasher flicks who is allowed to live because she doesn’t have sex and doesn’t take drugs, horror films have a surprisingly rich and deeply-rooted connection to women. A comprehensive study of these links would be far too broad and overwhelming for such a small article, so for now, I’d like to condense the discussion down into two movies of recent relevance: the original The Evil Dead and its recently released remake. This will be spoilertastic, so continue at your own peril.

The first Evil Dead, made in 1981 by now blockbuster-maker Sam Raimi, is one of the most highly revered horror classics ever made. A rough, gory, messy film with an underpinning of slapstick comedy, the film was battered by censorship offices around the planet on its release, but has now secured its place in many a horror fan’s heart with its plasticine gore, swooshing camera and oddly endearing wooden acting. It tells the story of five friends who go to spend a weekend at a cabin and consequently fall victim to a malevolent dark spirit after they free it from a flesh bound tome known as the Necronomicon. I’ve always struggled to really ‘like’ The Evil Dead, despite my understanding and appreciation of its admiration, and it always comes back to one specific scene.

Early on in The Evil Dead, the character of Cheryl, sister of the series’ poster boy Ash, is hunted in the woods by a demonic force, before being pinned down and sexually violated by crudely anthropomorphic trees. It’s not the most excessively graphic scene of sexual assault in horror cinema, far from it, but it’s portrayed in an uncomfortable, sexualized fashion. The human characteristics given to the trees and the focus on Cheryl’s moaning tinge the assault with a cavalier immaturity that leaves a bitter taste in the mouth. Raimi himself has spoken about his disdain for the scene, and excised it from the sequel Evil Dead 2.

In the new Evil Dead the scene has a very different edge. The remake’s substitute for Cheryl, Mia, is held aloft in the branches, rather than lain on the ground with her legs splayed open in an inviting fashion. It’s more Vitruvian Man than the overtly sexual original pose. The anthropomorphic trees are gone, replaced by more natural twisting, thorny branches. The actual violation is considerably more brief, with actress Jane Levy playing distinct terror. The scene is staged to be disturbing and frightening, unlike the original where a young Raimi’s playfulness got the better of him and produced an uncomfortable, nasty scene that finds little defense even from its creator. 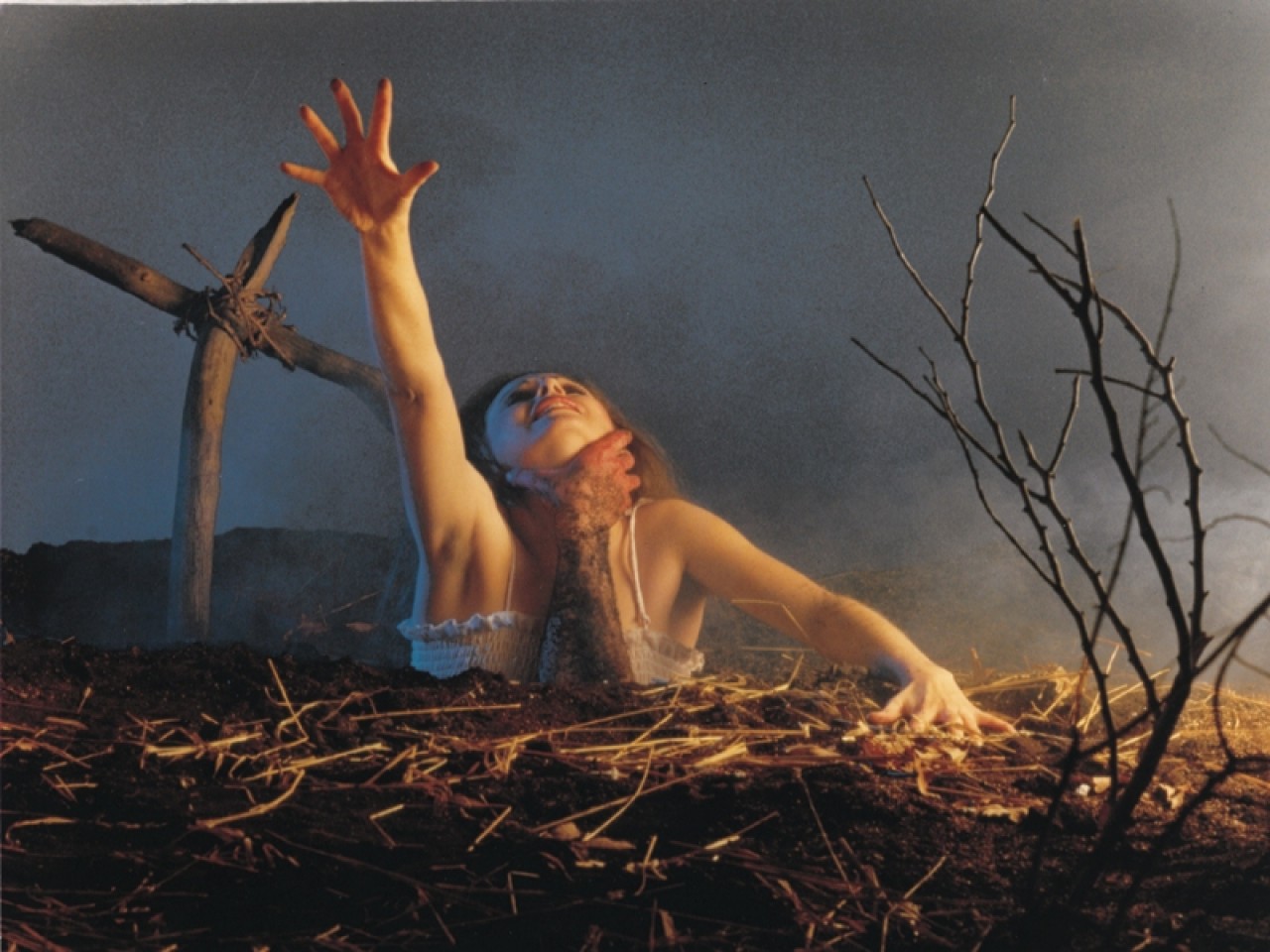 However, the biggest difference between the two scenes is not simply their direction, it’s how Cheryl and Mia are portrayed through the rest of their respective films. Cheryl’s rape literally dehumanizes her, turning her into the first deadite and the catalyst for the horrors at the cabin. It’s something she never recovers from, simply serving as slack character development for her brother Ash, who needs to overcome his mild and slightly weak nature. She never receives any justice for the crimes visited upon her, nor does she overcome them. Her role in the movie after the rape is just as disturbing and ill-judged as the actual scene itself. In the end, Ash destroys the Necronomicon, and in turn destroys his sister and the rest of his friends, leaving Cheryl nothing more than a victim for the entire duration of the film.

In contrast, Mia still becomes the first deadite, but instead of being destroyed by her brother, is instead saved by him. David, the almost-surrogate Ash, refuses to kill his sister and instead chooses to use the mythology of the book against itself, managing to bring her back to her human self. Beyond that, he chooses to sacrifice himself for her, destroying the cabin while still inside to stop the final deadite. Instead of becoming a tool to promote his ruthlessness, Mia’s rape forces David to finally take responsibility for his past selfishness.

This further character development is not limited to David. After he resurrects Mia, the mutilations and scars formed upon her are gone, her face clear and human again. It’s a nice metaphor, highlighting her transition back to reality and life after her assault. The final confrontation in the film takes place between Mia and the Abomination, the physical manifestation of her aggressor. In its blood-soaked climax, Mia destroys the creature with a chainsaw through the mouth, an unmistakably sexualized destruction. Rather than be a slave to her oppressor, as Cheryl was presented, Mia overcomes and eventually prevails. She is no longer a victim. She is a survivor.

There’s something oddly poignant about the way Evil Dead has twisted this scene. Horror movies are infamous for the idea of the pure ‘final girl’, spared on account of her virtuous, virgin nature. In Evil Dead, the final girl is one who was fiercely violated but, with the help of her family, overcame it and won. It’s a strong message, one that elevates the film from just another competent but unfulfilling remake, and it makes for an excellent twist on tiring mainstream horror tropes.