Opened World: The Remains of the Day

The Fallout series under Bethesda has often had weak central narratives. Authored stories focusing on warring factions or abducted children ultimately play second fiddle to player-driven action as shootouts make mincemeat out of enemies and Molotov cocktails explode in a fiery flambé. Despite Fallout 4’s plentiful voice acting and cutscenes, its narrative still assumes a secondary role to the emergent storyline that players create for themselves as they roleplay and freely explore the wasteland.

In lieu of the central story, Fallout 4’s authorial voice more clearly comes through in its environmental design. Specifically, the skeletons scattered throughout the Commonwealth (and also in previous games’ wastelands) convey the sad, implied micronarratives of the dead. I’m talking here specifically about those that are not tied to any story mission or displayed alongside the clichéd scrawled message on the wall. These skeletons are instead incidental, now over two centuries old after the advent of the nuclear war that ravaged the landscape. They provide unmarked, unspoken tales implied to the player by way of tableaux: their place in the environment, the props around them, and their curiously intact clothing.

These skeletons must be differentiated from the fresh corpses that abound in the wasteland, which signify the very recent dead—that is, post-apocalyptic raiders and settlers who have made a living after the nuclear detonations. Corpses are fleshy, bloody grotesqueries that often disgust or horrify, while skeletons are worn by time and convey sadder stories. Unlike the branching narrative paths that characterize the main narrative, these skeletons tell pre-war tales that cannot be altered by the decisions of the player. As Wesley Yin-Poole notes, the skeletons of Fallout tell the stories of those who lived “as the bombs fell.” Like the plaster casts of ancient Romans trapped under Pompeii ash, the skeletons of Fallout 4 capture the moment of death. 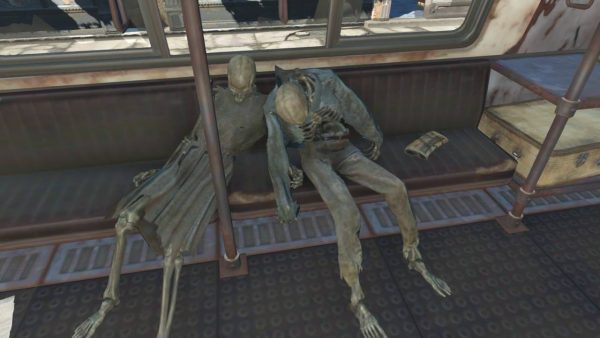 Fallout 4 carries an air of melancholy by juxtaposing the gritty post-apocalyptic setting with the mundane scenarios these skeletons convey. Skeletons seated inside a rusted bus suggest the instantaneous impact of the nuclear bombs, perhaps catching average people by surprise on their way to work. Pairs of skeletons resonate with particular melancholy, suggesting lovers, friends, siblings, or simply strangers who found a moment of desperate connection as the bombs fell. In the downtown Boston area, a deceased pair entwined on a couch with a wine bottle gazes skyward, and their bombed-out wall gives these dead a view of the stars. Because skeletons lack recognizable human features, the developers leave context clues like clothing or personal items that imply larger stories that we have limited access to. A child’s toy or a woman’s dress situated nearby gives fuel to our imaginations.

Fallout 4 reintroduces the Pulowski Preservation shelters, often home to the trapped dead inside. These shelters were designed as small, personal bomb shelters scattered throughout the city in the event of nuclear outbreak, and the bones found within them attest to the bleak outcomes of their implementation. Those who secured a place inside may have survived the initial nuclear blast, but because the shelters are cramped and lack provisions, survivors undoubtedly suffered from the slow death of starvation or the lethal effects of nuclear radiation. Some shelters contain skeletons with loaded handguns, often with blood splattered on the interior walls to suggest a grim demise. Moreover, the dead outside likely perished while failing to reach the temporary safety of the shelter, desperately running for their lives with whatever they were carrying as apocalypse descended. Because skeletons almost always accompany these shelters, the game implies that these installations were underhanded scams to cheat desperate people out of their money at the last second before the bombs fell, much like the opportunistic cash grabs and insidious purpose of the vaults. Two centuries later, it’s difficult to tell who would even have collected the profits when the radiation finally cleared.

Some skeletons are paired with written notes or recorded holotapes that the player can interact with to gain further narrative context. Written notes often take the form of journal entries, such as doomed accounts of the author’s fear of a nearing stalker, while holotapes sometimes transmit the sounds of people locked in a deadly last stand. One particular case study illuminates Bethesda Game Studios’s approach to environmental storytelling. Up in the Ranger Cabin, the player can find a skeleton in a dress. A nearby holotape tells the sad story of this pre-war girl as she offers her personal thoughts and anxieties on tape like a diary. She recounts the breakdown of her family: “Dad was shouting… mom just cried and somehow that hurt worse than anything else. She didn’t say a word.” The story is unrelated to post-apocalyptic action or nuclear threat, instead fixating on the crushing weight of domestic abuse on a young girl. While playing the holotape, the soundtrack cuts off, leaving only the intimacy of voice acting to visualize a narrative. She continues, “If it weren’t for the cabin, I wouldn’t have a place to sleep,” suggesting a longer history with this building that will remain undisclosed to us. We never know her name, but her final question on the eve of nuclear war—“Will anything ever be right again?”—rings with lingering despair. 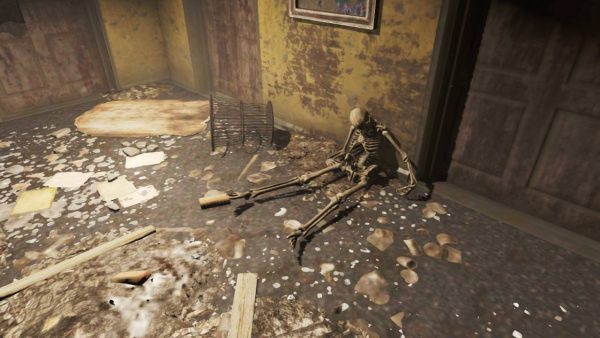 Skeletons, the often unheralded and unspoken objects that are found everywhere in this game, prove essential to the way Fallout tells its stories. These forgotten bones provide a clear sense of place and establish a somber mood that weighs heavily throughout the game. These skeletons are like installations that seem to bear witness to a memory long forgotten, evoking the silhouettes of people captured in the ruined walls of Hiroshima or the aforementioned plaster casts at Pompeii. These are figures that have witnessed a moment of instantaneous mass destruction. As relics from another era, the skeletons of Fallout 4 silently watch with blank expressions a world long gone.