Opened World: The Act of Looking

Miguel Penabella studies the gay gaze of The Tearoom.

The sexual lives of individuals have historically been and continue to be a political matter, where reproduction in the name of economic and political productivity is typically safeguarded against forms of sexuality deemed “unproductive” or “deviant.” As Michel Foucault notes in the first volume of his pioneering The History of Sexuality, this imagination of sexual deviancy is overwhelmingly defined by institutions like that of psychiatry and the police and “brandished the whole emphatic vocabulary of abomination.” During the nineteenth century, as studies of the welfare and health of populations intensified, sexual matters were of central importance, including such data as birth rates, sterility, contraceptives, and marriage and divorce rates. In particular, psychiatrist Richard von Krafft-Ebing’s 1886 study Psychopathia Sexualis introduced to the English language the terms homosexuality, heterosexuality, bisexuality, etc., thus laying crucial groundwork for the development of sexual orientation as a category for study and control. Indeed, Psychopathia Sexualis often served as forensic reference for psychiatry and law, thus demonstrating how sexual identity is socially constructed and only recently invented through the systematic, institutional usage of such terminology.

The Tearoom is precisely concerned with how institutions define homosexuality as deviant through surveillance practices, reflecting the central role of sexuality in establishing certain social norms to the detriment of entire groups of people. The game takes a page from the controversial 1970 sociological report Tearoom Trade by Laud Humphreys, in which the author analyzes the behavior and backgrounds of men engaging in male-male sexual encounters in public restrooms. Players cruise for sex and try to elude police attention in a public restroom in Ohio circa 1962, invoking a clandestine sting operation by Mansfield, Ohio, police who secretly surveilled and recorded male-male sex to imprison those caught in the act. Yang also directly references the notes and diagrams in Humphreys’s study, reconstructing the bathroom according to field reports from the 1970s, and the game also translates the body language and social cues analyzed in this study as its primary gameplay. The game is simple enough: through a first-person perspective, players can either pee in the urinal or look around. When another man enters the bathroom, players can quickly glance in their direction to determine whether or not the stranger is game for sex. In a ritualistic pattern of glancing, one must make brief eye contact to capture the other’s attention and then avert their eyes before looking back to see if an accepting gaze is reciprocated. Stare too long, and the nervous non-player character could become flustered, or worse, hostile, but successful glancing is ultimately rewarded with oral sex. Thus, the entire game is centered on this dalliance of glances, in which unspoken propositioning and flirting through eye contact captures the intimacy—and danger—of the moment. 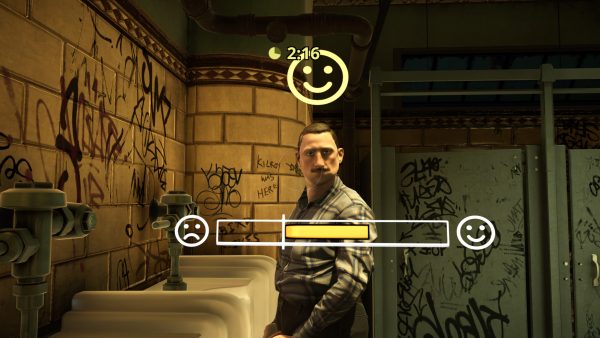 The other demand upon the player’s gaze is to monitor the window of the bathroom for fear of police presence outside, as the antagonistic eye of police surveillance remains ever-present. Plainclothes officers can pose as men cruising for sex as a means to entrap the player in the act of fellatio, and the knowledge that police surveil such spaces sows distrust. Only through the careful observation of certain behaviors and the bathroom window can players safeguard against police harassment. Thus, the gaze has a double function in the game: both as a tool of pleasure and self-preservation. Because the game lacks straightforward explanation of its rules and mechanics of flirtation, players—especially those unfamiliar with queer codes of cruising—organically learn the significance of eye contact in queer courtship. Thus, basic camera movement is never taken for granted. Simply moving the camera towards and away from characters becomes a historically coded and ritualistic mode of play that recreates the optical language of queer communities.

By framing The Tearoom in terms of sociological studies and police operations in the midcentury, Robert Yang positions the game within a much broader context of institutional attempts to define sexual deviancy. So why exactly are there so many rules and regulations against certain sexual practices? Circling back to The History of Sexuality, Michel Foucault offers one possible hypothesis, that the constitution of an “economically useful and politically conservative” sexuality is society’s endgame. In the case of The Tearoom, homosexuality is defined as deviant and criminal, where sex acts must be performed at the risk of police surveillance in the semi-public space of the bathroom. The game’s invocation of stealth game mechanics—in which players must constantly be vigilant of sightlines—contextualizes the act of gay sex as risky and necessarily clandestine, in effect, queering the act of stealth gameplay.

The Tearoom queers other videogame tropes as well, out of necessity due to a heteronormative videogame culture that similarly perpetuates an “economically useful and politically conservative” sexuality at the expense of queer voices. Yang’s own games are victim to surveillance; under the watchful and silent eye of Twitch, he is one of the most banned game developers on the streaming site. Thus, in a parodic move, Yang sidesteps institutionally “unacceptable” sexuality and nudity by replacing NPC human genitalia in The Tearoom with fleshy guns, which he argues is “the only thing that the game industry will never moderate nor ban.” Twitch’s moderation policies echo the old moralistic qualms, in which gay male sexuality and issues of consent and sex positivity fall in line with the “unproductive” forms of sexuality that are historically policed as deviant because it lies outside the contexts of reproduction. That videogames are often couched in discussions of productivity—whether or not choices “matter” in games, or the “replay” value of a work—immediately sets up the terms for value. Thus, while nudity in games like The Witcher 3 or God of War are relatively unaffected by Twitch’s restrictions, Yang’s games are often instead defined as pornographic perversion to be banned despite critical praise for their thematic substance and significance. Like Tumblr’s recent and controversial ban on explicit sexual imagery, Twitch moderates nudity in a way that—intentionally or not—reproduces such patterns of institutional control over sexuality while trying to keep their platform under a certain rating. Such measures follow a long history of the suppression of queer texts as these site-wide policies erase the valuable and subversive work of content creators exploring sexual identity in safe spaces and inclusive, affirmative communities. 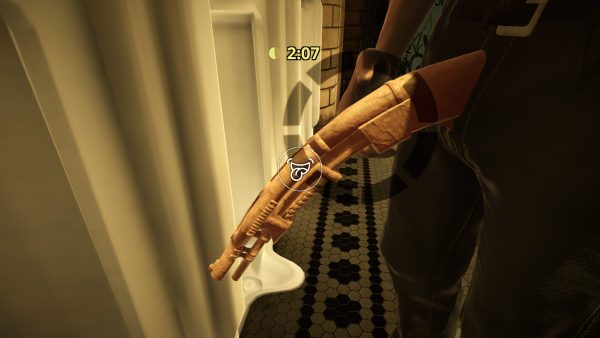 The competing sightlines at work in and around The Tearoom—the player glancing at strangers, the reciprocated gaze, police surveillance, and even the watchful eye of streaming sites ready to penalize Yang himself—all neatly throw into sharp relief an aspect of gameplay often taken for granted. The simple act of moving a camera and looking is often overlooked as a substantial act of play, but by largely limiting player interaction to this action, Yang locates the inherent political power in looking. The gaze affords certain reactions, serving as an unspoken language with its own ritualistic practices, rules, and restrictions. Even the most seemingly innocent part of play—moving the camera—is not without its own histories, politics, and competing lines of power.

Tags: The Tearoom
← Art Tickles – I’m Really Feeling It
Due Diligence: Not One Forgotten →