Miguel Penabella settles into the slowness of a small town.

There’s great pleasure in returning home for the first time in a year and finding that everything has remained exactly as you left it. Your bedroom looks untouched, your favorite restaurant still serves up familiar comfort food, and old conversations with friends resume, as though no time has passed at all. Homecomings evoke nostalgia, especially in small towns where great change never seems to occur and you can remember fondly, and even relive, the good old days. Night in the Woods follows this basic conceit, lovingly depicting young college dropout Mae’s return to small town Appalachia as she reconnects with family and friends and enjoys the cozy, autumnal warmth of her hometown Possum Springs. Much of the game’s first act involves rekindling memories of childhood, such as discovering the hiding spot that houses the dopey mallard parade float adored in her youth, or relishing in the simple joy of kicking up fall leaves. Such moments are bathed in a loving, golden light and are thus granted incredible sentimental value. Over time, however, Mae encounters various changes to the town. Returning to the town’s shopping mall may revive some childhood memories, but Mae can’t help but notice its disrepair and emptiness, many of its stores now permanently shuttered. Mae’s nostalgia is not innocent; it’s enabled by the economic, infrastructural, and social decimation of Possum Springs that has left her friends behind.

Night in the Woods filters the world through the perspective of the naïve Mae as a way to carefully unravel and critique nostalgia and the privilege that accompanies it, steadily undercutting its own autumnal aesthetic of warm, homespun imagery as concealing the underlying hurt that the protagonist fails to see clearly. The very notion of a homecoming depends on one’s ability to embark on something new, and the privilege again to return home once more. For Mae’s childhood friend Bea, there’s no alternative to Possum Springs: she’s stuck there. Like Life is Strange’s Chloe Price, Bea grapples with the recent loss of a parent and feels as though her future is slipping from her grasp while her friend is able to escape town for school. We learn that the sickness and death of Bea’s mother has resulted in unpayable medical debts, the loss of her beloved childhood home, and a jaded father who lacks the emotional connection that Bea so desperately needs. She is overwhelmed with work at her father’s small hardware business and undervalued for her efforts that miraculously keep the store afloat. And so, as Deirdre Coyle succinctly observes, Bea is tired. The passage of time is felt differently across social classes; Mae’s idleness and leisure is a luxury that Bea cannot afford. She enjoys the privilege of supportive parents that allow her to not worry about seeking stable employment right away, while Bea’s working class reality forces her to grow up quickly and learn financial responsibility to simply survive. The very structure of the game makes evident Mae’s privileges, as players must repeatedly return home to a loving family and safety net at the end of each day to progress the storyline, a stark contrast to Bea’s dreary home life. 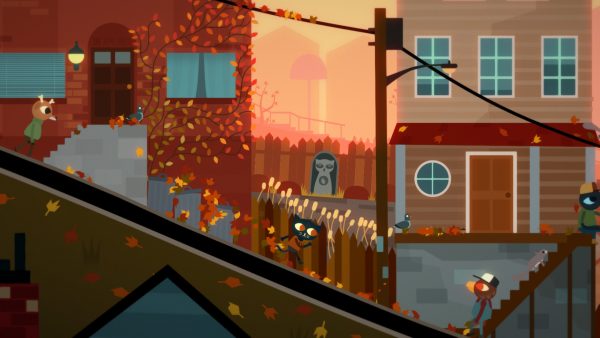 The first few hours of the game call attention to Mae’s aimlessness. Night in the Woods is largely structured around short sequences and minigames involving acts of youthful mischief with Bea and accompanying friends Gregg and Angus. Mae can partake in knife fighting, smashing cars, shoplifting, and breaking light bulbs with a baseball bat, often returning to parents increasingly concerned about her lack of communication about her college departure. This wayward lifestyle later becomes a subject of contempt for Bea, who in a moment of vulnerability expresses to Mae her bitterness towards her and Gregg’s juvenile antics. While they embark on wacky misadventures, Bea must shoulder the taxing expectations levied towards working-class women, as she must serve as both breadwinner and housekeeper. Thus, when Mae thoughtlessly recommends that Bea just quit her job if she feels so overwhelmed with stress, Bea fires back that Mae is “detached from reality,” as most folks lack that luxury of choice. Bea sees Mae’s return to Possum Springs as a betrayal, in which Mae squandered her privileged opportunity to leave a dying town and start a new life elsewhere. “I stayed here and got older,” Bea snarls, “while you went off and stayed the same.” Such confrontations also give Mae a sobering reminder of her privilege: “You gave up the thing I can’t have.” The words sting, especially given the knowledge that Bea was the valedictorian of their class. While Mae finds Possum Springs nostalgic and inviting, for Bea, the town represents a trap, a stifling place of burdensome financial obligations and alienating blue collar work.

Ultimately, Bea’s anger isn’t so much directed at Mae as it is towards a broader societal failure that closely mirrors and critiques our own. The disrepair of Possum Springs is a product of a government that fails the economy of small towns, fails to address homelessness despite available infrastructure, fails to provide proper mental health treatment as a result of alienating conditions of work, fails to regulate the safety and wellbeing of mine workers, and fails to offer affordable education. For Bea, thinking forward about her future or nostalgically back to her past is foreclosed; the anxieties of the present overwhelm the mind.

Given all this, it may be tempting to view the game as simply about “millennial egotism” as Jed Pressgrove would have it, but the game is far more interested in examining the institutional causes of such self-centered aimlessness. Rather than reprimanding its characters individually, the game acknowledges through repeated conversations that a lack of proper mental health care, educational opportunities, and other support structures are the broader factors that have intensified frustrations and Mae’s devil-may-care attitude. As Dawn Saas eloquently examines, the “perceived failure” of characters is caused infrastructurally and institutionally. These institutional failures have left these characters with only each other to look out for, and Night in the Woods locates forgiveness and sensitivity as ways to transcend the petty, interpersonal antagonisms that would prevent any kind of community solidarity. While Bea hates Mae for her immature flippancy and ungratefulness, she also realizes that she loves her, because Mae is the only one who really spends time listening and caring for her. The old mining jobs will never return to Possum Springs, but friends like Mae sometimes do, and she offers Bea what no one else in the town can: temporary joys, and a small human connection in an economic reality that would rather alienate and pit individuals against each other. 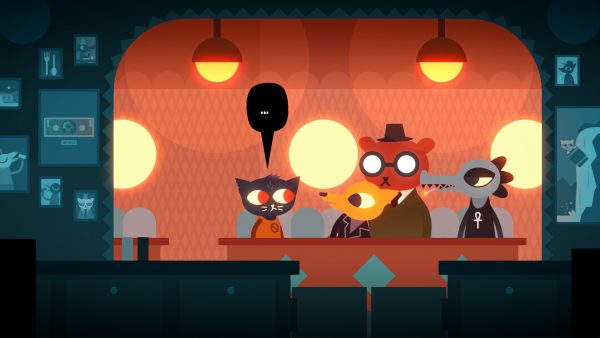 One of the great takeaways of Night in the Woods is this delicate negotiation towards some kind of civility and mutual cooperation. The game ultimately values empathy and effort, a willingness to “hold on to anything” (as its tagline suggests), and perhaps more pressingly, to anyone. The main characters of the game hold on to friendship and solidarity in spite of passing moments of selfishness or insensitivity, because maintaining that sense of community is better than capitulating to corporate interests that would keep them alienated and apart. Much later in the game, Mae can join riverboat captain Mr. Salvi aboard a salvaging vessel through flooded tram tunnels, drifting through the darkness in search of valuable trash. Taking a page from Kentucky Route Zero Act IV (the boat is even named Junebug), players essentially encounter and excavate history by traversing these forgotten, dreamlike spaces, locating the flotsam of a town rusting away on the belt. When Mae spies an old labor mural akin to those of the Works Progress Administration, she observes that such relics are “forgotten maybe, but not gone.” Possum Springs serves as a stand-in for real-world working class towns and the people who continue to live there, where decades of federal decimation of public welfare has left these places without tangible futures. For Mae, these public murals give her pause, as she reflects on a much longer timeline of Possum Springs beyond her own lifetime. In the shadowy, recessed tunnel walls beneath Possum Springs, lying half-remembered in history, these murals show workers standing in union and forming the building blocks of a real neighborhood. Years from now, these walls will surely collapse or the paintings will fade away, but for a moment, they existed. And that was enough.

Tags: Night in the Woods
← God of War, Unforgiven
Let’s Place: A Play in No Acts →