Off the Grid: Shantae ½ Genie Hero

Have you ever played a game and felt good by simply moving around? Enjoyed being there and living in the world that the developers had crafted? Maybe this happens to you every time you play a game and I’m a bitter old hag holding onto fleeting glimpses of joy. Either way Shantae: 1/2 Genie Hero is a game that awoke those feelings in me again so much that I could say go play it regardless of whether you’ve played a Shantae game before, I sure hadn’t. However since some people might want more details, I guess I’ll actually do my job.

Shantae: ½ Genie Hero is the latest game in the Shantae series that’s been around in one form or another since the Gameboy. It’s status as a sequel, reboot or what have you is joked about with not even the characters sure of which the game is, meaning that those wanting to get their feet wet in the series will not be lost aside from a few references. These really don’t impact the game but instead invite more curious newcomers to play the previous titles. Shantae is the titular half-genie that protects her home of Scuttle Town from the various villains that pop up. The story is less concerned with a grand epic tale and plays out much more as a series of semi-connected events related to building a dynamo to protect the town. You go around foiling various bizarre schemes,such as a phony mermaid plan, and intentionally or unintentionally you collect a new piece of the machine. The dynamo works well as a way to anchor the plot but feels rather mundane in comparison to the wackier characters and goings on.

The Tales series has a habit of telling mediocre stories that are saved by excellent character development. Shantae may not have the length to do that as well, but the character interactions are one of the game’s highlights that excuse the unexciting plot. The villains are all fun goofballs with equally silly plans such as summoning a monster to gain its merchandising rights. The main cast play off each other well and genuinely feel like a group of friends that poke and tease but love each other. The willingness to laugh at each other and the more ridiculous elements of the plot give the game this lighthearted feel that just makes me feel good and perfectly complements the easy, breezy, beautiful gameplay. 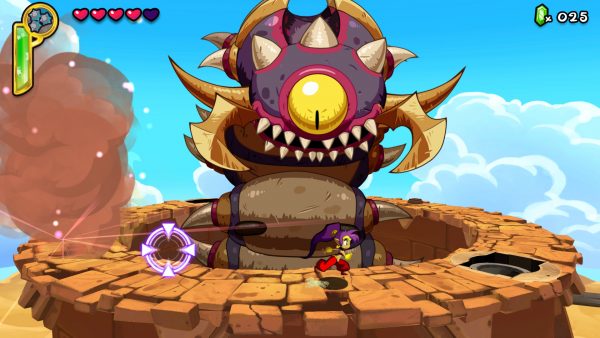 At its core Shantae is what’s known in most nerd circles as Metroidvania, a term I feel weird using as both those franchises are sort of fading into the background. That’s neither here nor there though, just know that you explore open ended levels that encourage coming back with new abilities to find items like more health or upgrades to older abilities. While most games of this ilk prefer either newer weapons or items to upgrade their protagonist, Shantae uses magical dances that transform her into various animals or objects. These range from dead useful like the monkey and harpy dances that allow you to reach new heights to humorously limited like the mouse dance which lets you get into specific small mazes. Is there a dance that is genuinely annoying or hinders gameplay, no not really. Every power has its place and tackling platforming challenges with different dances is fun in and of itself.

All this is not to say that Shantae’s human form is lacking or limited. The dances are mostly for new types of mobility while Shantae handles the combat. It’s pretty simple: you whip enemies with your ponytail,which can also be upgraded for speed and damage, and they go flying or explode because why not? There are magic spells like summoning a storm cloud or shooting off fireballs,but they feel superfluous as my hair got the job done much more efficiently.  The game is not looking to challenge you with platforming pitfalls though there are some, it’s more asking you to explore and figure out how to use your abilities to surmount a given puzzle. Exploring feels natural, like this world really is a world and not some big puzzle. There is a beautiful eureka moment while looking for an entrance to a side path when I realized that the entire structure was a maze for the mouse form. The maze was right in front of my face but seemed so natural to the level’s architecture that I paid it no mind on my initial trek through the level. I could gush for a while but in all honesty the purity of just how well designed the game is  something that needs to be experienced for yourself

Shantae: ½ Genie Hero does hits nearly every element out of the park from fun characters to excellent gameplay. I actually looked forward to playing this game every time I put it down, just to poke around and find a new health upgrade or gallery key for concept art. Sure, the game is on the short side for the twenty dollar price tag, however the game has enough meat on its bones and the promise of DLC to make this a worthwhile purchase. I mean it warmed my icy husk of a heart, so imagine how well adjusted people will like it. In all seriousness this game is worth every penny, go buy it right now.