Off the Grid: Tomboys Need Love Too!

Allison Winters needs a warm shower after this.

I’ll be the first to admit that not every piece of fiction needs to blow us all away, and considering the run of excellent visual novels I’ve been enjoying lately I suppose it was time to be brought back to the harsh reality that most games I’ll play are like me: pedestrian, with little to offer outside of competence at the craft. That’s not to say this is a bad thing, more that Tomboys Need Love Too! fails to stand out.

Most visual novels like to give the player choices and send them down different paths that play out those choices’ consequences. This game grasps that concept, however the writers don’t seem privy to that detail as they do their darndest to push the main girl, Chris, on the player. The plot is so into the main pairing that any attempts at drama feel contrived. So when a rival for your love does show up it’s less interesting love triangle and more how long does my main character have to act like a moron before we choose the heroine.  I achieved the game’s happy ending with the titular tomboy and have no desire to see another path, since I feel my choices wouldn’t result in anything else worth while. Every choice that could push Chris away makes you feel like a complete heel, so why bother? It doesn’t help that the minuscule cast of five characters (and I use that term loosely) is so poorly developed that I can’t be asked to care.

The game has you guide the eternally dense Kai as he realizes he may have feelings for his best friend Christina, or Chris for short. If the story had just been between these two discovering their love with no dramatic fluff it would have a been a sweet if overall dull plot. However this brings us to the only other character with more art assets than a character portrait, Sophie. She is the epitome of poor writing in a game that’s pretty hackneyed to begin with. She’s built as the queen bee of the school, with Kai playing the role of the loser. So when she deigns to talk to him it immediately sets off red flags. Her reputation as a man stealer is given no justification, she seems hellbent on screwing up Kai/Chris pairing out of sheer malice. Maybe one note villains are in nowadays, and I’m a weirdo for wanting more than two seconds of character development shared between the game’s three main characters? 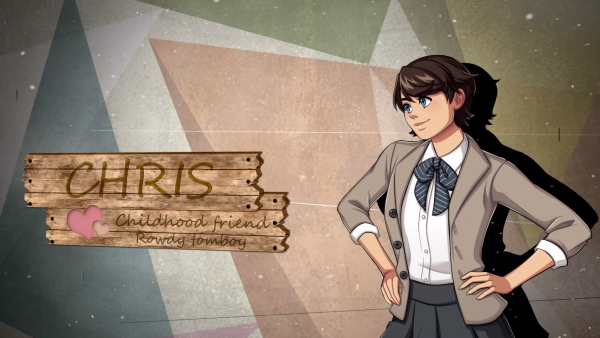 Kai is so dense that he can’t figure out his boat is sinking till he’s actually underwater. In an early scene that speaks volumes about his character more than anything I could say, he peeks on Chris in the shower and watches her pleasure herself whilst moaning his name. After this he still wonders whether she’s into him or not. Sure, some people can send mixed messages, but everything about Chris’s flirty behavior before and after this scene makes her attraction blatant. By the end I wanted to slap Kai and Sophie for holding up the plot for way too long. Had this game been more about Chris and the issues in her head, instead of Kai endlessly fretting about problems that don’t matter, I could’ve forgiven it a teensy bit. Chris clearly has body image issues, and while that’s not the most original burden to saddle a female protagonist with it could have served as an excellent jumping off point for other issues like gender presentation and what it means to have a female body. What’s that? Let’s just rely on tired old stereotypes and wooden dialogue? That works too, I guess.

The game’s art and music are probably the most competent part of the package. The art style makes all five of our characters look very nice and the limited animations are smooth. The main trio makes me think someone on the dev team wanted to draw out their Berserk highschool fanfiction. The leads bear an uncanny resemblance to Guts and Casca sans muscles and scars with similar hair and skin tones and Sophie bears a resemblance to series antagonist Griffith with her silver hair, insane jealousy and sleeping around. Joking aside, the art is lovely and the music suits the mood, although it can be a little bland.

The game does have an 18+ patch, which strikes me as odd since the game is already so sexually charged and explicit that I can’t really see what the point is unless you really need to see Chris’ little biscuits that badly. Speaking of, I’m usually a person all for sex positivity but here it feels skeezy. Most of the more explicit scenes serve as titillation rather than actually bringing something to the table plot-wise. Lady Killer in a Bind wove the sex into the narrative seamlessly, and I know they can’t all be that masterpiece, but at least make the effort to inject some passion into a scene.

Tomboys Need Love Too! is average in every sense of the word. It doesn’t bring anything new to the table, instead offering a competent experience that plays it safe. It’s a game with nothing to say and writing that denies the player the satisfaction of their choices having any meaning. Those who dig airport romance novels will find enjoyment, but the rest of us are left wanting something more.

Tags: Ladykiller in a Bind, tomboys need love too
← Opened World: Fictions Within Fictions
Playing for Real: Freedom of Choice →