Off the Grid: The Vagrant

I enjoyed The Vagrant, yet there was this one bugbear of a detail that kept shoving itself in my face. The art is gorgeous yet the main character, Vivian, looks like she was slapped together by a gaggle of lonely perverts. Running around and dicing the local monsters feels immensely satisfying yet Vivian’s breasts wiggle in a way I’ve never seen before. The story tells a dark narrative yet our main character is running around in torn leggings and a strip of fabric masquerading as a bra. The breasts seem to want to be the focal point but end up a distraction instead.

To say that the character designs and its complete distortion of how the female chest works detracts from the experience would be an understatement. I was having a fun time as I explored this troubled fantasy land and laying waste to various monstrosities.  Yet every time I saw Vivian’s jiggly friends I asked myself: how did this happen? Almost every female in this game has a disproportionate chest that throws off otherwise good designs. They are all stuffed into too-tight dresses, or barely dressed at all, and it looks awful. Every other aspect of the art design has clear thought and care put into it, with every sword being a unique model that changes when Vivian equips them. Why not extend the same courtesy to the armor, so I’m not running around looking like a moron who forgot to wear any? This character is supposed to be a mercenary!

Still, playing as our well-endowed soldier of fortune feels wonderful. Sword slashes have weight to them and a simple combo system keeps things interesting along with some light RPG elements. While it feels good and often rewarding to explore every nook of the world, it was marred by platforming elements that felt like an afterthought. Luckily for everyone involved, these sections are few and far between. I never felt like exploring wasn’t worth it and combat rarely grew dull. Each area’s boss felt unique with a memorable design and a set of attacks to plan strategies around, in lieu of just tanking the hits—which made each victory satisfying. 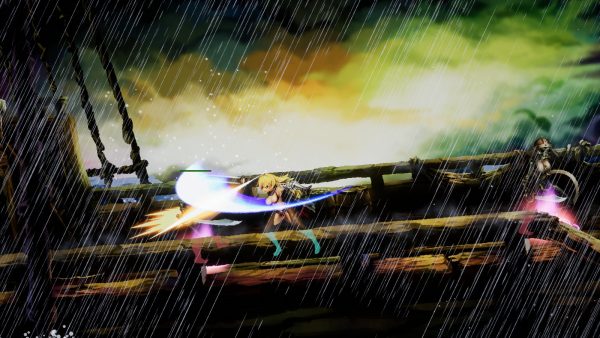 I wish the story was just as engaging as playing the game was. It’s a well-told story about revenge and self-sacrifice with plenty of twists and turns, it’s just not overly compelling. It skirts the line between being dark for darkness’s sake and actually being mature. The characters have believable motivations, and while most characters are nasty to Vivian their attitude is justified: she is a mercenary and most people look down upon those. It’s not bad, but not great, is what I’m trying to get at here.

The Vagrant makes some missteps along the way in terms of character design, yet most other aspects are polished enough to make up for it. I never felt I was slogging through this game and was always at least mildly engaged. Even the female fanservice adds a comical element that, while not intentional, can at least be taken for a cheap laugh. Definitely worth checking out if you’re looking for a good time…if you know what I mean.

Tags: The Vagrant
← Oxenfree and the Poetics of the Inexpressible
Opened World: Death with Dignity →