Off the Grid: Tangle Tower

Spoiler-free run down: If you’re looking for a compelling character-driven murder mystery then go download this on your platform of choice.

I cut my teeth on many a cheesy mystery novel in my youth, and to this day the murder mystery remains one of my favorite types of fiction. Then I found games that let me step into the role of amateur sleuth and I fell even harder for the genre. The highlight of stories like these, besides stroking my own ego, because no mystery is too tough for me, is the level of detail that goes into the characters and plots. The better ones work as an interesting character study of those involved in the crime. Tangle Tower decidedly hits those notes with precision, crafting a layered mystery revolving around a wild cast of characters. It explores themes of isolationism, and the effect of existential dread on the mind, all under the guise of a clever locked-room mystery.

Tangle Tower follows detectives Grimoire and Sally as they investigate the murder of Freya Fellow at the eponymous tower. The home is inhabited by two families, the Fellows and the Pointers, who are all oddball recluses with noble lineages.The detectives follow leads that ultimately turn out to be harmless misunderstandings, but that serve to highlight that everyone is eager to lay the blame on another. Though at face value it seems to be malicious, the game presents it more as shocked people trying so desperately to make sense of what seems to be a pointless murder. Fifi Fellow wants to point the finger at her cousin Fritz, whom she saw with what she believed was a knife, the supposed murder weapon. Tangle Tower is asking you to look past their actions and focus more on the meaning behind them.

Through the investigation, we glimpse the deep trauma that pervades the tower’s residents. Though it does require a keen eye as much of the info is hidden in the background of various pieces of evidence or through off handed comments from the suspects. The best examples of this is Flora Fellow. She never utters a word throughout the game yet I learned so much about her just through minor details and what others had to say about her. She’s lost her father whom she loved dearly and her only real friend, a rare bird, is gone as well. The only thing she has left of said bird, a feather, is stolen from her as well. Her husband, Felix, is shown to be a self-absorbed idiot who was neglectful to Flora. He spent most of his youth as a would-be explorer with little to show for it, leaving Flora by her lonesome. He’s trying to make up for his mistakes, shown by his crude homemade figurines, but it’s too little too late. Even the murderer, Penny Pointer, takes the time to knock out Flora during the murder to avoid scarring her more than she already has been. She’s been refusing to talk for sometime, instead remaining isolated, a shell of her former self. 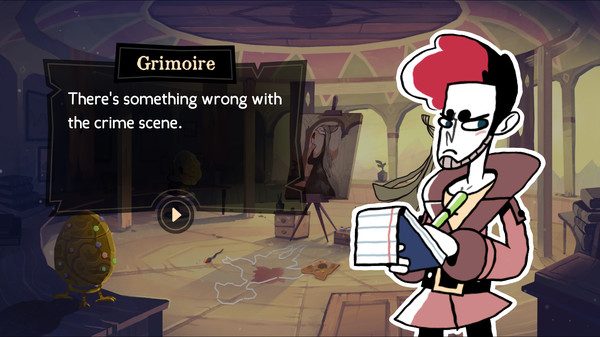 The Fellows and Pointers tend to deal with their problems by doing nothing… surprisingly not a good strategy. Whether or not it’s just a coincidence of the medium,the characters all feel very isolated both physically and emotionally. Only seeing them in one specific room of the tower till the very end. For example, Fifi is holed up in the library and when asked about Flora doesn’t seem to even care that her mother is a miserable recluse, and honestly comes across as if she never has, instead more absorbed in her own pursuits. You never see them interact with each other and it adds to this sense of loneliness that infects the tower. Like the tower itself, the relationships are in shambles and the issues run deep.

While Freya’s outgoing personality and curiosity are her downfall, it helps to frame her as an excellent counterpoint to her murderer. Freya and Penny are both searching for the darker side of their families and the tower itself. They both came to the tower on their own terms, being distant cousins to their family there. Both are presented as far-out free-spirit types. The key difference is that Freya is sincere and Penny only wears a mask of sincerity. Freya is always trying to help the tower’s other residents and is filled with a lust for life, which comes out in her paintings and various other hobbies. She’s looking for the mansion’s darker secrets not for her own gain, but to help convince her cousins to leave the tower and be free to pursue their goals away from their broken families.

Penny, on the other hand, is using the family secrets to search for purpose in her life. She’s left multiple times to find the parts of the family who had gone off in search of strange creatures that have been escaped from the island that Tangle Tower is built upon. When she had found them she saw that they had given up on this task and were living normal lives and this drove her to murder them. While Freya wanted the best for her family, Penny only wanted to use them as an escape from what she saw as a pointless life. Ultimately Freya’s own discoveries are what lead to her death as Penny having lost any sense of direction in life, can’t lose the only safe space she has left. Despite her hatred of the tower. While so much of this is dropped via an endgame motive rant, the game leaves the finer details vague for the player to figure out themselves. It’s a respect thing. 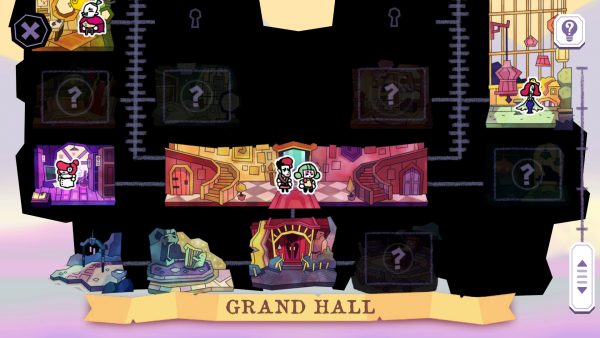 The two detectives have no problem getting to the bottom of this tangled web due in no small part to their excellent teamwork. Grimiore plays the straight man to Sally’s deadpan jokester, but it’s so much more than that. They feel like a team, both are piecing together the mystery with equal contribution. Sally has this sense of macabre glee at getting to be involved in murder mystery cliches that belies a deeply analytical eye. Meanwhile, Grimiore’s fragile ego and exasperation at the antics of others hides his actual intuitive nature. They play off each other so well in the more comedic moments it’s little surprise that when they get down to business they perfectly complement each other’s skill sets. It’s just more of that loving detail that the game is bursting with.

Tangle Tower has given me so much to think about this past month and I’ll probably be thinking about it for months to come. A beautifully crafted story and world that packs so much detail into it to really give the player something to chew on. The only mystery left is why you haven’t played this game yet… I’ll see myself out.