Off the Grid: Interfectorem

Allison Winters is setting fire to these lampshades.

I feel I should acknowledge that in the past I may have been too critical on younger or new developers, most likely stemming from my own self loathing. Most of the time their efforts aren’t terrible so much as unrefined. Maybe it’s time to take a different approach and help point out some flaws rather than be a sarcastic she-devil about every little detail. In that vein I’d like to draw your attention to Interfectorem,a game made by a group of teenage girls… I just open myself for punishment don’t I?

Interfectorem is not that bad a game considering it was made at a summer camp by a rather inexperienced team of young ladies. How fondly you look upon this game is going to be dependant upon how tolerant you are of glitches, of which there are quite a few that will be discussed later. However, the characters and story make up for the flaws by being enjoyable overall and downright clever in certain regards. If you can look past the shoddiness of the technical side then be prepared for an alright experience that shows promise.

Interfectorem is a point and click adventure game that has taken a hammer to the fourth wall as this type of game often does. The story follows Alis as she explores her little backwoods town and investigates the murder of her sister and ,by the end, the rest of the town. The gameplay is fairly standard: you click on every object in sight and you either get dialogue, some flavor text or an item. You are occasionally asked to solve simple puzzles but those are few and far between. It felt like the team was testing the waters on what they wanted to do with the gameplay and given another shot could really expand. 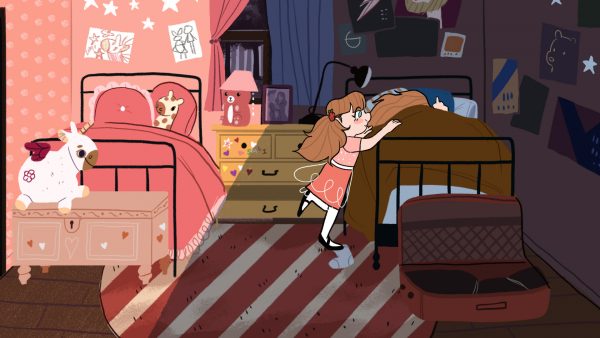 The aforementioned fourth wall breaking is where most of the dialogue runs into problems. The story is littered with clunky jokes about game mechanics and memes. There are hidden gems here and there such as a scene where Alis is just not having her friends’ nerdy conversation about Hetalia .There is a clear understanding of what’s known as painting the medium with various jokes revolving around how text is presented but it lacks a smooth implementation, like how say a Paper Mario game would. The games refusal to take it self seriously, including the cheesy ending, for the most part gives it a charm even if the jokes don’t always land. The story moves at a quick clip and even with scouring everywhere you can finish the game in around an hour or so. Despite the faster pacing we’re still treated to a setting that gives off a cozy small town vibe, and a fun story that actually drops hints about late game reveals such as the true villain and Alis’ connection to the serpent that has been lurking in the background.

The game has a Gravity Falls style about it, with the air of weird goings on in suburban America. The art reflects this with most of the characters looking like quality fanart of said show. There is a sense that this town has more under the surface than it’s letting on, and that this whole incident is just one of many crazy things going on. There is a witch in the forest, magical creatures exist, and a whole subplot about Alis’ missing parents, that while hastily resolved is a well of mystery upon itself. I’d love to see this place expanded upon in the future.

The short game time results in the characters being rather one note, mostly an awkward note, but they succeed in being likable. Alis as the main character gets to be the deadpan snarker about everything she sees and makes it easy to relate to her. Thus when we get to the second act and her sister is murdered, her grief is palpable. She’s lashing out at people in a vain attempt to make the pain go away. She becomes more and more desperate as the killer eludes her and the bodies start piling up. Alis’ best friends are again rather awkward but in a cute way. I weirdly wanted to know more about what made Ash tick mostly for her obvious crush on Alis, but also because unlike Isaiah we don’t get much on here besides the crush and that she has a small working knowledge of town lore. The game’s refusal to take itself seriously, including the cheesy ending, for the most part gives it a charm even if the jokes don’t always land. How well that succeeds will be tested by the game’s more technical issues. 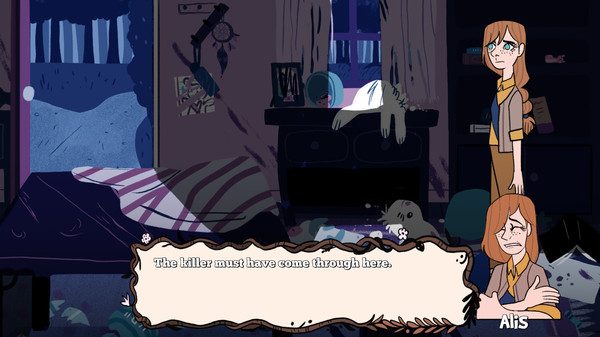 First and foremost the save system just does not work, oh you can save till the cows come home but good luck loading anything since you’ll just be brought to the screen you were last on with no way to interact with the world.The short length means that it’s easy to complete in one sitting but that’s akin to saying, “Welp, the boat’s sinking, but at least I can swim.” It is also plagued by a few small bugs here and there such as disappearing dialogue boxes and certain scenes just freezing. This wouldn’t be so bad if the save system worked. The developers are working on trying to patch some of the problems and in all honesty once I was hooked in I didn’t stop playing till I finished it.

The game’s real sin is a lack of polish. I know I’ve been nitpicking this whole time but the product as a whole shows potential. The world and characters have a certain fun about themselves that allowed me to look past the less than stellar aspects of the game. Admittedly this does feel like more of a longform demo in some regards but I feel given time and funds there is a bright future for the girls who made Interfectorem.