Allison Winters prefers when the stars were her projectors.

My first experiences with Devil Survivor 2 back in 2011 were ones of confusion and frustration. I adored the original Devil Survivor even though I couldn’t beat it. The stifling atmosphere as society falls apart around you and the bleak tone endeared it to me, along with the Shin Megami Tensei (SMT) staples of demon fusion and morality paths. While Devil Survivor didn’t quite scream for a sequel, I bought the sequel anyway. I didn’t care for it all that much; it felt a bit lazy, plus it kept kicking my butt. But with the release of the 3DS remake, Record Breaker, I decided to step back in.

Devil Survivor 2  and by extension Record Breaker retain the same core gameplay as the original—shocking, I know. It’s a turn-based strategy game akin to Fire Emblem but on a smaller scale and with more control over how the individual battles play out. You form four teams made up of the various humans and demons you’ve fused or bought and travel the maps to defeat bosses or activate some doodad. The demon fusion is still here and is still as deep as always. With the addition of various modifiers gained in battle, you can strengthen your demons even further by giving them access to a larger move pool to choose from.

The game didn’t exactly overhaul the battle system as much as it eased the old one’s frustrations. It added the Demon Compendium, allowing you to register and resummon your favorite demons and make it easier to customize your human characters. The only change that doesn’t work is the new Devil Auction. Gone is the original’s regular auction, which functioned like a real life auction; instead you now get to play a guessing game. You’re presented with all the participants’ average bids and then you make a singular bid off of that info and the various cues given during the five second auction. It’s not particularly hard to win, but it sort of takes the fun out of the auction. When it all boils down to an educated guess; the thrill of reacting and trying to outbid your opponent is lost. 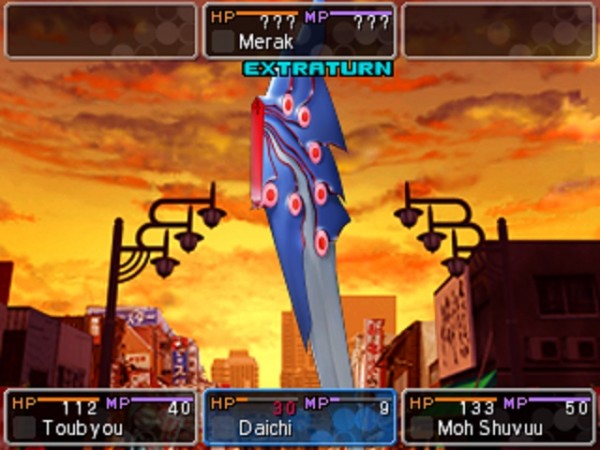 The remake, Record Breaker, adds a casual mode that I played to compare to the original and not because I’m awful at this game. Even on easy, though, if you don’t think out moves or target weaknesses, enemy parties can rip through you. Like any good SMT game from the PS2 era onward, hitting a weakness grants extra turns while hitting with moves the enemy is strong against takes your extra turns away. Those looking for a challenging, deep RPG will not be disappointed; those looking for a great story may be left wanting.

This is a standalone sequel outside of a few nods to the original and general theme of survival. The basic plot is that humanity is on trial for being awful and the Stars of the Big Dipper, the Septentriones, are the judges. The Stars have a timetable, one major foe per day, and the game falls into a weird routine for the first few days. You meet a new party member or two and end up having to save them, then find that day’s Septentrione and defeat it either via pure willpower or with the help of some demon or technology. Once you hit the fourth day, things become a little more free form as the plot becomes Nocturne, sans being BFFs with Satan. Once it ultimately gets going the story is quite enjoyable, though it lacks the bite and substance of many other SMT games. In Nocturne, the various avenues you could pursue all had their ups and downs, but Devil Survivor 2’s various ways to restore the world all seem clear cut and lack moral ambiguity. Additionally, trying to explain the reasons the characters choose a faction comes off as an afterthought, missing an opportunity for depth.

Record Breaker also adds a new campaign, the Triangulum arc, that fares a little better, though it goes a little too 90’s JRPG for my tastes. It plays with the world-as-data concept brought up in the Septentrione arc and focuses more heavily on fate and memories à la Persona 2, though these themes are explored somewhat shallowly. The Triangulum share the same alien design of the Septentriones while being a tad more horrific to look at. Its faster pace gives it a bit of a rushed feel, but overall it’s an interesting epilogue to the main game. 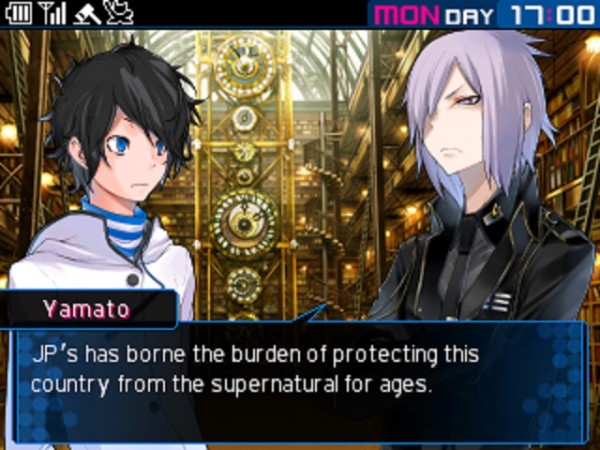 Lifted from the Persona series is, of all things, Social Links. For the uninitiated, Social Links are bonds you form with your party to aid in battle. Here it is called the Fate system, and it grants various in-battle bonuses to a character and unlocks unique fusions. There is nothing inherently wrong about having a system like this, and they at least have it tie into the main story as much as possible. However, it feels superfluous outside of the battle benefits, and those benefits could have been implemented in other ways. It also leads to some lulls in the Triangulum arc where the plot comes to a halt to let you improve your standing with other characters. The Fate system is a bit of a glorified meter for how far you’re progressing certain party members’ character arcs. These arcs aren’t that great, mostly focusing on how to better oneself, but they work. I grew fond of the characters, which made up for the mediocre main story. Also on loan from Persona is Persona 4′s much lighter tone. Despite the more serious nature of the plot, it is a rather lighthearted game with some really fun moments that would have felt out of place in Devil Survivor 1. Instead of being stranded in a lock down, you’re aligned with a secret government agency and are allowed a bit of comfort, which gives the grim story a bit more room to explore less dark topics than Devil Survivor 1. The difference of your position, i.e., being aligned with the government instead of fighting it, and questions about how the powerful should aid the weak are brought up and factor heavily into the various endings.

From a nit picky standpoint, some of the character design is a bit on the lazy side. The main trio are basically the central trio from Durarara!, which is no coincidence given that they have the same artist. It sort of bugged me when I played the DS version but… nope, still bugs me, though your best friend’s yellow scarf is a nice touch for Durarara! fans. Also, while in Devil Survivor 1 police corruption was a major problem and the character portrait reflected the nasty nature of the cops, here cops are viewed much more favorably. However, they still use the shady cop portrait from Devil Survivor 1, which doesn’t match their dialogue. Finally, the added voice acting is expressive and adds layers not present in the old Devil Survivor 2, but the female assistant’s voice is rather grating.

In the past, I have derided Devil Survivor 2 for the crime of not being Devil Survivor 1. Having experienced it fully via the remake, I’ve come to appreciate it for its marked improvements to the gameplay and its unique tone and perspective. If you missed out on this game the first time around then this is the time to experience it. If you’re a Devil Survivor 2 veteran, the newly added scenario should give you plenty to chew on.