Off the Grid: A Look Back at Assassin’s Creed, Part 3: Revelations

Lockesly Winters has learned nothing.

All journeys must come to an end, and here I am at the last leg of Ezio’s tale as he seeks his ever elusive prize: answers. However, as Ezio’s time is coming to a close, Desmond is finally stepping up to his own destiny. In Revelations, Desmond’s stuck inside the animus—though  to be fair he’s been mentally stuck there for three games but now he’s physically stuck in the machine. It’s now Desmond’s time to define himself and put his ancestors’ stories to rest. Speaking of rest, I need a nap after this tedious game.

Revelations’ modern day sections take place right after the last game with Desmond strapped into the animus, reeling from his encounter with a Piece of Eden. What follows is Desmond diving into Ezio’s memoires to help him repair his own shattered psyche. This premise is an interesting twist on the recurring framing device used so far, even if it feels like we’re really stretching it by this point. The shining beacon here is that we finally get that sweet sweet Desmond development and backstory. As Desmond relives his time before the first game via bizarre first-person puzzle sequences, we get a better look at just how Desmond thinks. It’s nice to finally see some real insight into why he left the Assassins as a young man, while also highlighting how aimless his life became without them.

He’s a man without purpose and, when finally given some direction in previous games, he’s latched onto it with little thought to the danger. Which, in turn, landed him here, completely unable to define himself because he doesn’t even know who he is. He’s searching for that sense of purpose and self, alongside Ezio’s own search for answers. A key change in this is that the collectables scattered around this time are of no use to Ezio, but are instead used to unlock more of the Desmond sections. The stories of his ancestors—of Ezio and Altair—are closing out so that he can move on with the knowledge he’s gained from them. Honestly, my opinion of Desmond has changed because of this part of his journey. I always thought he was kind of a lovable dork, but now I see him as a sad man who is trying to make the most of his life despite not knowing how…. who is also still a lovable dork. 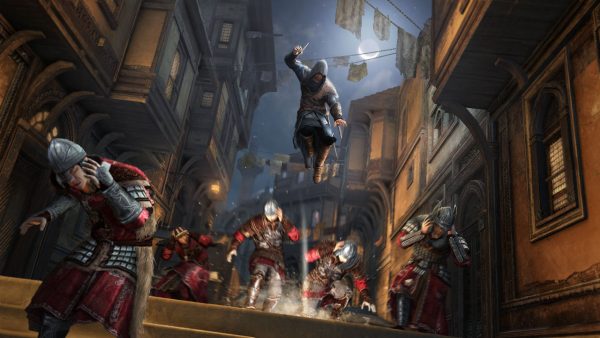 While Desmond is trying to better himself as a person, Ezio is getting involved in a dull tale of political intrigue. He originally came to Constantinople to find a secret vault of knowledge left behind by Altair. However his main focus is apparently getting involved in a local power struggle that is vaguely related to the overarching templar/assassin conflict. However Ezio is here for answers yet seems more concerned with the minor power plays for the Sultanate. Shezade Ahmet is the villain, I guess, who spends most of the game making vague threats and only acts when it’s absolutely necessary near the end letting his even scarcer subordinate handle Ezio. Why Ezio is concerned with any of this is not well explained, because the local chapter of Assassins seem to have the templar problem under control. I understand that the game wants to make the conflict more concrete between the factions, but all this probably could have been woven better into the hunt for the keys to Altair’s vault. Instead, the decidedly more interesting key hunt was pushed to the side.

They also took the time to derail Ezio’s character for no reason. He’s been a fairly morally good person despite the profession, but here it’s a lot of stab first ask questions later. Which is kinda weird for a guy who’s been doing this since the age of 20. At one point he nearly kills an entire city to get at the templars and yet no one calls him on it. No reflection on his part that this was a bad idea, or upon the consequences of the casualties he caused trying to kill one guy. All he can think about is, “I better save my girlfriend, who did nothing wrong.” The irony is as thick as Ezio’s old man skull.

The game mechanics follow the story’s example by trying too hard with expansion upon Brotherhood’s new mechanics and ways to do a murder. Taking back territory from the enemy and training your team of Assassins made Ezio’s time in Rome easier while also making him feel like a proper Assassin leader; here, both of these mechanics are overhauled to try to give them an end goal. The result is a tedious mess: with the constant threat of Templars regaining territory, a cool side diversion becomes a stressful component that needs to be constantly managed. 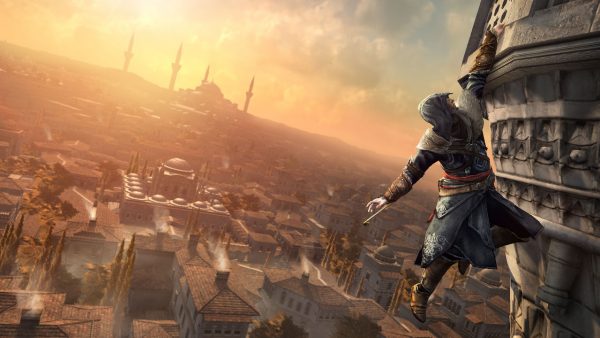 If your notoriety goes high enough, Templars will attack previously held bases which then requires you to play a horrendous tower defense game and, I’ll tell you, I played it safe enough the whole time to never have to do that particular game again outside of the tutorial. Tying into this is the fact that Ezio is repairing shops again, despite having no real reason to do so, and this raises notoriety as well. Which from a story perspective makes sense… that doesn’t make it good. All these mechanics helped strengthen Brotherhood’s story but add nothing to Revelations, and are here for the sake of being here. I’d be more willing to forgive it if they were still fun, but they aren’t.

Okay so I may have lied, the game has few cool things. First is the hookblade, a hidden blade extension that opens up new ways for Ezio to get around and murder guards. Riding one of the ziplines to get the jump on a target feels awesome and I really hope this thing comes back in the future. The game also tries to flesh out the assassin recruits with their own side missions, which gives them more character, as opposed to the more generic recruits of Brotherhood. Still, the missions centered around finding the keys are the only times the game started feeling fun. The missions to get them are varied and fast-paced action affairs that lead into Ezio using the keys to explore Altair’s memories. Yeah, Desmond is using Ezio’s memory to look at Altair’s past…a little silly but I’m here for it. It’s cool to see Altair again… after his last appearance being a roll in the hay.

Ezio’s story is finished and I’ll miss him, despite his swan song being mediocre. He’s grown from boy to man to leader and dammit I’ve got attached to this guy. However it’s time to move on to another ancestor and hopefully a Desmond that can finally stand proud.