Due Diligence: Among the Willows

Leigh Harrison finds it all a bit penny dreadful.

Rockstar games exhibit a confidence that borders on arrogance. I feel this everywhere in RDR2, from the languid movement speed of my character, to the frightful controls that stubbornly ignore a decade or more of nonpartisan standardization. Rockstar games do not follow, though nor do they really lead. They simply exist alongside all the other videogames; a different branch of the evolutionary tree, population: Rockstar.

I’m not sure I’ve ever genuinely enjoyed one of them, but I have been able to appreciate their ambition. I get the sense they are exactly as their creators intend them to be. That to Rockstar, they represent the pinnacle of what is possible at a given moment in time. RDR2 doesn’t convey this. It instead feels like a point of intersection where Rockstar’s hubris has finally outstripped its intent.

The game offers a miraculous world filled with systems, and stories, and exploration, all of which are, to varying degrees, fascinating and uniquely Rockstar. But despite this, RDR2 doesn’t aspire to anything beyond the original Red Dead Redemption. It is a 60 hour prequel-cum-justification of that game’s narrative shortcomings. A journey that, once I reached the end, showed itself to be entirely beholden to its destination, not the experience of getting there.

I play as Arthur Morgan, a burly outdoorsman type, all broad shoulders and gruff practicality. He is straightforward and thinks in terms of problems and solutions, and I like him immediately. That I can grow his hair and beard out to lumberjackean extremes only strengthens this affinity. His arc explores questions of morality and loyalty, and is probably Rockstar’s most thematically complete to date. Were he the story’s main concern, RDR2 would be a flabby but formidable character study of masculinity and Western tropes. In typical Rockstar fashion, of course, one main character is never enough.

Arthur is right hand man to Dutch van der Linde, the charismatic patriarch of a travelling band of outlaws. With three-piece suit, slicked-back hair, and pristine mustache, he is the picture of genteel villainy. His rousing speeches espouse loyalty and faith, as the men, women, and children of the gang hang on their every word. He casts himself as a Robin Hood figure, robbing from the rich to make some sort of statement about freedom or something. He’d sound, look, and act like an insincere manipulator, were it not for Arthur’s unwavering trust in him.

Another key member of the Van der Linde Gang is John Marston, a foppish lad in his late twenties and eventual protagonist of RDR. Dim, impulsive, and immature, he is a far cry from the stoic and dusty gunslinger he’ll become. Even his voice, which one day will be gravlier even than Arthur’s, is whiny and grating, as if not fully broken. I expected John to be mentioned, even to make an appearance in RDR2, but I wasn’t prepared for him being a key character, and one cast so far from his previous depiction.

These three men, then, make up the game’s narrative core: Dutch’s father figure and the perpetually squabbling brothers vying for his respect. And so it goes for a good long while. A motley family pulling together and pitching in. In good times and bad, the Van der Linde Gang search for the traverses the great wilds of America, seeking their fortune and a reprieve from the pursuing law. Neither, it transpires, will ever materialize. 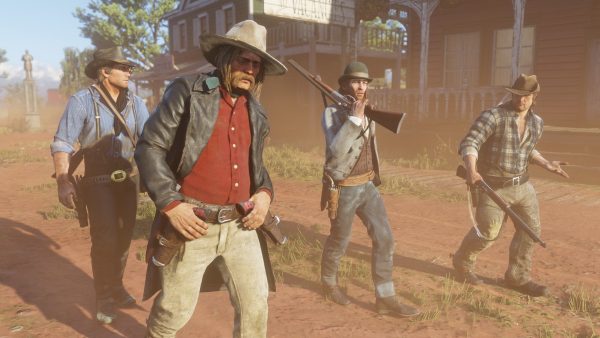 Through bank robberies, kidnappings, and holdups, Dutch begins to unravel. No matter how well he plans a job, something always goes wrong. As his schemes become more brazen and dangerous, few in the gang are willing to go along with them. He grows close to the psychopathic Micah Bell, a cruel sycophant whose only redeeming quality is has fantastic handlebar moustache. Together, they kill and maim with seeming abandon as the gang watches on aghast.

As Dutch slips further into mania, Arthur picks up the slack. He runs errands and fixes problems, listens, talks, and cares; holds people together amid the growing uncertainty. He even develops a good relationship with John, who he spends about half the game admonishing for being stupid and temperamental. It might just be the terminal TB diagnosis talking, but while Dutch is obviously incapable of caring, Arthur chooses to become the example and protector John needs. During the last third of the game the two share almost equal screen time, as if John were Arthur’s understudy, poised to take over as protagonist before RDR even begins.

After one too many failed heists and no sign of Dutch calming down, the Van der Linde Gang has all but disbanded. Micah, it transpires, has been ratting to the law for months, fueling the chaos that spurred Dutch’s downfall. Arthur rides to inform his remaining friends, knowing full well the truth will be ignored. A revolver aimed at Micah quickly becomes a full-blown standoff. Dutch, Micah, and the ever-loyal Bill Williamson and Javier Escuella on one side, Arthur and John on the other. Arthur and Micah notwithstanding, here are the main players of RDR’s tale of long overdue debts and inescapable fate. Whiskey around the campfire and fishing trip camaraderie mean little now. Much less in a few short years when all these men will be dead.

As law enforcement shows up to break the ceasefire the gang dissolves for good, Dutch and Co. turning tail and fleeing into the night. Arthur and John fight their way through open country for a time, until Arthur’s TB bids he go no further. Throwing John his hat and passing the torch, he sends his brother on his way and pledges to hold the line, finally becoming the man Dutch always attested to being. He’ll be dead by sunrise.

There’s a sense of unavoidable tragedy woven through RDR2 that extends far beyond it simply being a prequel. While it is bound by cardinal laws that cannot be broken and must ultimately lead to John Marston’s bullet-riddled corpse, this does nothing to dull its own acute atmosphere of foreboding. Knowing that Dutch and John must survive – and that Arthur will never be heard from again – did nothing to lessen the dread I felt throughout game’s slow build and tense climax.

This is because the game tells a relatable story, one of strained relationships and the limits of loyalty, that is far more harrowing than the revenge tale of the original. I might well be witnessing the breakdown of a family of outlaws, but it is a family nonetheless. Dutch’s transformation from caring father to ruthless pragmatist is slow and irreversible, and yet Arthur still rides to try and save him from himself, because loyalty and love are important. Seeing those things twisted, broken, and eventually discarded genuinely moved me. And as Arthur lay there, the screen already fading to black around him, I was glad he had finally found a purpose and some sort of peace.

But I don’t think Rockstar knows or cares how fitting this ending is. Because it isn’t the end. 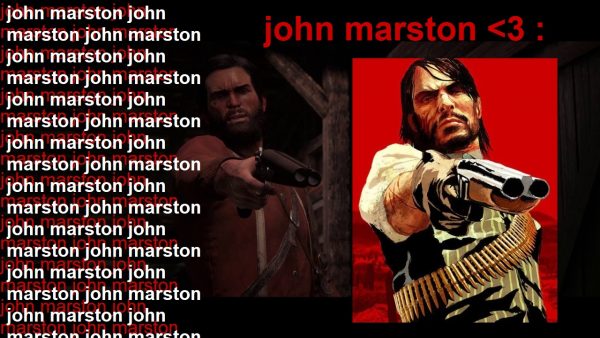 With Arthur gone, the game skips ahead in time and I finally get to play as John Marston – just like Rockstar thinks I’d always wanted to. John’s epilogue spans a few years and covers some ranchin’, some house buildin’, an’ some Micah killin’. It spoiled the whole game for me.

Thematically, it clearly tries to replicate the climax from the previous game. It starts off slow with some mundane chores and working the land, then builds to a dramatic denouement. The ending of RDR, in which John is betrayed, ambushed, and murdered in cold blood, was impactful because it was unexpected. Not strictly in its events – Westerns regularly kill off key characters – but in its cadence. That ending sequence is a couple of hours light on combat and heavy on characterization. John is reunited with his wife Abigail and son Jack, and spends most of his time with his family. Then, BAM, he’s dead. It’s a sucker punch, but one that works.

The prequel’s epilogue, for obvious reasons, couldn’t possibly pull the same trick. Instead, I’m thrown into a standoff between John, Micah, and Dutch that ends with Dutch shooting Micah. If there was ever going to be a swerve, this sure was it. I’m just not sure what it achieves beyond the shock value I saw coming a mile off. As the credits finally roll, silent vignettes show law enforcement tracking John, edging closer and closer to his idyllic homestead life. The last one shows them right outside the farm, practically itching to kick off the events of RDR.

It’s so unbearably neat. But worse, arrogant and distasteful. In its eagerness to lead so directly into its forbear, exhausting every possible thread between the two games, most of RDR2 vanishes into nothingness. Arthur isn’t really a character in his own right, but a conduit for backfilled narrative. He robs a bank with Bill Williamson. Fishes with Javier Esquella. Takes care of Jack when Abigail needs a break. He gets to know these characters so that I can look back on RDR and see depth and pathos where there was originally none.

In the last game, Bill was a hothead with a drawl. Javier was a Mexican in a sombrero. Abigail and Jack were family. I was told, in the broadest of terms, that John had a history with all of them – that they were Very Important. But I never felt it. Arthur exists solely to correct this and make RDR better, by finally making me care about those relationships. Arthur’s story becomes merely a pretext to a new beginning for John’s.

Rockstar may well have thought that when it launched in 2010, RDR was the peak of the developer’s creative ability. What’s obvious from RDR2’s structure is that, in the intervening years, RDR became a problem to be fixed rather than a lesson to be learned from. Had RDR2 ended with Arthur Morgan’s death, it would have been an exercise in subtle worldbuilding that deftly augmented the original while telling a story all of its own. But in continuing on for a dozen more hours with John as protagonist, it’s clear that Rockstar is still hung up on their eternal cowboy, unable to move on and tell other stories until his is perfect.

Midway through the epilogue, John gets into a scuffle with a bandit. Punches and kicks are exchanged until they wrestle to the ground. With John now straddling the outlaw, the camera switches to a cinematic angle down near the floor, looking up in worship at our protagonist. He’s brandishing a sawn-off shotgun in his right hand, perfectly recreating his pose from the box art of the original game. This isn’t a callback or a cute reference. This is hero worship.

Dry your eyes, Arthur Morgan. John Marston is the only gunslinger that matters.