Breath of the Wild, My Neighbor Totoro, and the Miraculous Healing Power of the Korok

Harry Mackin sees the forest for the trees.

My dad has always been a nature lover, and growing up, he did his level best to show me why. He never found much success on his own. When we would go on hikes or canoe I would try to gauge how long we would need to be at it before I could feasibly ask to go for ice cream; on the way home I would wait to command my Pokémon at every light on the highway so I could read the moves.

It wasn’t that I didn’t like being outdoors so much as I didn’t get it. I enjoyed playing outside with my sister well enough when we were pretending to be Link and Link’s little brother(?), whom we dubbed “Green.” That’s when it clicked for me, because the triangular stand of dinky little pine trees out behind my mom’s townhome became the Lost Woods, and the center of the triangle became the grove which held the Master Sword.

But hiking? It’s just rocks and plants and bugs. Exercise. There was nothing for a hungry young imagination to chew on, dammit! Or so I thought.

Then, one day – I must have been 10 or 11 years old – I was sick over a weekend. So my mom, looking to distract me so as to circumvent the melodrama passionately enacted by all sick and spoiled children, rented My Neighbor Totoro from our local Blockbuster, and we watched it from my sickbed.

Look, I know I can be a pretentious guy. I say art and media “changed my life” more often than I should. Then, when you press me for details, like all pretentious guys, I’m vague. But believe me when I say I know it about this one. For me, there is a before Totoro and an after Totoro. 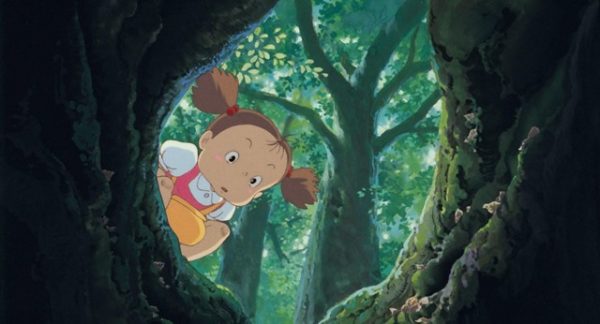 It made me want to be in the world. It made me want to discover the world. Suddenly, I was seeing my own imagination reflected back at me everywhere I went; seeing soot sprites in my grandparent’s attic and the Cat Bus returning alongside my dad’s car at night. Everywhere I looked, I could see what Mei and Satsuki learned to see: the spirits of the world. They, a part of me and me, a part of them. And the longer I looked, the more I saw and made and connected. Miyazaki has been quoted saying, “I would like to make a film to tell children, ‘it is good to be alive.'” Has any artist ever succeeded the way he did?

I remember another life-changing moment, albeit a slightly more complicated one: the first time I played The Elder Scrolls IV: Oblivion. I was at a friend’s house and we started a new game. As soon as we got out of the sewer Todd Howard got his hooks in me: I saw the mountain and thought, “can I climb that?”

They got formulaic at the exact pace everything else that suddenly makes all the money in the world does. Just Cause, Far Cry (at least Far Cry 3 and on), Assassin’s Creed; they weren’t bad games, but I was getting older. I could start to see the edges. It’s not even that I got cynical; I just burnt out. I still played any open world game I could get my hands on. I was a completionist freak; it had to be every side mission, collectible, hidden armor set or legendary weapon. That’s what these games were for, I told myself.

And in the process of wringing out my beloved genre, I started to see something: these games weren’t about exploration or discovery at all. The most fun I had with any open world game was the couple of hours when I first booted it up – both because that’s when I was still learning the rules and, most damningly, because that’s when open world games are interesting: before you’re in them. 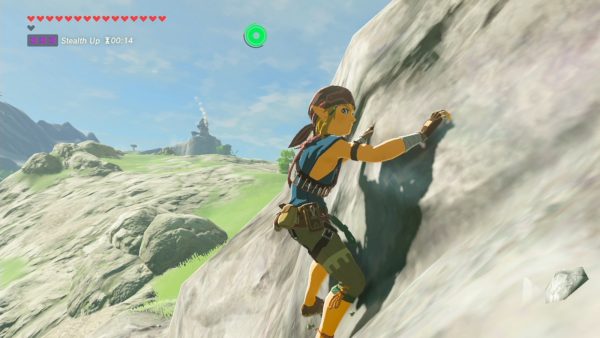 In 2014, as a disaffected intern at Game Informer, I read a piece of criticism that codified the exact problem I was feeling. It was when I read Austin Walker lament in “Real Human Beings“:

“And here, then, is the largest problem with these systems as they stand. No matter how many songs the Orcs of Mordor sing, no matter the desperation of the out-of-work Chicagoan teacher, all I can do is hurt people.“

In open world games, you turn the map from red to blue. You do this by plucking things out of it: collectibles, objectives, people. You replace these things either with nothing or with blue NPCs who stand around campfires awkwardly and respond to threats with barks and lethal force.

You are the reducer. You take the interesting things away and replace them with completion. I did this over and over again, until I stopped seeing the content-stuffed worlds as worlds at all, so much as checklists. Things I have left to turn blue; reduce.

I got tired. I stopped writing about videogames. I popped off in groupchats about how my once-beloved open world games represented “everything wrong with AAA game design” (lol). And then, in 2017, I found something I couldn’t reduce.

There are 900 koroks hidden in Legend of Zelda: Breath of the Wild‘s Hyrule. They fill every hidden nook and cranny of the world. There is a point to gathering their seeds, to a point, but that point isn’t to collect all of the seeds. In fact, if you do collect every korok seed in Hyrule, the korok you spent the game presenting the seeds to, Hestu, finally assembles them into their final form: Hestu’s Gift, a good luck charm called a “kin no unko” in Japanese. It looks an awful lot like a small pile of golden shit. 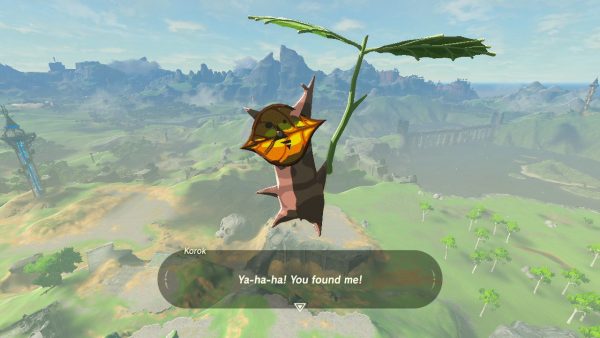 When asked, director Hidemaro Fujibayashi said, “we just kind of thought it would be funny to make that joke.”

A joke. Imagine how the completionist I had mutated into took that. Stomping around my apartment, gnashing my teeth and calling it “still better than Skyrim.”

Because that was the thing: I didn’t need to get the golden shit. I knew I didn’t need to get the golden shit. It was going to take me so long, and eventually I would have to use a guide, and then I’d just be turning from my phone to my screen in bed over and over for hours while my eyes got dry and aging back started to ache. And then the guide wouldn’t work and I’d have to find another one, but that one would have screenshots that are too small, or they would make a mistake, or pop-ups would keep interrupting me, so then…

As you can guess, I still resisted. After all, ok, so, but (I could hear myself argue): What are the korok seeds even for then, if not for neurotic completionists such as myself? What are collectibles for if not to be collected?

The sound a korok makes when you reveal its hiding spot is maybe my favorite in games. I loved it immediately and came to yearn to hear it. Ya-ha-ha! “You found me!” They’re always glad to see you. How nice, to find something that is glad to be found.

And then there’s how, after long enough, you’ll think you have finally figured out all of the korok’s tricks. That, while you may not find them all, you’ve at least plumbed the depths of their – and the game’s – tricky little secrets. But then you’ll turn a corner, or climb up a hill, or enter a new area, and you’ll see something that doesn’t look quite right, and you’ll learn the koroks still have secrets to keep.

But even that isn’t the point. The point of the koroks – the point of Breath of the Wild – is something that emerges so naturally you don’t see it coming until you’re swept up in it, something not at all unlike what Miyazaki accomplishes with My Neighbor Totoro: They create a world that is alive. A world that wants you – needs you – to be what it wants to be, to be complete. Just as badly as you need it. 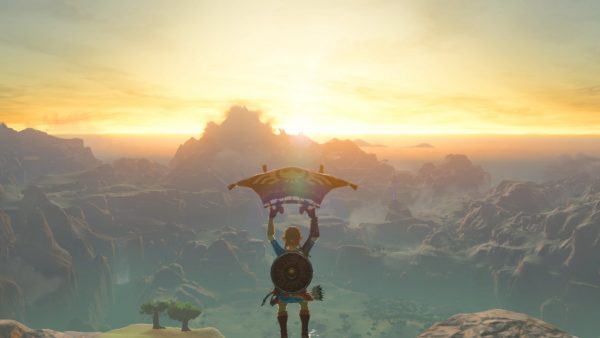 You’ll play Breath of the Wild for hundreds of hours. You’ll do the things you do in open world games – climb the towers to fill out the map, turn things from red to blue, turn collectable orbs into strength and stamina so you can turn more things from red to blue – and, strangely, you won’t get tired of it.

You won’t even notice you’re not getting tired of it. Because every time you start up the game, your eye will catch on something you somehow never caught before. Just a little break in the wild, like an interesting grouping of rocks, or a conspicuous flower at the top of a hill, or a series of smiling statues, one of them facing the opposite way as all its twins. And before you even have time to think about how long you’ve been playing or how long you think you have left to go, you’ll be ambling up a mountain toward that little break to find that korok who wants to be found.

Because Breath of the Wild wants you to know – or, rather, to discover – that you’re a part of it, just like everyone who labored over Totoro wanted you to learn what Satsuki and Mei learned that summer. You – not just your body, but your self, your mind, your imagination – are as much a part of the living world as anything else, and you are as much taking part in its making as it is in yours. Not reducing, but adding on, even just through simple observation.

I remembered what I learned from Totoro. We’re here to discover this world; to uncover, discover, or create meaning in every tiny, plausibly deniable pattern in the wild: under every rock and leaf and grouping of trees, every caterpillar working their way up a blade of grass, dragonfly hovering over a lake, cloud in the sky. Koroks hide to be found. The spirits of the world want you to see them for what they are; to see yourself for what you are. Ya-ha-ha!

Breath of the Wild doesn’t “reinvent” the open world game. In fact, I don’t even think it’s necessarily as “innovative” (whatever that means) as everybody says it is. You can still see the mountains and climb them. That’s not the point.

The point is, Breath of the Wild reveals what open world games should be – and can be, and, really, are. It made me want to play more. To add something. It doesn’t just make itself better for it; it’s like it heals the genre, or maybe the player themselves. At the very least, for me, it restored something I’d thought I lost. And after I play it, I want to go outside and be a part of something. Just like I felt after I first watched My Neighbor Totoro.

Harry Mackin is a semi-retired freelance videogame critic and full-time sellout. He also has two podcasts, Trylove and Stoop Kidz, neither of which are about videogames (they always said if you want to make it as a games writer, you should have interests other than videogames, after all). You can follow him on twitter, too, if you’re so inclined, but he can’t make any guarantees as to the quality of the experience.