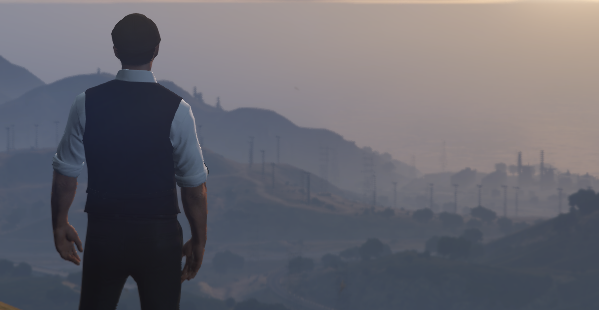 Art Tickles: Neither at Once

Los Santos looks magnificent from the top of Mount Chiliad. The sun sets over the ocean, orange ripples reaching inward toward silhouetted towers dotted with unfocused glints of yellow light. For a moment, the animals are the only sources of noise for miles.

The peace will never last, though. Grand Theft Auto Online is a place where at every given moment violence, gunfire, and panicked screams echo from elsewhere in the city. The sounds of rumbling engines and car crashes are never far, nor are sirens or alarms. Every corner turned is the potential for an armed stand-off with police, or a graveyard of burning shells and blood-soaked concrete. Or perhaps a single squad car, abandoned in the middle of the road, a spiderweb of bloodied cracks formed at eye-level on the driver’s side window.

Even outside of combat, Los Santos is full of sound and fury. Pedestrians will jeer and cars will honk. The tenor of the city is one of barely contained anxiety. Every moment seems poised to upset the tenuous balance, sending half of the city into a frantic run, while the other half draws weapons and joins the fray. Even if you try to carefully follow the rules of society, the world hardly notices, instead the pedestrians recoil every time a player on a bicycle rides carefully beside them or parks a car in the spots designated alongside the road. The apparent expectation is that any given moment is seconds from violence or ruin.

Sometimes, without cause, motorists will freak out and start a chain reaction of chaos. A passing car will veer for no reason. Some accelerate suddenly into walls. Police may inexplicably ram cars while leaving the scene of one crime, only to find whomever they’ve run into guilty of another, and open fire. There are no arrests in Los Santos. Those deemed criminals are executed. 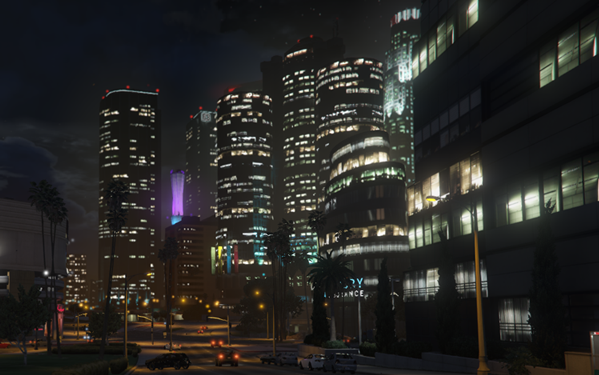 It feels as though the world itself resists any effort to follow the rules. Most cars have a speed and traction level that’s well suited to a certain speed (fast), and going too slow makes the cars feel jerky and clumsy. It’s hard to make subtle corrections at low speeds, and though the lanes are decently wide within city limits, it’s still far too easy to accidentally clip a curb or fail to stop at the intersection as a light turns yellow. It’s hard to moderate speed, cars can either feather the accelerator, or punch it toward top speed without an in-between. There’s no way to signal, and other drivers don’t, so occasional smooth drives might give way to panicked swerving as a low-rider cuts off passing traffic. By design, driving wrong is easier, faster, and at times less likely to cause accidents. Even without factoring in intentional violence, crime is both expected and encouraged.

From the mountain, though, the faraway city could be mistaken for a peaceful place. The explosions don’t stop, nor do the occasional echoes of sirens rising through the treetops, but it looks beautiful. The biggest struggle is that Grand Theft Auto Online is exhaustively gorgeous. The city feels natural, a hodgepodge of architectural styles and income levels. A given block could contain cheap apartments, low-roofed houses, or glittery high-rises. Alongside the neighborhoods and residences are convenience stories, corner shops, banks, clothing stores, gun shops, and golf courses. There is a teeming city there, traffic fills the streets at any hour, as do the people on the sidewalks. Pedestrians stand in loose groups, smoking or looking at their phones. Although they are computer generated, and ultimately purposeless, they still fill the city with such a convincing facade of life.

In theory, the decadent details could support a peaceful play experience. The violence could be the only part of the game. With both in the mix, it feels like there could be a way to find harmony between the peace and the chaos, but there isn’t. You can’t have both.

GTAO makes an effort to populate the city with people, but their interactions are limited to cruelty, violence, and fear. During armed conflicts, even non-police officers may produce weapons and join the fray, often from unknown angles. Sometimes motorists ripped from their cars will place bounties on players, rather than calling the police. Inexplicably, few victims of carjacking will call the police at all, as if car theft is an inevitability. Moving from menu to menu will often lead the character to producing a weapon, and appearing into the world with a gun at the ready. The world is pretty, the people are meant to seem normal, but their taunts, jeers, and violence feel unerringly near, just waiting for the first excuse. The motto in blocky letters on the side of the Los Santos Police Station is inlaid in paint on sculpted stone: “Obey and survive.” 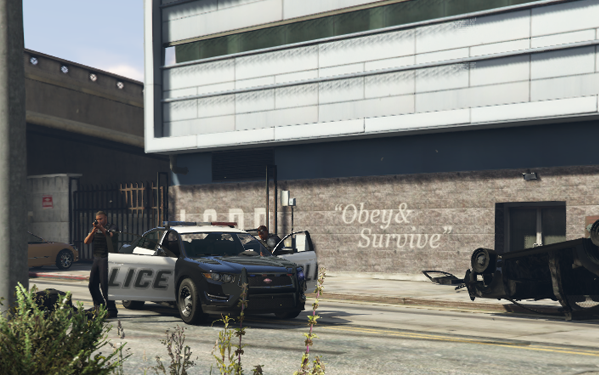 The little details are perfectly sculpted, the sounds of nature unburdened by passing combat jets or discordant sirens are wonderful, but the spirit that should follow the lead of these lovely details never does, and it leaves the city feeling dissonant—detailed to perfection then rammed by an armored van.

Surrounded by a population of psychopathic criminals, all armed to the teeth with hardware paid for by lucrative crime, players often feel the same constant vulnerability that plagues the non-players. Other players seen approaching on the minimap feel like a threat. Will this person be wearing a racoon mask, riding on a scooter that plays La Cucaracha, brandishing a broken bottle? Will the player be in a rocket-powered car that can take flight and rain down homing missiles? Will it be an armored truck full of automatic rifles that pepper the ground in 5.56 death? Or will it simply be another passing motorist, albeit one that casually disregards traffic law?

Mired in this world of crime and death, where laws exist to be bent or broken for leisure, there’s a sense of disconnect. There’s so much to do in Los Santos. There are so many stores, cars, clothes, shops, events, gang fights, attractions, and details, but it all feels like it’s just set dressing for more crime.

Somewhere up in Chiliad’s hills, poised a dozen miles from the thick of the city, it’s easy to stop and just take in the view. The sunsets are beautiful. The ocean looks gorgeous. At night, the city gains a yellowish hue of artificial light, and even distant glints of yellow artifice are arresting. Los Santos is indulgent, a treat for the senses, and for the briefest moments, a study in the kind of aesthetic that costs millions of dollars to live amongst sweeping landscapes and aesthetically decadent urban sprawls. In brief, breathtaking. Then a jet bathes the area in explosions, and the view is stolen away in fire.

You can’t have both.